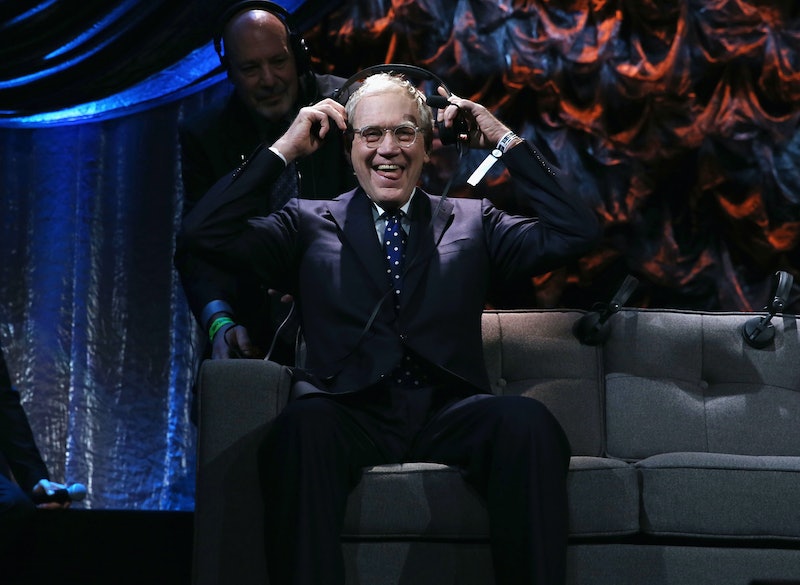 And just like that, the entire late night landscape has changed hands. According to an insider at the taping of Thursday's edition of The Late Show, the longtime host of the late night talker, David Letterman, announced his plans to retire in 2015. The news was first announced by one of the evening's guests, Mike Mills, in a tweet sent out earlier today. "Dave just announced his retirement," the musician tweeted, adding the hashtags "#2015 #muchlovedave" to the end. This was later confirmed by CBS News to several outlets.

The news marks the end of the comedian's 20-year run on CBS’ Late Show, which was a postscript to his 11-season run as the host of NBC's Late Night (y'know, before Conan). And, of course, who could forget Letterman's own place in the infamous — and original — late night wars between himself and Jay Leno.

The news isn't surprising, all things considered. Back in October, Letterman had extended his contract with the series through the end of 2015 (only two years), indicating to many that he was slowing down. And now, with his former rival Jay Leno out (for good, it seems) at the Tonight Show now that Jimmy Fallon holds court there, it seems as good a time as any for the vet to step down. Now, if only CBS would consider a woman or person of color for the chair (we've long wondered why women are constantly not considered for the major late night posts), but it seems a perfect time to mention that, cough cough, Chelsea Handler IS leaving E! and Chelsea Lately at nearly the exact same time.

More like this
Jinkx Monsoon Is About To Get Real Sketchy
By Sam Ramsden
Twitter Is Saying The Same Thing About Roger Federer’s Retirement From Tennis
By El Hunt
Courteney Cox & Jennifer Aniston’s Latest 'Friends' Revival Is Everything
By Darshita Goyal
What’s New On Netflix: Ana De Armas’ 'Blonde' & A Nick Kroll Special
By Arya Roshanian
Get Even More From Bustle — Sign Up For The Newsletter