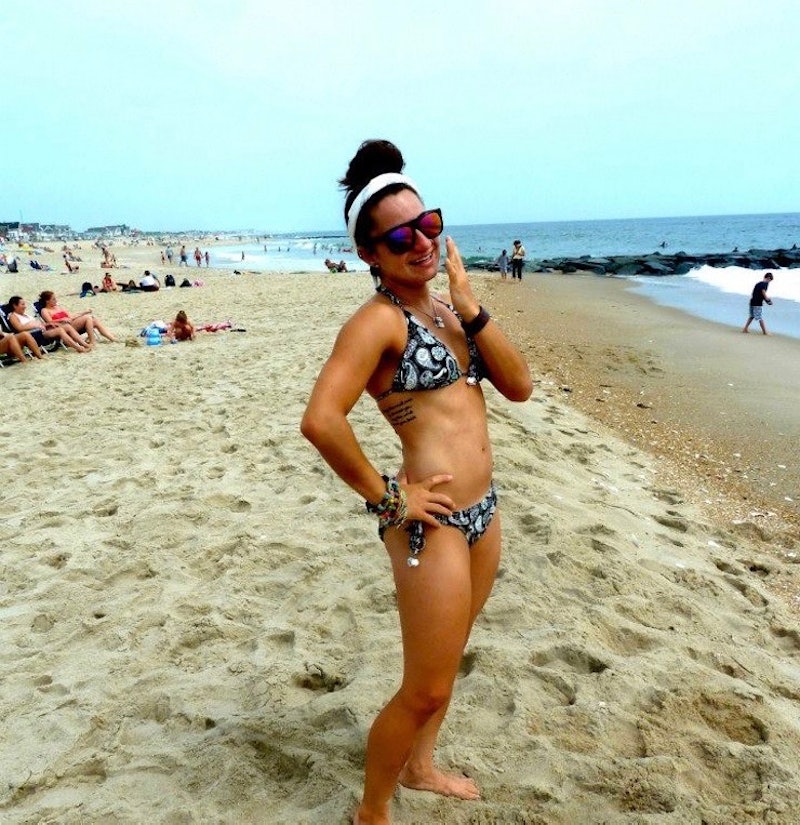 I have strong, broad shoulders and ropy back muscles. On my better days, I imagine that I have the arms of Michelle Obama and the abs of Ronda Rousey. I have the thick, defined quads and calves of someone who has been playing sports for over two decades.

By most accounts, I adhere to conventional Western beauty standards. I am petite and trim. Since the dawn of the fitspo, athletic bodies are more “in” than ever, and I align with this idealized version of the female form. By all outward appearances, I am the Instagram-ready depiction of feminine health.

I may look #swoleselfie ready, but what most people don’t know is that I actually suffer from an eating disorder. The truth is, eating disorders, like pretty much all mental illnesses, are notoriously difficult to diagnose. With overlapping symptoms, individual differences among patients, and subjective diagnostic criteria, it can be difficult for even seasoned therapists to diagnose an eating disorder.

For the longest time, I certainly didn’t truly recognize the extent of my issues. After all, I wasn’t rail-thin. I wasn’t fainting in the hallway like Miranda from that one episode of Lizzie McGuire. I certainly wasn’t ready to be laid up in a hospital bed and hooked up to a feeding tube, like that one girl from freshman year homeroom, so I couldn’t possibly have an eating disorder, right?

I was able to ignore some of the more subtle indicators that I had an eating disorder primarily because I didn’t experience too many of the very common ones. It's the type of logic that alcoholics and drug addicts employ: if I’m not at rock-bottom, it can’t be that bad.

Like many pre-teen girls in America, my body image issues began when I hit puberty in middle school. It was easy being the cute, scrawny kid with knobby knees, adorable bangs, and a wiry torso. It wasn’t so easy being the pudgy sixth grader with awful eyebrows. But with all of the awful changes that middle school brought, it did introduce me to the one thing that changed my life: field hockey.

My eighth grade best friend encouraged me to try out for the team. “It’s not that hard, and you probably won’t get cut since you’re an eighth grader,” she told me. I made the team, and thus began my career as a varsity athlete.

Now playing a varsity sport, I noticed that I lost a little fat and gained some muscle. My body composition changed with each field hockey season, accompanied by summers spent running on the boardwalk and spring semesters filled with lacrosse. It seemed obvious, but it was the first time I made the connection that sports and fitness could mean having a conventionally attractive body.

I managed to make it through high school without having any eating disorder drama. I watched what I snacked on, I was busy with sports, and my mom cooked healthy dinners. What did I have to worry about?

Everything changed when I got to college. I wasn’t used to the freedom of an all-you-can-eat self-serve dining hall. Field hockey practice was a lot different than at the high school level, with less in-season focus on conditioning and more focus on developing technical skills. Coupled with normal late-adolescence weight gain, I began obsessing over my appearance. I would check my stomach in the mirror constantly, and assess my face for any double-chins that may have been lurking. It was also around this time that I started experimenting with diet restriction. I pretended to be a vegetarian for six weeks, but I really just wanted to see if cutting out meat would make me any skinnier. Spoiler: it didn’t.

Things didn’t truly get out of control for me until my spring semester junior year, when I studied abroad in Spain. I was excited for the program, but I was also incredibly nervous. I had signed up for a full immersion program, where I would be living with an older, unmarried señora in her apartment. As Spanish major, I knew a homestay would let me practice as much Spanish as possible. I wanted the authentic Spanish experience, and I knew that boarding with a Spanish señora was the best way to do it.

Going in, I knew I would have to be flexible with my carefully-regimented lifestyle. It would be rude to barge into her house and make dietary demands. I was eager for the immersion experience, so I ignored every instinct telling me that this living arrangement could potentially be a bad idea.

My señora was lovely, but she was also the world’s worst and unhealthiest cook. Spanish food is not known as particularly healthful, with dietary staples consisting of cured meats, rich cheeses, and fried foods. Whole grains and kale are just not a thing in Spain. My señora also admitted she “didn’t care to eat healthy,” and looked at me like I was a maniac when I told her some of my favorite foods were raw veggies and plain, grilled chicken.

I didn’t want to offend her, so I ate her greasy empanadas and oil-soaked lettuce for five months straight. I took full advantage of Salamanca’s bustling nightlife scene, and spent many nights drinking cocktails served by the liter and scarfing down doner kebabs at four in the morning. All of this la vida loca left me with a new reality: I was more than 15 pounds heavier.

Great, I thought, I can’t even have an eating disorder correctly.

During the semester, I kept telling myself to ignore the weight gain and just enjoy my time in Europe. Everyone gets a little pudgy when they study abroad, right? Coming back to America was a crash-landing back to reality. If gaining weight induced my anxiety, then the process of losing it drove me absolutely crazy. I had always been body-conscious, but now I was obsessive about my appearance.

As punishment, I mistreated my body in the worst ways. I starved myself, often jerking awake at 6 a.m. from hunger pangs. I experimented with bulimia, but could never even binge enough to induce vomiting. Great, I thought, I can’t even have an eating disorder correctly. For one entire summer, I cut out carbs entirely — and I mean entirely.

I gave myself migraines from messing with my blood sugar levels. If I was going out, I just wouldn’t eat, because I didn’t want to “look chubby.” Spending two hours at the gym, seven days-a- week, was standard. It only took me a few months to lose my “Spain weight,” but I kept pushing my body harder, masquerading my disordered behaviors as “physical fitness.”

I hit rock-bottom when I nearly fainted at the gym. My research meeting ran later than expected, and it was almost time to meet a friend for dinner. I was starving. I can’t eat dinner if I don’t do at least a high-intensity power lift routine, I frantically thought as I raced to the gym. The thought of only working out for only 45 minutes induced sheer panic in me. Mid-way through my work-out, I got dizzy and lightheaded from doing a set hang-cleans and almost dropped the bar on myself. I was so weak from hunger I couldn’t even clear 65lbs — something that was once easy for me.

I learned that EDNOS is hardly talked about — even though 70 percent of people with an eating disorder fall into the EDNOS category. It is the label for the standard illness of our culture.

Earlier that day, a girl I barely even knew approached me in awe and said, “Ray, I’ve been meaning to ask you … how did you get so skinny?” At the time, I radiated from her compliment. But now, after fainting in the gym, I just felt like I was cheating myself out of health and happiness. That was my wakeup call; I soon realized that I was merely rationalizing my behavior. After doing some research, I realized that I most likely suffered from Eating Disorder Not Otherwise Specified (EDNOS). Also called OSFED, this diagnosis describes people with eating disorder symptoms not fitting neatly into the “anorexia” or “bulimia” categories. Inconsistent purging behaviors? Anorexia minus the extreme, dangerous weight loss? Obsession with exercise as a form of weight management? Extreme preoccupation with food and physical appearance? It was like someone had studied my behavior over the last few years and created a diagnosis just for me. Most shockingly, I learned that EDNOS is hardly talked about — even though 70 percent of people with an eating disorder fall into the EDNOS category. It is the label for the standard illness of our culture.

In an effort to get healthy, I started doing more research and spoke to a therapist about my issues. I made a conscious effort to be mindful of my food choices by strategically planning my meals, helping me make sure that my body is taken care of after the gym. I also started testing myself with "cheat meals," and realized that the world wouldn’t come crashing down if I ate a slice of pizza once in a while. Within months, I started seeing more positive changes in my body. I was eating more, spending less time at the gym, and was looking healthier than ever before — probably because my body wasn't starving anymore. More importantly, I was no longer obsessing over my body or panicking if I had to skip Leg Day.Of course, when it comes to having an eating disorder, a happy ending is never so simple. I still fight the body image issues that I’ve dealt with since middle school. But one of the best ways I now combat these negative thoughts is by focusing on what my body can do, rather than just how it looks. After all, this is the body that ran a half-marathon, loves to paddle board, and has played in countless field hockey games. I should be proud of it, and treat it kindly.

More like this
Bustle Newsletter: August 15, 2022
By Stephanie Talmadge
Megan Thee Stallion Actually Auditioned To Be This 'P-Valley' Main Character
By Radhika Menon
15 Photos Of The 'House Of The Dragon' Cast At The Show's UK Premiere
By Radhika Menon
'The Bachelorette’s Logan Was Sent Home Early After Testing Positive For COVID
By Kadin Burnett
Get Even More From Bustle — Sign Up For The Newsletter