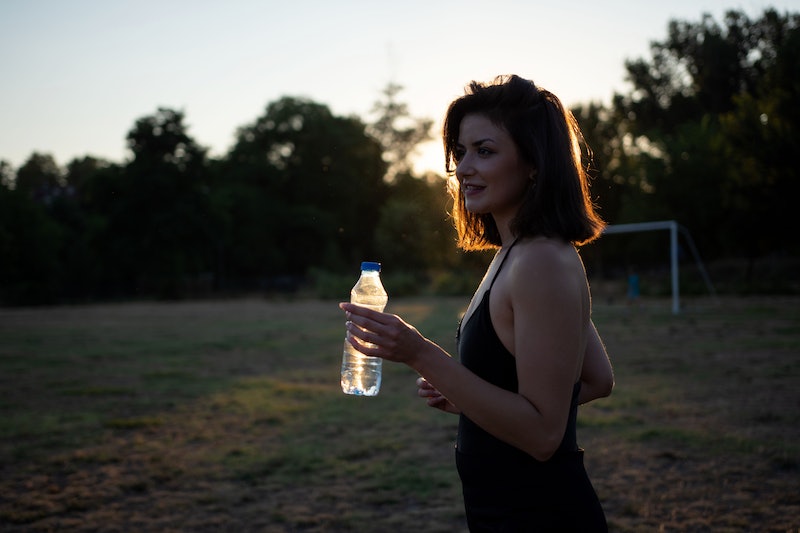 According to the National Eating Disorders Association, (NEDA) 20 million women and 10 million men suffer from disordered eating in the United States alone. So even if you've personally never struggled with an eating disorder, the chances that someone you love could be suffering from an eating disorder are, unfortunately, quite high. Eating disorders are isolating, and they simultaneously damage the mind, body, and spirit. What's worse, though, is the fact that most people who struggle with disordering eating are far too ashamed of their illness to reach out for the help they need. Instead, they often learn how to become extremely discreet about their disordered eating habits. Because of this, it's so important to learn how to spot the signs of an eating disorder.

When I was in high school, a very dear friend of mine was suffering from bulimia nervosa for years before anyone in our friend group realized what was going on. She was a fantastic student, a talented athlete, a thoughtful friend, everyone wanted to date her, and she mostly ate well, too. So when I found out she'd been suffering from bulimia for some time without me being any the wiser, I was shocked. When I look back on that time now, however, I realize now there were actually many signs that my friend was suffering from disordered eating. I just didn't know how to recognize the signs of an eating disorder.

If you think someone you know might be struggling with an eating disorder, then read on.

1. Their Weight Has Been Increasing Dramatically

This sign of an eating disorder mainly applies to those suffering from binge eating disorder or bulimia nervosa. Contrary to popular opinion, people struggling with bulimia are typically a "normal" weight. Even more surprising, though, is the fact that bulimia can actually cause weight gain. According to Psychology Today, this has a lot to do with the binge-purge cycle that bulimics go through. Writer Nancy Matsumoto puts it this way in her post on the topic:

"Although the reasons for such weight gains are still unclear, one possibility is that bulimia patients tend to be higher weight than their peers, which leads them to begin dieting. When weight reaches borderline or underweight levels, we know from studies on starvation that bingeing is a likely response. Phobic about the large number of calories consumed, the patient begins to purge, setting off a vicious binge-purge cycle."

If you've noticed your loved one's weight has been fluctuating, and they're not dealing with any other illnesses or medications that might be to blame, it's very possible that they may have an eating disorder.

This one may seem like a pretty obvious sign of an eating disorder, like anorexia nervosa, but it can also be mistaken for successful dieting and a disciplined exercise regimen.

If someone loses a lot of weight, seemingly overnight, it's highly likely that you're going to notice something is off; but even if you say something about it, your loved one may succeed in convincing you their weight loss is a good thing. In my experience, people suffering from anorexia will claim they're eating normally, but just "cutting carbs," or "working out a lot."

Additionally, if your friend is acting happier than ever about their new weight, you may be afraid to put a damper on their happiness by approaching them about their dramatic weight loss. That said, it's really important not to ignore this sign of anorexia, because anorexia can take a devastating toll on the heart, and it has the highest death rate of any mental illness.

Some people just prefer looser-fitting clothing, so if you have that one friend who always dresses in baggy clothes, that doesn't necessarily mean they're suffering from an eating disorder. It could just mean they dig a good, relaxed fit. However, it's not uncommon for someone dealing with disordered eating to avoid tight clothing, because trading tight outfits for baggy clothes is one way to conceal drastic weight loss.

If your loved one used to love more revealing clothing, but lately she's been wearing clothes that are clearly way too big for her, she might be trying to hide what her eating disorder has been doing to her body.

Exercising daily is not necessarily indicative of an eating disorder. Personally, I try to exercise daily because it helps me manage my anxiety and body image issues. Some people enjoy working out and that can be really healthy.

5. They Don't Like Eating In Front Of Other People

If your loved one frequently turns down invitations to eat with you, or they meet you for lunch but will habitually claim that they've already eaten or that they're just not hungry, then they might be suffering from an eating disorder.

Moreover, if your friend admits to experiencing anxiety at the thought of eating in front of others, that's a clear sign that they need help. Even if this anxiety isn't being caused by an eating disorder, it could be a sign that your loved one is dealing with some pretty severe social anxiety. Either way, reach out to them about it.

6. They Brush Their Teeth, Pop Mints, And/Or Chew Gum Excessively

If your loved one always has a pack of gum with them, that doesn't automatically mean they're suffering from disordered eating. It could just mean they really enjoy gum. That said, if they chew gum, pop mints, and/or brush their teeth excessively, that might be a sign that they're trying to conceal, and also overcompensate for, what bulimia is doing to their oral health.

7. They're Obsessed With "Clean Eating"

This sign of an eating disorder can be particularly hard to spot, because if your loved one's obsession with diet is not necessarily to eat tiny portions, but to only "eat clean," then it's easy to mistake their fixation with "righteous eating" as a healthy habit. Unfortunately, though, this could mean they're actually suffering from orthorexia.

Dr. Steven Bratman, MD, who recovered from the disorder himself, coined the term "orthorexia" back in 1996. This is what he had to say about what it's like to be orthorexic:

“I pursued wellness through healthy eating for years, but gradually I began to sense that something was going wrong ... My ability to carry on normal conversations was hindered by intrusive thoughts of food. The need to obtain meals free of meat, fat, and artificial chemicals had put nearly all social forms of eating beyond my reach. I was lonely and obsessed…I found it terribly difficult to free myself. I had been seduced by righteous eating. The problem of my life's meaning had been transferred inexorably to food, and I could not reclaim it."

I'm not suggesting everyone who eats clean is suffering from an eating disorder. However, if your loved one is obsessed with eating strictly "clean" foods, then it's quite likely they have an unhealthy relationship with food at best, and orthorexia at worst. If they're obsessed with only putting what's totally healthy and "right" into their bodies, then they could be orthorexic, and they might need your help coming to terms with that fact.

8. They Make Lots Of Comments About Being "Fat"

If your loved one frequently refers to themselves as "fat," or they seem to be obsessed with their perceived, physical "flaws," then you should know that they might be struggling with body dysmorphic disorder (BDD).

Although BDD itself isn't an eating disorder, it's not uncommon for people suffering from BDD to develop eating disorders. Because of this, and because BDD can get so bad that about 25 percent of those struggling with the disorder may attempt suicide, it's imperative that you don't write off your loved one's excessive comments about being "fat" as run-of-the-mill body image issues. Reach out to them about their preoccupation with body image. You can't force them to get the help they need, but you can always listen to whatever it is they might need to say.

9. They Love Preparing Food For You — But Won't Eat Any Of It Themselves

Though they won't allow themselves to enjoy the food they're cooking, it's very common for people struggling with eating disorders to spend hours cooking for their loved ones. According to Psych Central, a person's preoccupation with cooking can signal that they're struggling with disordered eating.

In the post, Cooking Can Signal Eating Disorder, writer Rick Nauert states, "Excessive cooking or preoccupation with food may signal an eating disorder like anorexia." He then goes on to quote Theresa Fassihi, PhD, a psychologist with the Eating Disorders Program at The Menninger Clinic in Houston: “Many persons with eating disorders love to cook and will constantly cook and bake for their family or friends. They may bake all day, but not eat a single thing themselves.”

If you think your loved one might be struggling with an eating disorder, don't wait for them to reach out to you about it. As we've established, eating disorders are isolating, shrouded in fear and shame, and incredibly dangerous to both physical and mental health. Although confronting a loved one about their possible disordered eating won't be easy, and it will quite likely upset them, it's simply not safe to ignore the signs of an eating disorder.

And if you see yourself in these signs, know that you're not alone, and help is available.

More like this
Ashley Benson Revealed The Whole-Body Effects Of Her Anxiety On TikTok
By Stephanie Topacio Long
This Company Will Send STI Tests Right To Your Door
By Lexi Inks
35 Genius Secret Santa Gifts For Someone You Don’t Know Very Well
By Rebecca Deczynski and Lauren Grant
I Visited Remedy Place, The Social Club Transforming The Wellness Industry
By Rachel Lapidos
Get Even More From Bustle — Sign Up For The Newsletter