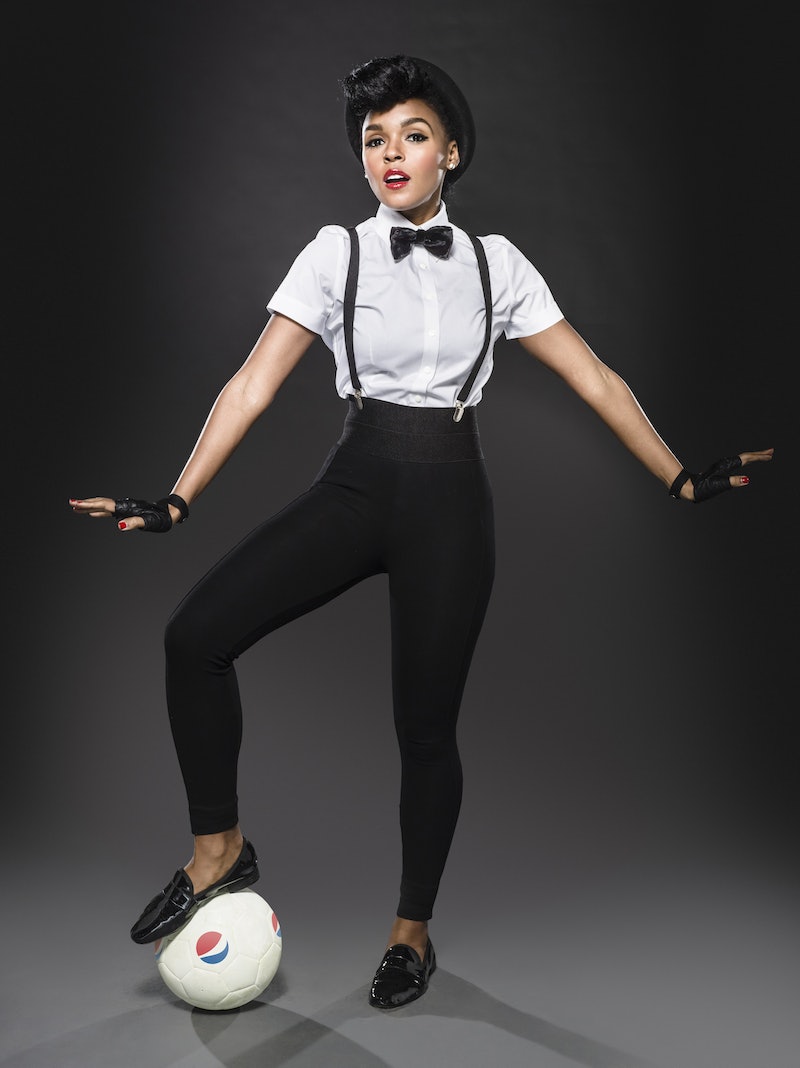 If you subscribe to the belief that soccer fans are completely nutso, then brace yourself for more insanity as boisterous fútbol aficionados now have a new, justified reason to elevate their wild and out-of-control antics to the next stratospheric level. Why, you ask? Because Pepsi announced singer Janelle Monáe is part of their "Now Is What You Make It" 2014 global fútbol promotional campaign. Joined by the who's who of global soccer athletes, the "Tightrope" singer is featured in the newly released ad singing a cover of David Bowie's "Heroes," which assures us that "we can be heroes, just for one day." The campaign comes just ahead of the 2014 World Cup, which will take place in Rio de Janiero. Monáe is the perfect choice for this partnership and here's why:SHE AND FÚTBOL FANS SHARE A COMMON CHARACTERISTIC

One word: energy. Monáe's vivacious persona should definitely resonate with fútbol fans, who have a well-deserved international reputation earned by their own special brand of enthusiasm. It takes a rowdy person to know one, therefore fútbol lovers will have no choice but to embrace Monáe due to her eye-popping performances, which often involve her leaping, dancing herself into a frenzy and executing one-legged, cross-stage slides that would make James Brown proud. Also, she does stuff like this:

MONÁE'S HAD SUCCESSFUL PARTNERSHIPS WITH OTHER MAJOR BRANDS

In 2012, CoverGirl announced Monáe as their newest face. She's since appeared in a commercial for Sonos and partnered with American Express for a New York Fashion Week performance, then followed up with the exclusive release of her album The Electric Lady in Target stores. More recently, Samsung featured her at South by Southwest. With this exceptional track record, the Pepsi deal seems fitting for Monáe.

SHE'S A DIVERSE ARTIST WITH A STRONG ARTISTIC MESSAGE

Her wardrobe may be mostly black-and-white, but Monáe fearlessly colors outside the lines. Her music is very diverse and oftentimes resists definition. Last year, she won her first Grammy for her collaboration with Fun. on the hit song "We Are Young." She's also set to perform a hologram collaboration alongside M.I.A. and has made beautiful music with Prince, Erykah Badu and Miguel. Oh, and the president loves her.

Take a look at the new Pepsi spot below:

More like this
Jake Daniels Just Became The UK’s First Active Football Player To Come Out As Gay Since 1990
By Sam Ramsden
What Is Jeanie Buss' Net Worth? The Lakers President Is Uber Rich
By Hugh McIntyre
Twitter Has Very Mixed Feelings About The New 'American Idol' Winner
By Jake Viswanath
Halsey Calls Out Label For Asking Them To "Fake A TikTok Moment" For New Song
By Jake Viswanath
Get Even More From Bustle — Sign Up For The Newsletter