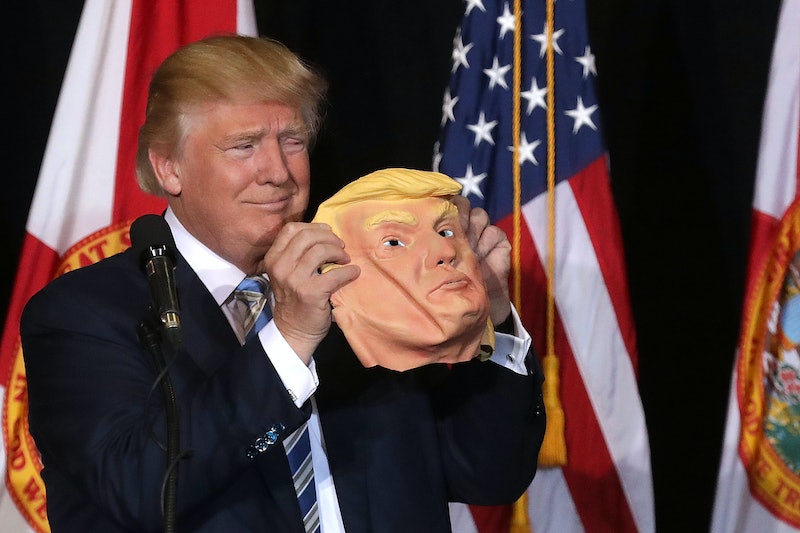 Much has been made about Donald Trump's very unpresidential behavior, both before and after the presidential election. He sends out a flurry of angry tweets at 3:30 a.m., takes undiplomatic calls from the Taiwanese president, and seems to be prepping the Oval Office for his daughter, Ivanka. He has also insulted just about every class of people in the United States, and recently went on a Twitter rampage against union leader Chuck Jones. But Trump's latest unpresidential tweet may be the most "unpresidented" yet.

Trump sent out a tweet on Saturday morning with the most hilariously apt typo. The president-elect tweeted: "China steals United States Navy research drone in international waters — rips it out of water and takes it to China in unpresidented act."

It's obvious that Trump meant to write "unprecedented" in that now-deleted tweet, but it was too late. Twitter swiftly capitalized on Trump's major autocorrect fail (in what might be one of the best autocorrect fails in Twitter history).

Trump's latest social media bluster also comes at a time when the Electoral College, which is still waiting to vote on his presidency, is being rocked by groups of faithless electors determined to block the billionaire businessman from reaching the White House. Maybe the president-elect is feeling what we're all feeling right now in America: that Trump should be "unpresidented" immediately. These 14 tweets are some of the best aims at Trump's "unpresidented" moment:

Where Did Trump Learn To Spell?

The Most "Unpresidented" President, Ever?

Of Course George Takei Caught It

The best response to Trump's "unpresidented" act came from journalist Keith Olbermann, who posted a series of tweets Saturday morning skewering the president-elect.

Could Trump be unpresidented even before reaching the White House in January? A group of faithless electors is trying to block Trump from officially winning the election. The electors meet on Dec. 19 to formally cast their votes, and while it's unlikely Trump will be stopped, there is still room for an elector revolt.