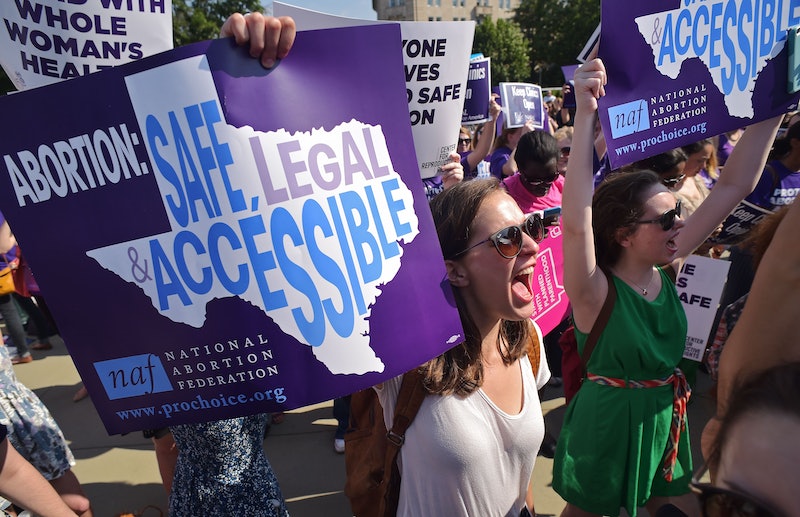 When the Supreme Court ruled last June that a Texas law requiring all abortions to be performed in ambulatory surgical centers actually placed an undue burden on women seeking the procedure, it seemed like all would be quiet on the Texan front. But Texas policymakers, apparently fueled by the loss at the Supreme Court, had other plans for the state's abortion providers. The state tried implementing a new rule in December that would force women having abortions to either bury or cremate the fetal tissue. Now, a federal judge blocked the new Texas fetal burial rule on Thursday, but the injunction is only temporary, as reproductive health advocates in Texas prepare for another fight over abortion rights.

U.S. District Judge Sam Sparks issued a temporary restraining order after the Center for Reproductive Rights — which previously won the Supreme Court case over the ambulatory surgical center requirement — filed a lawsuit challenging the new fetal burial rule. The rule would have gone into effect Dec. 19.

David Brown, a senior staff attorney for the Center for Reproductive Rights, said in a statement sent to Bustle:

We are pleased that the court has prevented these outrageous restrictions from going into effect in Texas, where they would have created immediate and dangerous new barriers on women’s access to health care. We look forward to demonstrating that these regulations are unwise, unjustified and unconstitutional, and should be permanently struck down.

The Center for Reproductive Rights will return to court in early January. Stephanie Toti, the attorney who successfully fought Texas' ambulatory surgical center requirement at the Supreme Court last spring, is also one of the attorneys litigating this case. While this is a big, temporary victory, it's not over yet — and its conclusion could impact other states where abortion rights are under attack.

Unlike the ambulatory surgical center requirement (HB2), this new fetal burial rule was not a law passed by the Texas state legislature. The Texas Department of State Health Services added this rule to its new health guidelines just a few days after the Supreme Court struck down HB2, and finalized these guidelines in late November. The new guidelines apply to both elective and spontaneous abortions (i.e. miscarriages) that occur in hospitals, at abortion clinics, and other health care facilities.

Although the guidelines state that abortion clinics won't incur additional costs, it's expected that patients will have to carry this extra financial burden. "[The regulation] imposes a funeral ritual on women who have a miscarriage management procedure, ectopic pregnancy surgery, or an abortion," the Center for Reproductive Rights states in its lawsuit. "Further, it threatens women’s health and safety by providing no safe harbor for sending tissue to pathology or crime labs."

The lawsuit adds that the fetal burial rule also forces abortion providers to work with an "extremely limited number of third-party vendors for burial or scattering ashes," which would ultimately increase the cost for "women seeking pregnancy-related medical care."

But really, regulations like these are used to shame patients seeking abortion — and abortion providers haven't been shy about calling lawmakers out about it. Amy Hagstrom Miller, the executive director of Whole Woman's Health in Texas, called the regulations a "profound disrespect of women’s health and dignity" in a statement earlier this week.

This isn't the first time a state tried to force fetal funerals and cremations on women having abortions. Both Indiana and Louisiana passed similar legislation this year, but neither state has implemented those measures. In Indiana, current Vice President-elect Mike Pence faced heavy backlash over his endorsement of the fetal burial law, and a judge blocked it from being enforced.

It seems like mandating fetal burial and cremation is the new trend for anti-abortion activists and legislators, who are constantly attempting to block access to abortion without directly challenging Roe v. Wade. Although access to abortion has diminished across the United States over the last five years, these anti-abortion policymakers should pay attention to how judges are ruling on this latest tactic to shame women having abortions. It's evident that these burdensome laws and regulations won't last.