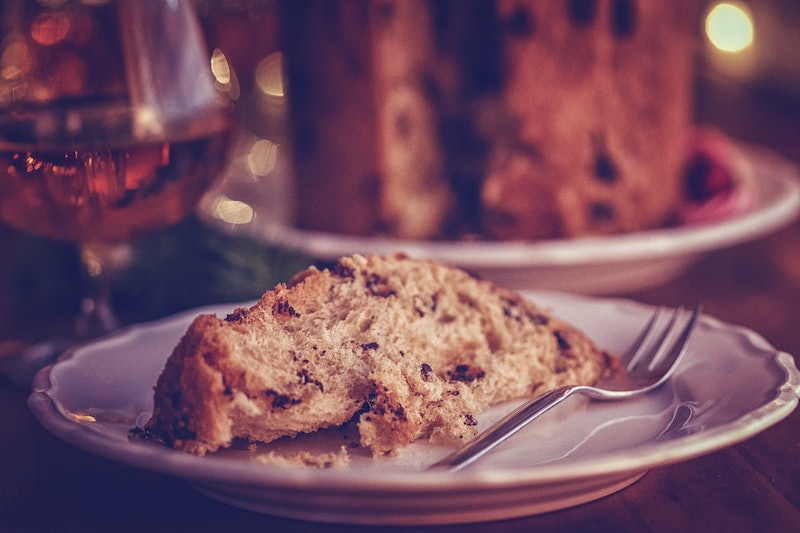 This time of year, the holidays are basically centered around eating — and with all the good food around, it's easy to understand why. Christmas especially is an occasion to feast on delicious food and down festive drinks. While most of the things we consume this time of year are beloved — who doesn't love Christmas cookies and eggnog? — there is one dessert that typically gets a bad rap. Yes, I'm talking about fruit cake. For whatever reason, people just don't like this dense, colorful confection. At the risk of sounding like an out-of-work standup comedian, what's the deal with fruitcake? If people hate it so much, why do we eat fruitcake at Christmas? Not surprisingly, eating fruitcake is a tradition that dates way back.

According to the New York Times, fruitcake dates all the way back to Roman times. Back then, Romans ate a dessert called satura — a mixture of barley mash, dried raisins, pine nuts, pomegranate seeds, and honeyed wine. It was meant to be both sour and sweet, and fun fact: the word "satire" derives from this dessert because of the sour/sweet mixture. Extra fun fact: The Romans are credited with inventing satire as a literary form. So, in a very transitive property sort of way, we would not have The Onion without fruitcake. See? The world needs fruitcake.

Over time, many European countries adopted their own version of satura. Notably, in Victorian England, plum cakes became an integral part in celebrating holidays and weddings, according to The Daily Meal. Back then, "plum" referred not to the fruit, but to dried fruits in general. The American tradition of eating fruitcake at Christmas is believed to have arisen from this tradition, though Smithsonian Mag notes that modern fruitcake dates back even further to the Middle Ages, when bread containing dried fruits became a part of Western European cuisine.

As for why we put fruit in a cake to begin with, it may have started out as a preservation technique. As Village Voice puts it, "Some goon discovered that fruit could be preserved by soaking it in successively greater concentrations of sugar." "Goon" might be a little strong, but once people figured out how to preserve fruit, countries were then able to import fruits from other countries. But this created a problem of its own. "Having so much sugar-laced fruit engendered the need to dispose of it in some way—thus the fruitcake," reports Village Voice. So basically, people preserved fruit by making it even more sugary, and then the only way to eat all this sugary fruit was to mix it into an even more sugary cake. Makes sense.

As someone who's never had the real, dense fruitcake — I've only had its lighter Italian variation, panettone — I don't get where all the hate comes from. And I'm not alone — it seems like nobody really knows when this once-popular dessert fell out of favor. Some speculate that when fruitcake was mass-produced and available by mail order, it became too dry and people avoided it. Some people blame it solely on Johnny Carson's infamous joke that there's only one fruitcake in the world that gets passed from household to household (that's because fruitcakes can be aged). However, there are still plenty of fruitcake lovers out there, and I say we should all give fruitcake a chance — it can't be that bad. Really. It's sugar, fruit, and cake — I fail to see what could possibly go wrong. Furthermore, this dessert has been around for centuries and clearly, it's not going anywhere anytime soon.

More like this
10 Pumpkin Recipes That Are Way More Creative Than Pie & Lattes
By Rebecca Deczynski and Alexis Morillo
14 Last-Minute Halloween Costumes That Only Require A Flannel Shirt
By Kirsten Nunez
64 Genius Gift Ideas For Every Single Guy In Your Life
By Teresa Newsome, Mia Mercado and Brittany Leitner
12 Easy Halloween Costumes You Can Wear With A Denim Jacket
By Kirsten Nunez and Bustle Editors
Get Even More From Bustle — Sign Up For The Newsletter