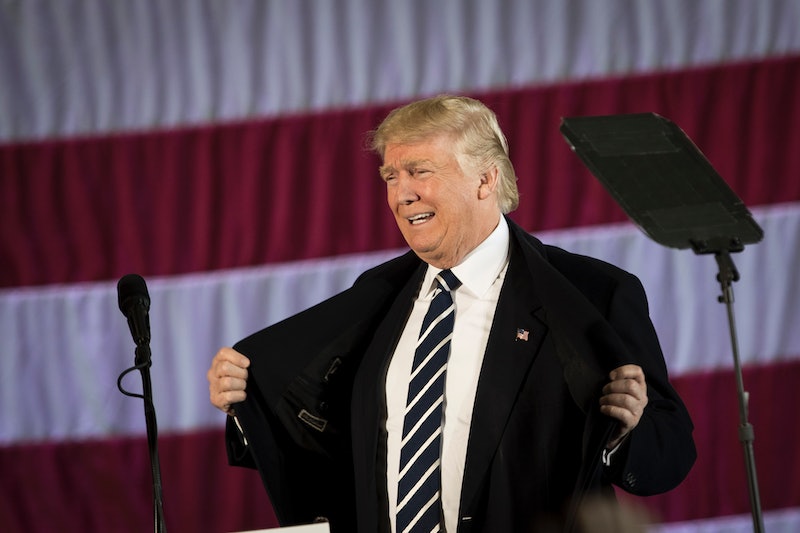 Once again, our president-elect's tweets have gotten him in trouble. Donald Trump sent a Saturday morning missive with a pretty egregious error, and Twitter quickly noticed his mistake. "China steals United States Navy research drone in international waters – rips it out of water and takes it to China in unpresidented act," Trump tweeted before deleting the original tweet and sending a new one with the correct spelling of "unprecedented." But while it's certainly absurd that our president can't spell the word "unprecedented," you shouldn't focus on Trump's spelling errors; rather, you should focus on what the tweet actually says.

Hours after the tweet, #unpresidented was trending as users largely aligned themselves with one of two camps: It doesn't matter what you Hillary Clinton supporters say because Trump still won the presidency, or OMG, our president-elect really can't spell words that appear on middle school spelling tests. But I'd like to propose a third camp, something that I find more problematic than Trump's bad spelling: He's using a social media platform to inflame already tense relations with one of our most powerful allies.

Trump's tweet referenced an underwater drone that was seized by a Chinese naval vessel on Thursday in the South China Sea. The Chinese Defense Ministry says that the vessel discovered the "unidentified equipment" before realizing that the drone belonged to the United States. However, Pentagon officials say that the unmanned drone was clearly marked as U.S. property and demanded China return the drone immediately.

But here's the thing: Despite the he-said-she-said between the two countries, the issue was on its way to being resolved before Trump decided to tweet himself into the situation. "China decided to return [the drone] to the U.S. side in an appropriate manner, and China and the U.S. have all along been in communication about it," China's Defense Ministry said in a statement on its website. Furthermore, the Chinese were already rankled by what they said was an "inappropriate" exaggeration of the debacle, saying that the American response was "not conducive to solving the problem smoothly."

And then Trump steps into the conflict by accusing China of stealing the drone and not providing any context about the situation for his 17.4 million followers on Twitter. He's using Twitter to further incite a tense deal with the Chinese government. And yeah, he misspelled a word in the process, but that's pretty insignificant compared to the dangerous message he's spreading.

That's the problem with Trump. He often does such absurd things — in this case, demonstrating his apparent ignorance of the English language — that it takes the attention away from the bigger issues. Although it's easy to seize on the some of his more obvious gaffes, it's important to focus on larger-scale issues. Trump needs to tread carefully on the world stage, specifically with China, something that President Obama pointed out in his last press conference on Friday.

"Since there’s only one president a time, my advice to him is that, before he starts having a lot of interaction with foreign governments, beyond the usual courtesy calls, he should have his full team in place," Obama at the press conference.

It doesn't seem Trump has taken that advice to heart. Unpresidented, indeed.