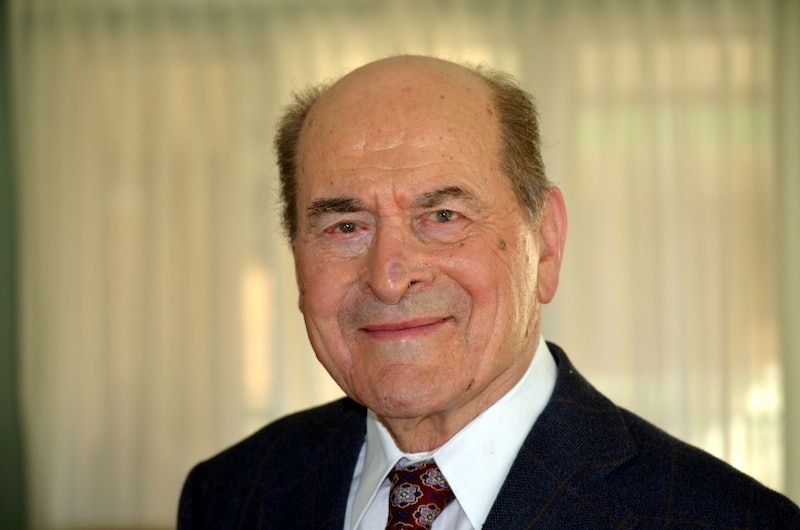 Dr. Henry Heimlich, the inventor of the Heimlich maneuver, died on Saturday in Cincinnati. He was 96 years old. The former surgeon, who created a life-saving technique that would help countless of choking victims, died from complications from a heart attack, his son told NBC News.

Heimlich worked as a thoracic surgeon for nearly seven decades, but he was best known for inventing and popularizing his eponymous Heimlich maneuver, which can be used on people choking on food and other small objects. Heimlich developed the method in 1974, after learning thousands of Americans died each year from choking on food, according to the biography on his official website.

The Heimlich maneuver has become known worldwide. According to The New York Times, it's taught in schools and shown regularly on posters in restaurants. And it's even saved the lives of countless famous people, including actress Elizabeth Taylor and former U.S. President Ronald Reagan.

The maneuver consists of performing abdominal thrusts on the choking victim. The person performing the maneuver wraps the victim in a "bear hug" from behind. The compressions are applied until the force expels the object from the victim's airway. The New York Times reported that Heimlich's famous maneuver has saved an estimated 100,000 lives since the surgeon introduced it in the 1970s.

Heimlich was born in Wilmington, Delaware, in 1920. After receiving his medical degree from Weill Cornell Medicine, he served as a doctor for the the U.S. Naval Group in China during World War II. According to his official biography, Heimlich was the first U.S. surgeon to perform the reversed gastric tube operation, which replaces a damaged esophagus. He successfully completed this surgery in 1957. The New York Times reported that Heimlich also developed a medical aid for chest surgery that was used on soldiers during the Vietnam War.

But Heimlich is best known for the maneuver named after him. He reportedly never performed the maneuver himself until last spring, when a fellow resident at his senior residence in Cincinnati started choking on a hamburger in the dining hall. Heimlich saved the victim's life. "It was very gratifying," Heimlich later told The Guardian. "That moment was very important to me."

As choking on food and small items remains one of the leading cause of accidental death in America, it's clear Heimlich's legacy will live on through his incredible medical invention.