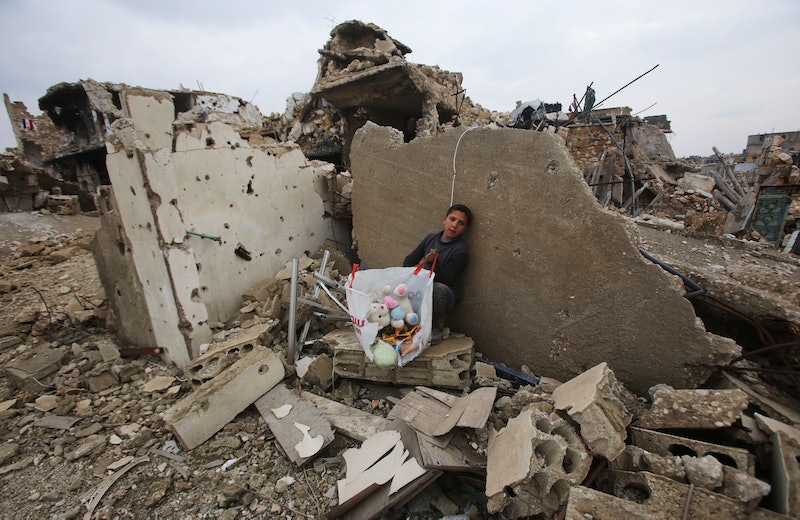 Evacuation efforts broke down once again on Friday with thousands of people left still trapped inside eastern Aleppo as tensions escalated and confusion reigned amid conflicting reports from rebel factions and pro-government troops. Videos posted to social media offer a glimpse into the harrowing ordeal those in Aleppo face and why a new evacuation deal is so important.

Anne Barnard, the Beirut bureau chief of the New York Times, posted a video to Twitter early Saturday morning reportedly showing people who had gathered to be evacuated from rebel-held neighborhoods in eastern Aleppo forced to flee the area amid gunfire. Dozens of people, some carrying small children, can be seen running as gunfire pops off around them. According to Barnard, one man in the vide can be heard saying, "they shot four" while another says, "I don't know what happened." Another video posted to the social media network a few hours earlier by Twitter user @MahmoudRashwani shows a similar scene of chaos.

Evacuations efforts came to a halt Friday as rebel and pro-government forces offered conflicting reports of who was to blame for gunfire, which rebels told the Wall Street Journal killed at least five evacuees. The Syrian government said rebels had opened fire on an evacuation convoy at a checkpoint in Ramousseh and accused them of trying to use the convoy to smuggle heavy weapons. Rebels, however, said it was Iranian forces loyal to Syrian President Bashar al-Assad that had opened fire after stopping and searching evacuees.

The International Committee of the Red Cross (IRC) and the Syrian Arab Red Crescent (SARC) reportedly managed to evacuate roughly 10,000 people before the ceasefire deal broke down Friday and evacuation efforts were halted, the IRC said in a statement released Saturday. They urged the involved parties to come to an agreement that would enable evacuation efforts to resume."People are expecting us to continue the evacuation. It's important that the parties on the ground do their utmost to end this limbo," Marianne Gasser, the head of the ICRC in Syria, said. "We cannot abandon these people."

As tens of thousand of people in Aleppo waited uneasily for evacuation efforts to resume, Reuters reported Saturday that officials from both the Syrian government and rebel forces had said they had finalized a new agreement. Under the new evacuation agreement two Shi'ite villages and two towns near the Syria-Lebanon border would also be evacuated along with rebel-held areas of eastern Aleppo. Five buses traveling to the Shi'ite villages to begin evacuations were lit on fire early Sunday, according to reports from the Syrian Observatory for Human Rights and Syrian state media.

As evacuation efforts began to resume Sunday it was unclear how long a new ceasefire agreement might last.