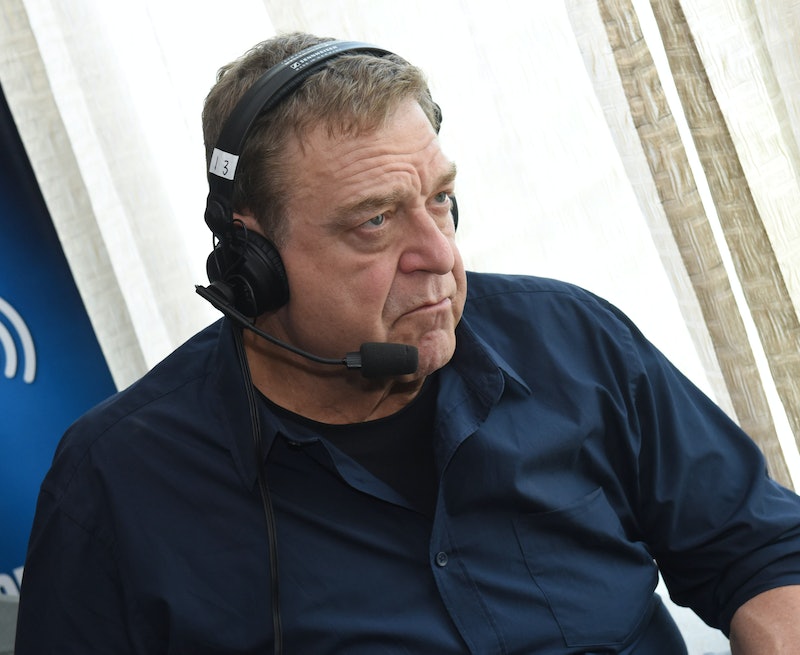 Alec Baldwin's uncanny impression of President-elect Donald Trump returned to Saturday Night Live on Dec. 17 — but it also came back with a special guest. Someone did come down the chimney during the sketch, but it wasn't Santa — it was shirtless Vladimir Putin, who recognized an old friend of his in the president elect's office: John Goodman played Rex Tillerson on SNL , playing Trump's controversial pick for Secretary of State. The actor impersonated the chairman and CEO of ExxonMobile with a Texan accent and a wild enthusiasm for greeting old friend "Pootie" Putin.

In the opening sketch, Trump expresses worries that he might be "Scrooged" and visited by three ghosts like in A Christmas Carol. Instead, he is visited by Putin, who was "just in town, hiding in the walls." The Russian leader then expresses worries about the CIA's report that Russia influenced the election, but Baldwin's Trump shrugs it off. "So, you are saying you trust me more than CIA?" Putin says. "Wow, this guy is blowing my mind." He also tells Trump how excited he is that Trump has been elected president, saying "We think you are the best candidate, the smartest candidate, the Manchurian candidate," referencing the classic 1962 movie. Putin gives Trump an Elf on the Shelf with surveillance, which the Russian leader turns on as he puts it next to their internet router.

When Goodman's Tillerson shows up, he and Putin greet each other with an elaborate secret handshake and chant and immediately break out an oil map to talk drilling and sanctions. Trump is demoted to third wheel in this bromance, but he tries to get their attention anyway. "Then we destroy Vanity Fair, right?" Baldwin's Trump says, but Tillerson and Putin don't care. So he brings up new friend Kanye West. ""He says what he feels," Trump says. "He's like me, but black."

Sadly, that doesn't work either, because Putin and Tillerson say "Live from New York, it's Saturday night" without Trump.

It's never fun to be the third wheel. Watch the sketch in the video below.