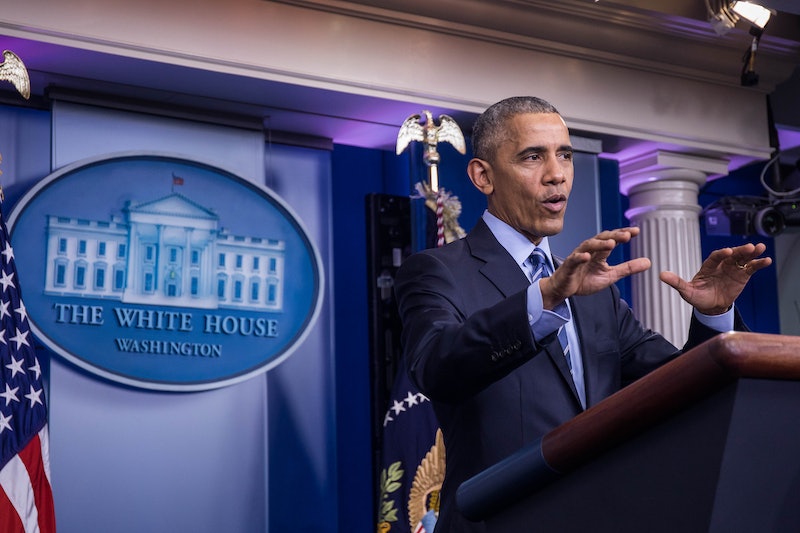 Chance The Rapper has been the highlight of Saturday Night Live's Dec. 17 episode. Not only has the talented musician appeared as the week's musical guest, but he made some memorable — and hilarious — cameos throughout the episode. His best, though, was the SNL song "Last Christmas With Barack," sung with cast member Kenan Thompson. Just like it may sound, the rap is a farewell tune to outgoing President Barack Obama, who is celebrating his final holiday in the White House. "It's been a dope eight years and now it's our last Christmas with Barack Obama," Thompson starts off the song. "So if we're going out, we're going out with a bang."

The musical sketch begins with Thompson and Chance dressed in throwback threads in the winter wonderland that is labeled as Hollis, Queens — a reference to RUN-DMC's classic track "Christmas in Hollis." Thompson and Chance The Rapper show that their holiday has all the fixings, like a turkey and a Christmas tree, but their rhymes state that it may not be for long, since Obama will leave office next year. President-elect Donald Trump will be inaugurated into the presidency in January. "Hey, kids, enjoy the presents while ya can, ’cause next year you might get a bomb from Iran," Thompson raps. Yikes.

Thompson and Chance's song continues to describe this year's celebration, which includes some very green (ahem) stocking stuffers, two men getting married, and invitations to "every immigrant in sight." Jesus even appears to break dance on the dance floor — and Chance expresses surprise that he might be a Democrat. Later, Chance The Rapper details his own supply prep just in case there isn't another Christmas next year and the holiday is replaced with "Regular Winter." "Drinking egg nog like I don't care / I'm going to hurt myself before we lose Obamacare," he sings.

SNL castmember Leslie Jones literally rides in on a sleigh and joins in the fun for a suggestive interlude about current Vice President Joe Biden. "We could share an ice cream under the mistletoe," she sings, before Thompson and Chance introduce a new dance: the Jingle Barack. If you say it fast, it sounds like the title of the song "Jingle Bell Rock," which is pretty genius.

It's a hilarious and fitting farwell to Obama, showing that he will be missed as Commander-in-Chief.

More like this
What Is Barack Obama’s Net Worth? He Makes *Way* More Now As An Ex-President
By Hugh McIntyre
Selena Gomez Joked About Her Relationship Status In Her ‘SNL’ Monologue
By Grace Wehniainen
Pete Davidson Mentioned Kanye West & Ariana Grande In His Last 'SNL' Sketch
By Grace Wehniainen
Pete Davidson & Kate McKinnon Are Part Of A Reported Major SNL Cast Shakeup
By Brad Witter
Get Even More From Bustle — Sign Up For The Newsletter