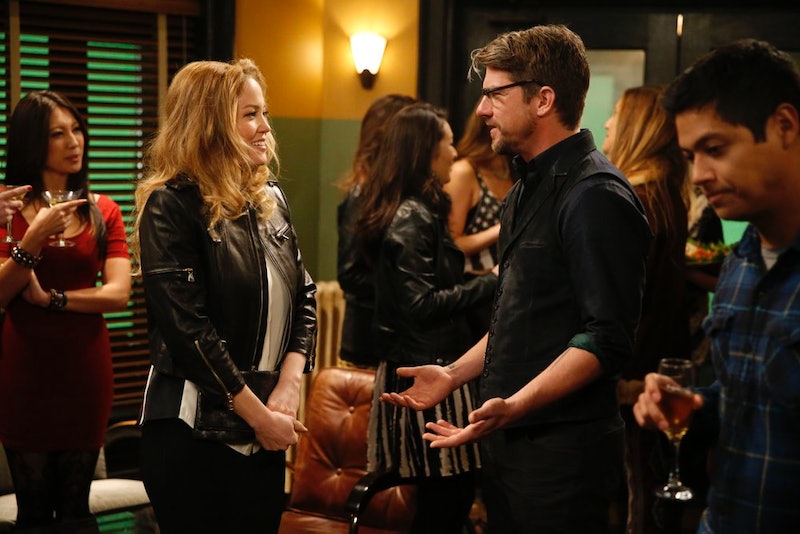 Well, it's about time. That might be a facetious statement, really, because I didn't know until last week how thoroughly we needed what we needed to happen in Parenthood this week to happen. In fact, if you'd asked me in the months preceding this whether I'd rather Julia get back with Joel or go sleep with Dave from Happy Endings, I'd have most definitely chosen the former. But though this episode featured the latter and, well, not the former, I still feel like this episode was the best thing that could have happened to Julia.

Three main things happened with Julia Braverman this week, though they are all fascinatingly interconnected. And they are all beautiful in their own ways, because for once this season, things are no longer just happening to Julia — she's taken charge of her life again in a way she hasn't since she chose to leave her job.

The first of these things was a date with Ed. As she mentions to Kristina, he's really the only adult man who made her feel good during that long stretch of time when she was feeling the crappiest she'd ever felt. And so she needed that date, and to give into that happiness for a minute, and even though she backed out of it when Ed reached for her hand, that doesn't discharge it: She may not be ready to emotionally invest in someone who isn't the man she married, but she is willing to invest in her own sense of self again, and that's something she has to discover separate from Joel.

This goes along rather uncoincidentally with Julia's first real project since she left her job. She signs on to be a key figure in helping get Kristina and Adam's (bonkers) charter school idea off the ground, and something becomes immediately clear: Julia Braverman is her best self when she is allowed to be the Leslie Knope of Berkeley. She may not have the endless cheer and optimism of Amy Poehler's hummingbird of a character, but like most of the Bravermans (Drew excluded), she's at her best when she's allowed to indulge fully in a path that truly excites her — helping Victor feel safe on his first day of school, or haranguing a school board into greenlighting a crazy project. And this episode allowed Julia to do that while simultaneously allowing her to feel like she's gone back to work, something she's been itching for since the second she walked out of that boardroom.

Also it's that infectious energy that leads Julia to the storyline that arose at the end of the episode: It's her commitment, passion, and confidence that unintentionally lures the eye of The Enchanting Mr. Knight (Zachary Knighton), who she caps the episode falling into bed with. We don't know where this particular storyline will go, of course — the promo for next week's episode makes it seem like Mr. Knight's down for a round two, at least; but it also makes it seem like Joel is as well.

This episode of Parenthood showed us a Julia Braverman finally ready to take on the world again, and not bogged down in the grief of losing her marriage. That grief's still there, of course — it was right there in that dinner scene with Ed, when her hand pulled away almost instinctually. But this is Julia at her best. And if this show does commit to a path that ends with Joel and Julia back together (which I suspect it will), it can't just start with Julia begging him to take her back. Julia at her best is who she needs to be — and Joel at his best is who he needs to be — if they're ever going to figure out where they really want to go with their lives next.

You do you, Julia Braverman. You do you.