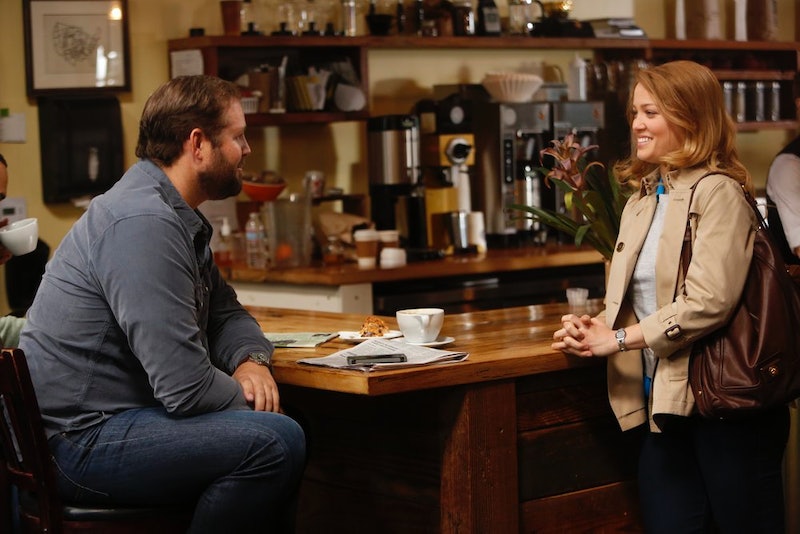 I'm officially calling bullshit on NBC's marketing tactics for Parenthood. Sure, do whatever you gotta do to drive up ratings — I really need another season or two of Bravermans in my life. But that breathless "this has been incredible" planted over the dinner scene between Joel and Pete/Penny to make us think that Joel had fallen head over heels for his boss? Cheap tricks, Parenthood , cheap tricks.

But hey, Julia and Joel had an actual conversation! Sure, it was a real bummer of a conversation, but it needed to happen. Because, as Joel's active firing at Julia proved, there's a lot of deep hurt going on here, especially on his side. Julia's just floundering and trying to get her marriage back; Joel, for his part, feels so thoroughly betrayed at Julia's dissatisfaction with being a stay-at-home mom and taking over his former place in the household — and the way that led down the path to Ed — that it's become clear that he is not ready to even entertain the idea of forgiving her yet.

While we've been granted glimpses, we haven't really gotten to live this story through Joel yet. That might be part of why it's been so hard to really get on his side with this — that and, as the audience, we're conditioned to want the most aspirational and love-filled resolution for our Bravermans. And while this episode didn't really put us with him entirely, Julia's confrontation of him after his (business) dinner with Pete/Penny and his immediate reactions of hostility actually led to an important moment. Because Joel finally said it: In his mind Julia straight-up cheated, and right now all he wants to do is walk away.

This, of course, gets complicated in Braverman land. In fact, I talked earlier today about how Jason Katims' teases re: the Joel/Julia situation point to an eventual reunion.

As of tonight, though, and perhaps even the rest of the season, these two have never been more far apart, and that's saying something considering the mountainous wedge that's been planted between them all season.

Julia ended this episode grabbing drinks at a bar with Ed. We know from the stills for next episode that, come next week, she will also be grabbing dinner with Ed.

And from the promo for next week, it appears...Well, it appears Julia will be full-on sleeping with the Magical Mr. Knight.

Given that the last we saw of Joel in this episode he was proclaiming that in his mind the marriage is over and that dating other people was more likely than reconcilliation, she's not exactly in the wrong here. Especially given how much Mr. Knight is (rather surprisingly) rocking that facial hair.

But still, this is a brave new world for Julia Braverman. May we all make it out of this with our emotions in tact.