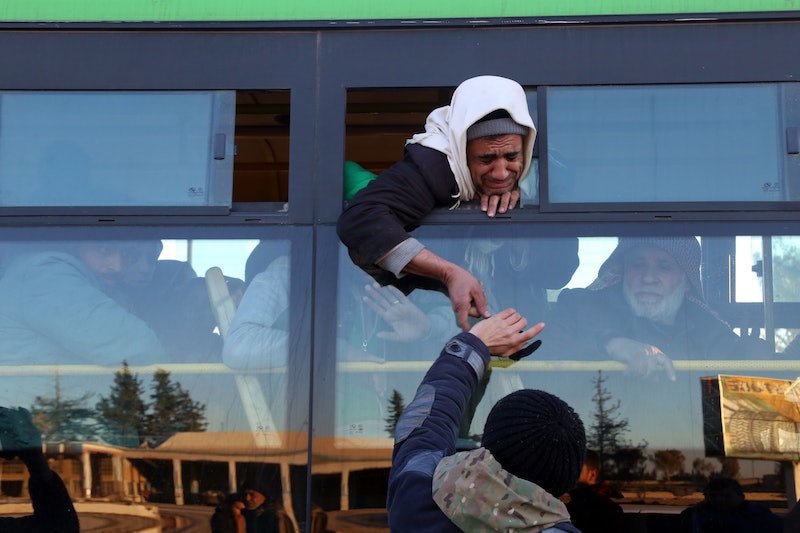 Evacuations were set to resume in the Syrian city of Aleppo on Sunday under a new deal negotiated between rebels and pro-government forces, enabling thousands of people who'd waited in freezing temperatures overnight to leave the besieged city. Yet concerns and questions regarding the fate of those being evacuated from rebel-held areas of eastern Aleppo continue to grow amid reports of inadequate conditions and attacks on evacuation convoys. So, where will people from Aleppo go?

Evacuations efforts came to a halt Dec. 16 as rebel and pro-government forces offered conflicting reports as to who was to blame for gunfire that broke down a ceasefire agreement. Rebels said Saturday an agreement had been reached that would see evacuations in rebel-held areas in eastern Aleppo resume along with the evacuation of two Shi'ite villages and two towns along the Lebanon border.

Documents given to Reuters by rebels reportedly claimed a total of 2,500 citizens would be evacuated from the towns of al-Foua and Kefraya, two Shi'ite villages currently besieged by rebel forces under the new deal. In exchange evacuations in eastern Aleppo would be resumed. Another 1,500 people would then be evacuated from al-Foua and Kefraya in exchange for 1,500 people being evacuated from Madaya and Zabadani, two towns near the Syrian-Lebanese border that have been besieged by pro-government forces.

Reports that buses making their way to al-Foua and Kefraya had been set on fire surfaced Sunday, putting the strength of the new evacuation deal into question. There were conflicting reports of who was to blame for the attack.

Although evacuation efforts were set to resume Sunday, some have questioned whether evacuees from eastern Aleppo are being transported from one war zone to another. The International Rescue Committee (IRC) has said they are concerned the violence of Aleppo will follow evacuees as rebel and pro-government forces continue to clash across the country. Many evacuees are being taken to temporary camps set up in the rebel-held province of Idlib, an area said to be where forces loyal to Syrian President Bashar al-Assad are planning their next advance.

The IRC has also expressed concern that conditions in Idlib are insufficient to properly meet the basic needs of incoming evacuees. "Escaping Aleppo doesn't mean escaping the war," IRC's Syria Crisis Senior Media Officer Paul Donohoe said in a statement. "After witnessing the ferocity of attacks on civilians in Aleppo, we are very concerned that the sieges and barrel bombs will follow the thousands who arrive in Idlib. We already know Idlib isn’t a safe area of Syria."

According to the IRC, some 250 makeshift camps in Idlib already house more than 230,000 people displaced from various areas of the country. To alleviate some of the stain, some 30,000 people were expected to be brought to a camp established near the Syrian-Turkish border, the BBC reported.

The United Nations Security Council is scheduled to vote Sunday on a resolution to ensure U.N. officials have the ability to monitor evacuation efforts, Reuters reported. A draft of the resolution reportedly included an emphasis that "the evacuations of civilians must be voluntary and to final destinations of their choice."

The Syrian Observatory for Human Rights, a U.K. based group monitoring the conflict in Syria, said at least 6,000 people had been evacuated before the ceasefire broke down Friday.