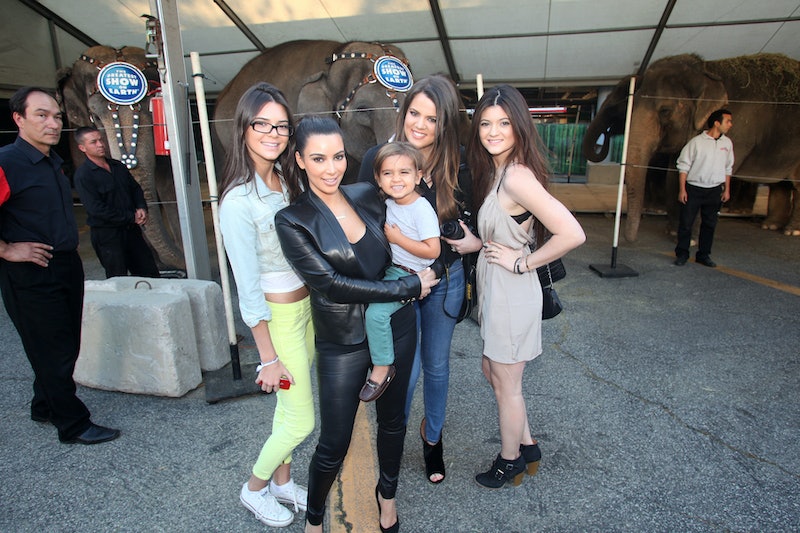 If there's one thing that's consistent in Kim Kardashian's life, it's that she is and always has been super committed to her family. And, that means both immediate and extended members. Case in point, despite having a considerably rough time of it lately due to the Paris robbery and husband Kanye West's mental health struggles, Kardashian made sure to still be present in her nephews' lives by attending their joint birthday party. A source told People that not only did Kardashian attend Mason and Reign Disick's birthday party over the weekend, but that she also reportedly "seemed happy" while there.

To make matters even cuter, the source also claimed to the magazine that North and Saint West were there to celebrate their cousins' birthday as well. The insider also claimed that, no, West was not there with his family, for those of you who were undoubtedly wondering. Perhaps given the hoopla surrounding West's controversial meeting with Donald Trump, it was best to keep this birthday party as low key and drama free as possible.

While Kardashian didn't post any pictures from the party herself, sister Kourtney documented the event. Kim seemed to stay out of the pictures shared publicly, but the Fast and the Furious-themed celebration itself was too cool for Kourt to not show off. And, honestly, once you see the photos, you won't blame her. It was definitely the party to be at.

And though Mason and Reign were absent from pictures like their Aunt Kim, apparently Penelope was not as camera shy.

All in all, it's clear that for now, Kim is content supporting her family from behind-the-scenes, and the fact that she's there for them is all that really matters, anyway.

More like this
Kim Kardashian Joked That Her Wedding To Kris Humphries Was A “Gay Wedding”
By Jake Viswanath
Are The Names Of Kim K & Kanye's Kids Tattooed On Pete Davidson's Neck?
By Bustle Editors
Watch Pete Davidson Joke About The “Really Weird” Kanye West Drama On Stage
By Brad Witter
Kanye Walked Out Of Kim's 'SNL' Monologue Because Of These 2 Words
By Jake Viswanath
Get Even More From Bustle — Sign Up For The Newsletter