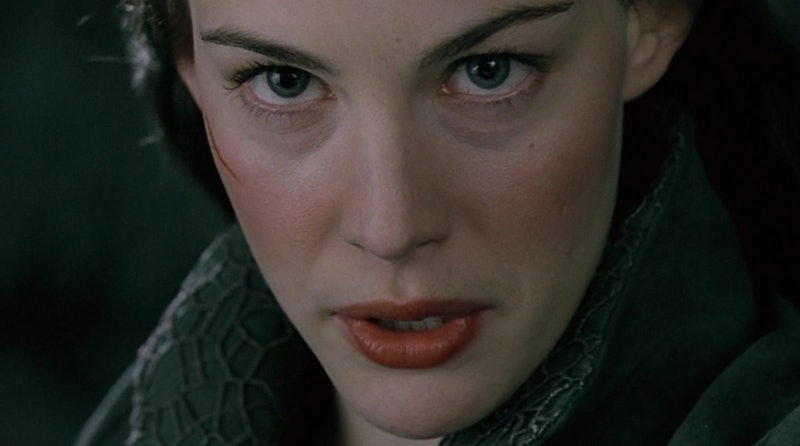 J.R.R. Tolkien's books aren't known for featuring women, but Peter Jackson's film adaptation of The Lord of The Rings put Cate Blanchett's Galadriel and Liv Tyler's Arwen more in the spotlight. Despite them not being in the fellowship, the female characters in The Lord of the Rings: The Fellowship Of The Ring are still incredibly important to the story. With The Fellowship of the Ring turning 15 years old, let's look back on how these women — well, really female elves — matter just as much as the male characters.

When the highly-anticipated first movie of The Lord of the Rings trilogy was released in theaters on Dec. 19, 2001, it began with voiceover narration about the origin of the ring by none other than Blanchett's character Galadriel. This was a decision that Jackson had to make since no such narration exists in the book. Beyond Blanchett being an incredible actor and starting the movie off strong with a commanding tone, the choice to have Galadriel do the narration made sense from a storytelling perspective as her character was alive when the rings were forged. However, in that same vein, fans have argued that Jackson could have had Sir Ian McKellan's Gandalf or Hugo Weaving's Elrond provide the narration. Yet, Jackson chose to feature Galadriel for the opening moments of the film — showing that this female character is massively important to The Lord of the Rings world.

While Galadriel rules Lothlórien with her husband, casual fans would probably be hard-pressed to name his character (it's Celeborn by the way) because when the Fellowship of the Ring gets to Lothlórien later in the film, it's Galadriel's show. (And her scene with Frodo by her mirror isn't unforgettable only because of its heavy use of CGI.) Celeborn does greet the fellowship first, but Galadriel is the one who gets inside their heads — literally — by using her telepathy. This power to hear what's in the other characters' minds, combined with her mirror, makes her able to see the past and future, an ability that no other character is shown to be able to do. She also warns Frodo about Boromir, as she knows he will try to take the ring. Even though this group of four hobbits, an elf, a dwarf, two men, and a Maia (that's Gandalf's race) had all been traveling together with the purpose of destroying the ring, Galadriel was the only one to sense Boromir's betrayal.

Perhaps it's because she emanates wisdom and goodness, but something about her presence makes Frodo trust her immediately. After only meeting her this one time, Frodo is inspired to give Galadriel the ring and she proves just how wise and good she is when she denies it. As the ring has destroyed many a male character, it's particularly telling that even though Galadriel really desired the ring (and thus, that aforementioned CGI moment), this female was able to recognize that she would turn to darkness if she took possession of it.

Galadriel also recognizes the importance of Frodo's mission and gives the group hope, safety, and encouragement after the presumed death of Gandalf. She confirms that Frodo must fulfill his role as ring-bearer alone and utters this very quote-worthy line to Frodo, "Even the smallest person can change the course of the future." I mean, even Gimli is enamored with Galadriel and he hates elves! However, just because Gimli finds her to be lovely doesn't mean that she isn't also feared and respected. This female is a fierce leader and all the members of the Fellowship of the Ring were clearly — and understandably — affected by her presence.

Although the fellowship's time with Galadriel is short, she provided a haven for the group and before she sent them on their way, she gave them each a gift. While most of her gifts were practical (the light of Eärendil come in handy for Frodo later), these presents indicate that Galadriel has an impact on the main characters far beyond this one meeting. It's impossible to deny how important Galadriel is — not only to the story — but to the characters too.

Arwen is a bit trickier to discuss since her main character arc is her romance with Aragorn and thus, you could argue that her purpose is to give a love story to one of the main male characters in a very stereotypical female role. Yet, just because she added a romantic dynamic that otherwise would have been completely missing in the fantasy action-adventure film, she's also a strong character based on her own actions — even if the first time she appears to Frodo is a bit too romanticized for my taste. (Why is she is wearing a completely different outfit in Frodo's vision than she is in real life?? Something tells me that Jackson wouldn't have done the same for a male character. I guess we can blame that on her elven magic.)

Anyway, the reason Arwen meets up with Aragorn and the four hobbits is justified since she epically saves Frodo from the Ringwraiths. Frodo was dying after being stabbed with a Morgul-blade and so he needed elvish medicine. Thankfully, Arwen had been tracking them and decided she would be the one to take Frodo to her father Elrond in Rivendell since she is the faster rider. Yeah, you read that right — she's a faster rider than the skilled Aragorn and she confidently knows it. She also knows the elves will be able to protect Frodo if she's with him when they cross the river so she calms Aragorn down by stating that she does not fear the Ringwraiths. While at the river, she casts a powerful spell that causes the river to flood and stops the Ringwraiths — further proving that she's a badass elf with equally badass powers.

She then successfully gets Frodo to Riverdell where he is healed and thus, can be part of the Fellowship of the Ring. Later, she shows she is wise and encouraging (hey! just like Galadriel) by telling Aragorn that just because he is Isildur's heir doesn't mean that he will make the same mistake as his ancestor and that he will defeat evil when his chance to do so comes. Wow, these female elves really are some visionaries. I guess it makes sense since Galadriel is Arwen's grandmother after all.

Even when Arwen and Aragorn are getting romantic, Arwen is still a pretty empowering character. When she tells Aragorn that she chooses a mortal life with him over an immortal life without him, she gives him her necklace. He tells her that she can't give it to him, to which she replies, "It is mine to give to whom I will — like my heart." While choosing a man over an eternal life doesn't necessarily sound empowering, the point is that it's her choice to decide what makes her happy. And being with Aragorn for a limited time would make her happier than living without him forever.

With only 26 minutes of screen time between the two of them — and that's in the extended version! — Blanchett and Tyler are far from the main characters of The Fellowship of the Ring. Yet, both women come into the film during an integral part and save the day. If you're familiar with The Lord of the Rings books, then you know Jackson chose to increase their roles in the film by strengthening Galadriel's powers and giving Arwen a much larger part — and as a female fan, I commend Jackson for that decision.

While I can't say in good conscience that Arwen and Galadriel are bigger players than Frodo, Aragorn, Sam, or Gandalf, I can argue that they have more meaningful parts than some other male members of the fellowship — like Legolas and Gimli. Even though there aren't many women who even appear in The Lord of the Rings: The Fellowship of the Ring, 15 years later, I'm still proud that Arwen and Galadrial are the representatives of the female sex.