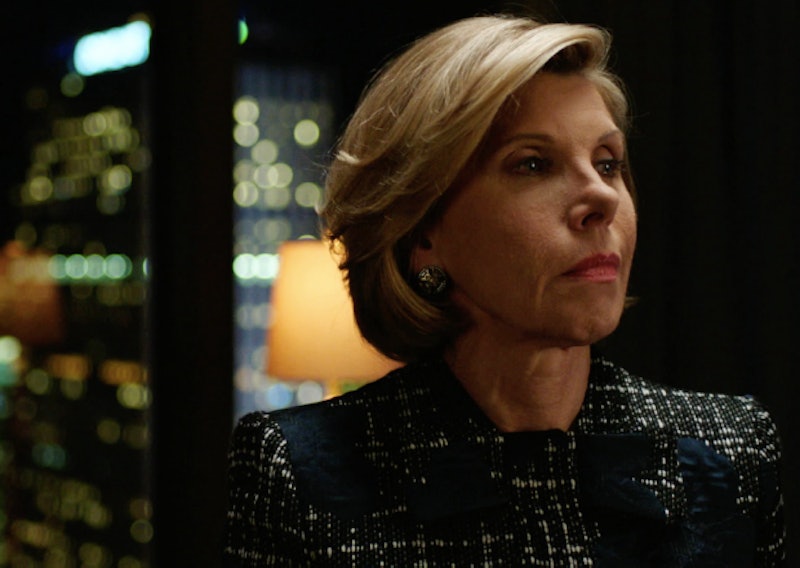 It was a big bummer when the drama of The Good Wife came to an end in May, but when news of a spinoff series came to be, the sadness slowly melted away. And with the release of the first trailer for The Good Fight on Sunday, Dec. 18, fans grew increasingly excited. The CBS All Access series looks to be a drama-heavy romp, with Christine Barankski reprising her role as the cunning lawyer, Diane Lockhart, and Game of Thrones' Leslie Rose playing a young lawyer, Maia Rindell, who gets involved in a financial scam that nearly ruins her reputation while also nearly bankrupting Diane, her godmother. After the women are kicked out of Lockhart & Lee, they join up with Lucca Quinn (Cush Jumbo) at a fancy law firm in Chicago.

And not unlike The Good Wife, it seems like The Good Fight is going to be chock full of intense drama with Diane leadin the charge. The trailer shows everything from a passionate relationship with Leslie's character to fiery board meetings to some very sinister-sounding dialogue from Diane. Whatever happens to the character in this new series, it seems that the iconic lawyer is not about to go down with a major fight.

In the trailer, Diane advises her goddaughter, "you wait, and listen, and watch. Eventually everyone reveals themselves." But what exactly needs to be revealed? It seems like Maia will be dealing with some issues with colleagues at the firm and Diane is suggesting that she go for these colleague's weaknesses. Maybe someone's got some dirt on young Maia and Diane wants her mentee to stay quiet until the two find dirt on the offender. No matter what the case, it seems like Diane is up to some cutthroat tactics in The Good Fight. If she weren't, the show's tagline, "Things Will Get Nasty," wouldn't be necessary.

The series, which also stars Delroy Lindo, Sarah Steele, Justin Bartha, Erica Tazel, Paul Guilfoyle and Bernadette Peters, will premiere in February. It is created by Robert and Michelle King, who were also behind The Good Wife, so it stands to reason that all the drama, passion, and illicit behavior we loved from the original series will be present and accounted for.

Start practicing your spit takes now, because this new series seems like it will provide the same kind of shocking, drama-heavy entertainment as The Good Wife.