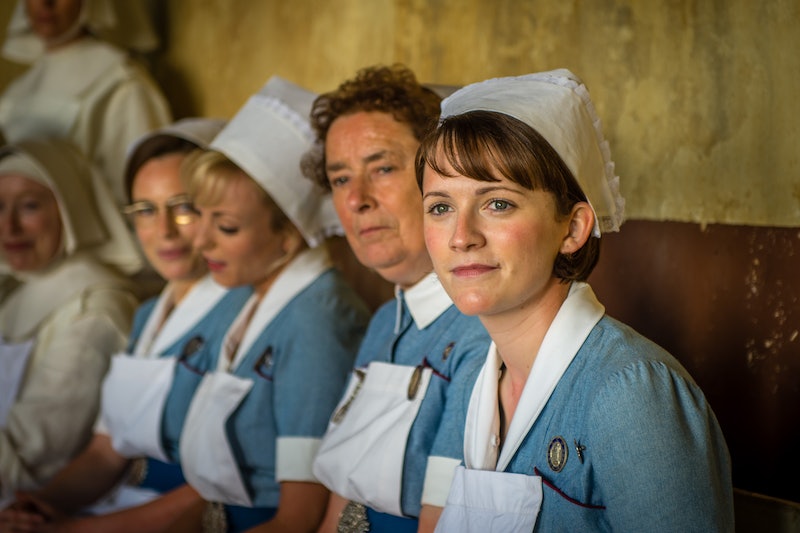 But before we even start celebrating a new season of Call the Midwife , we've got its annual holiday special to look forward to on Sunday, Dec. 25 at 7:30 p.m. ET on PBS. For this episode, Nonnatus House is heading to South Africa to help save Hope Clinic, a mission hospital that the order supports, from closure. The holiday special will also explore the issues of apartheid and economic inequality in the African nation, according to The Telegraph 's preview of the episode. But from the trailer, it looks like this holiday special, which was filmed on location near Cape Town, South Africa, is going to be even more heartbreaking, heartwarming, and full of yuletide miracles than the ones that have come before it. Not going to lie, I'm already getting a little choked up just thinking about it.

The BBC has also confirmed that those aforementioned regular cast members will be returning for Season 6, as well as Sister Monica Joan (Judy Parfitt), Sister Mary Cynthia (Bryony Hannah), Patsy (Emerald Fennell), Delia (Kate Lamb), and Sergeant Noakes (Ben Caplan). Neal Street Productions, the production company behind Call the Midwife, announced that Miranda Hart, who we last saw play Camilla "Chummy" Noakes in Season 4 of the show, would be returning for the holiday special and Season 6, The Guardian reported in April. Unfortunately, Hart revealed on Twitter in August that she was not able to film for Season 6 due to scheduling conflicts. And I was so hoping that Chummy would return "an enlightened, crazed 60s hippy, having an affair with Paul McCartney" as Hart previously joked about her hopeful return, according to The Guardian.

But Hart did get us excited for the new addition to Call the Midwife this season in the form of new cast member Dame Harriet Walter. You've definitely seen the legendary British actress on screen before, but American audiences might recognize her best from recent roles as Clementine Churchill in The Crown, Dr. Kalonia in Star Wars: The Force Awakens, and Lady Shackleton in Downton Abbey. In Call the Midwife, Walter will be playing Sister Ursula, who arrives at Nonnatus House following the passing of Sister Evangelina (Pam Ferris) in the Season 5 finale and is "not [a] very welcome addition" to the team of midwives, the actress described to RadioTimes in July.

When Call the Midwife returns for Season 6, we'll find ourselves in the year 1962, and we can expect the Nonnatus House inhabitants, as well as the people they serve in Poplar in the East End of London, to experience and deal with the changing world around them. "As the team settle back into Poplar after their South African adventure, we‘ll see them grappling with all the contradictions and opportunities of the early Sixties - the beacon of the pill, the shadow of the Kray twins, the lure of independence and the call to duty," series creator, writer, and executive producer Heidi Thomas described Season 6 of Call the Midwife in a statement. "And time and time again, in a age of change and danger, we will be reminded of the simple power of love.” The way that Call the Midwife incorporates historical events into its narrative, as it did with the introduction of the birth control pill and the thalidomide crisis last season, is one of the best parts about the series, in my opinion, so I can't wait to see more of it.

Season 6 of Call the Midwife will feature its usual eight episodes, according to the BBC, but that never seems like quite enough for me. Thankfully, we already know that there's going to be more Call the Midwife on the way, and A LOT more of it, to boot. The BBC announced in November that it has already commissioned Seasons 7, 8, and 9 of Call the Midwife, which will follow the midwives and nuns into the mid-1960s. Since the characters are now just at the start of one of the most revolutionary decades ever, I have a feeling that the series is only going to get more intriguing, provocative, and exceptional from here.

More like this
Netflix Just Revealed When 'Never Have I Ever' Seasons 3 Will Premiere
By Gretchen Smail and Alyssa Lapid
'Games of Thrones' Fans May Recognise This 'Conversations With Friends' Location
By El Hunt
Betty Gore’s Daughter Honored Her After She Became A Mother Herself
By Brad Witter
50 Years After Creating Her Alter Ego, Angelyne Is Still Driving That Pink Convertible
By Gretchen Smail
Get Even More From Bustle — Sign Up For The Newsletter