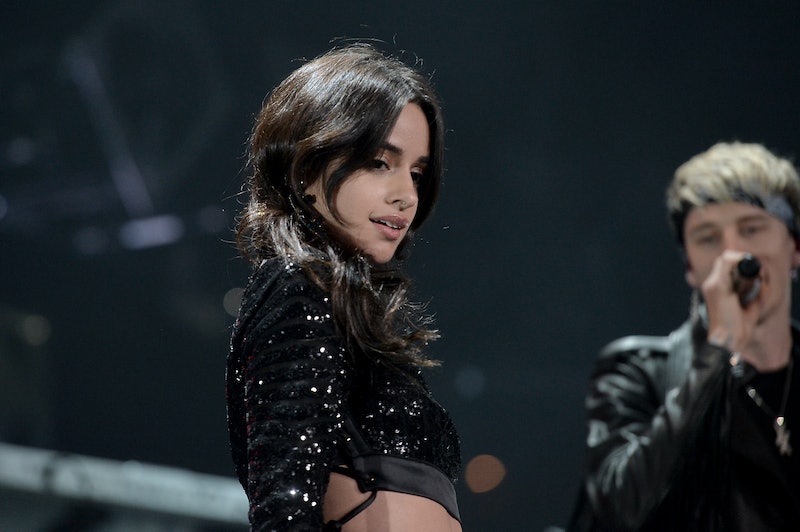 According to a note written by her fellow bandmates, Camila Cabello has left Fifth Harmony after several years with the group. In the note, her fellow bandmates gave her their best wishes and indicated they looked forward to continuing to make music together as a group. Update: On Monday afternoon, Cabello released a statement, saying that she is indeed going solo, but that contrary to what they said in the tweet, her former bandmates were aware of her intentions to leave.

Earlier: The announcement about Cabello's departure was posted at midnight on Fifth Harmony's official Twitter and Facebook accounts. The note opened with the following statement: "After 4 and a half years of being together, we have been informed via her representatives that Camila has decided to leave Fifth Harmony. We wish her well." It went on to thank fans for their support of Fifth Harmony and confirm a continued commitment to the band by its remaining four members — Dinah, Ally, Normani, and Lauren.

Cabello's departure comes as somewhat of a surprise given the group's recent performance together at the iHeartRadio Jingle Ball Tour, as well as because of their indication that they were planning an upcoming third album for 2017. However, in addition to the group's collective successes, Cabello has also recently had solo successes of her own, releasing a duet with Shawn Mendes in 2015, as well as being featured on a song entitled "Bad Things" by Machine Gun Kelly this year. Indeed, Billboard indicates that these successful collaborations perhaps point at Cabello's desire to further pursue more solo music work, and could be an impetus behind her decision to leave Fifth Harmony. However, it should be noted that Cabello has not yet offered any comments on the reasons behind her departure.

Regardless of the reasons behind the decision, Fifth Harmony fans have spread the news of Cabello's departure like wildfire. According to Forbes, in the 20 minutes after the band's note about Cabello's departure was released on Twitter, the tweet was retweeted almost 11,000 times and had garnered almost 17,000 likes, numbers which are surely continually growing. The teen celebrity news website Just Jared Jr. reports that fan reactions to the tweet range from "sad to angry to just plain shock," and that some fans are comparing Cabello's exit from Fifth Harmony to Zayn Malik's controversial exit from the band One Direction.

Overall, it is clear that Cabello's departure has certainly strongly resonated with Fifth Harmony fans, who are likely waiting to see what next steps will look like for everyone. Hopefully Cabello and her former bandmates will move forward with strong and successful careers and continue to provide fans with the music they so admire.

More like this
Who Is Camila Cabello Dating? She's Getting Cozy With Lox Club CEO Austin Kevitch
By Radhika Menon
Shakira Joked About An Early 2000s Video Of Her First Camera Phone Encounter
By Stephanie Topacio Long
Twitter Is At Odds Over Taylor Swift’s Possible ‘All Too Well’ Oscar Run
By Brad Witter
Megan The Stallion’s “Anxiety” Song Shouts Out Britney Spears & Whitney Houston
By Grace Wehniainen
Get Even More From Bustle — Sign Up For The Newsletter