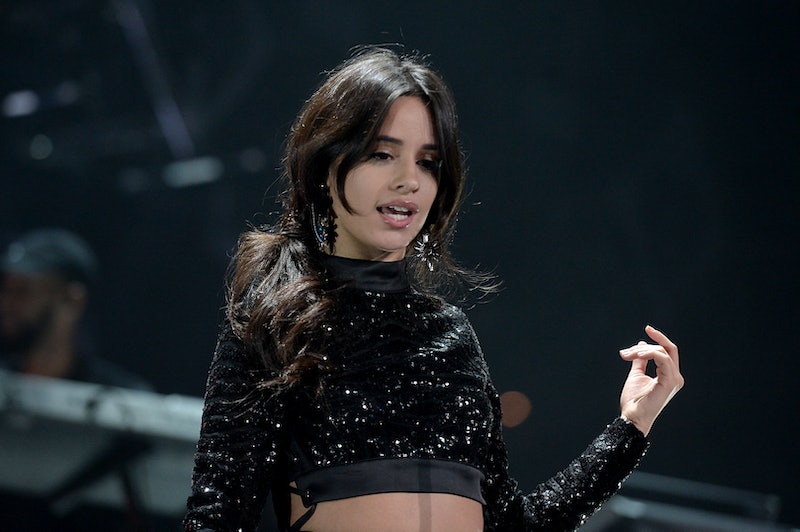 There was never going to be anything she could say that would fully make me understand, but Camila Cabello's statement on leaving Fifth Harmony is finally here. Phew. That's the good news. The bad news is, it brings up more questions than answers, and I'm no closer to getting resolution on this heartbreaking split. The girl group announced Cabello's shocking departure at midnight on Sunday, with an extensive tweet that blindsided fans — even as it reassured them that the group would continue. That tweet couldn't explain why Cabello had made the choice she did. All they could tell fans was that she was gone, and we didn't have word one from Camila Cabello about it.

So, even though I'm still reeling from the first announcement, I was really relieved to get some info from Camila Cabello herself. She honestly could have said anything at all, even, "You guys are poopy dumb-heads, and I can't do this anymore," and it would have made me feel better; it was her silence that was confusing me the most. But I am also really appreciative that she doesn't think I'm a poopy dumb-head, and that she provided some context for her Fifth Direction exit, no matter how vague it is, and how much it conflicts with the statement that Fifth Harmony released. I've included it below, so take a gander and see if it helps you understand what's going on.

The main thing that sticks out to me from this Instagrammed statement is Cabello's claim that her bandmates were more than aware of the way she was feeling about the group. On top of that, she says that she'd wanted to stick it out and that she "did not intend to end things with Fifth Harmony this way." This contradicts the band's statement, and both things can't be true, so now I have no idea what to believe. Bustle has reached out to Fifth Harmony for comment, but have yet to receive a response.

At the end of the day, I'm really doing my best not to question Cabello's reasons for leaving, because it's important to remember that she doesn't owe any of us anything. The more information I have, the closer I'm able to get to that goal. Nothing could make me any less sad about this, but hearing Cabello's words reassures me that she's doing what's best for herself. That's all a true fan could ever want.