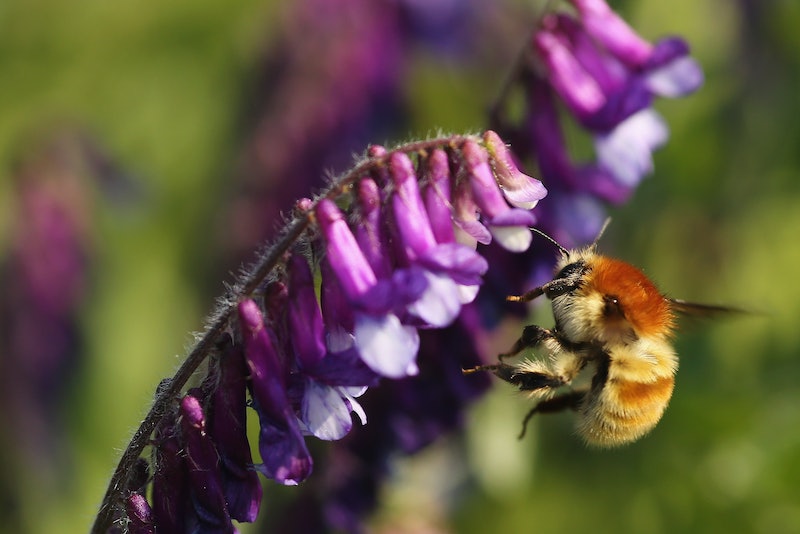 Once upon a time, a man named Michael Smith, a Cornell University graduate student who studies the evolution and behavior of honeybees, discovered there was barely any research on bee stings and pain. "Where is the most painful place to be stung?" he wondered, but could find no data. So he decided to fix this gap — by subjecting himself to bee stings all over his body. Yup, all over his body, including his genitals. Now he's published a study in the journal PeerJ summing up the experiment and the results.

Here's how he set up the experiment: For 38 days, between 9 and 10 a.m. each day, Smith would sting himself five times. Each day he stung himself, he would make sure to start and end with a sting on his forearm so he could accurately gauge the pain measurements for the other three stings. Throughout the 38 days, he made sure to sting himself in 25 different body parts, three times each. That's 190 bee stings, by our count. Ouch.

Smith measured his pain on a scale of 1 through 10 — 1 for the lowest amount of pain, 10 for the highest amount of pain. What was the most painful place to be stung in? Color us surprised: Out of the 25 different body parts, which included the penis, the testicles, and the butt, Smith concluded that the nose was the most painful place for a bee sting, ranking it as 9 out of 10 on pain levels.

You can take a look at Smith's "pain map" below to get a sense for his other pain measurements.

We're still curious — how exactly did he go about administering the bee stings? Well, according to the study, he would pick up the honeybees by their wings with forceps and then apply them to the place he was testing for pain for one full minute.

While Smith's experiment certainly fills a gap in the science of honeybees, he himself points out that the data is incredibly subjective, and that other people might feel pain more sharply in different places. So would there be successive studies on other test subjects? "I didn’t see a lot of merit in repeating this with more subjects," he told National Geographic.