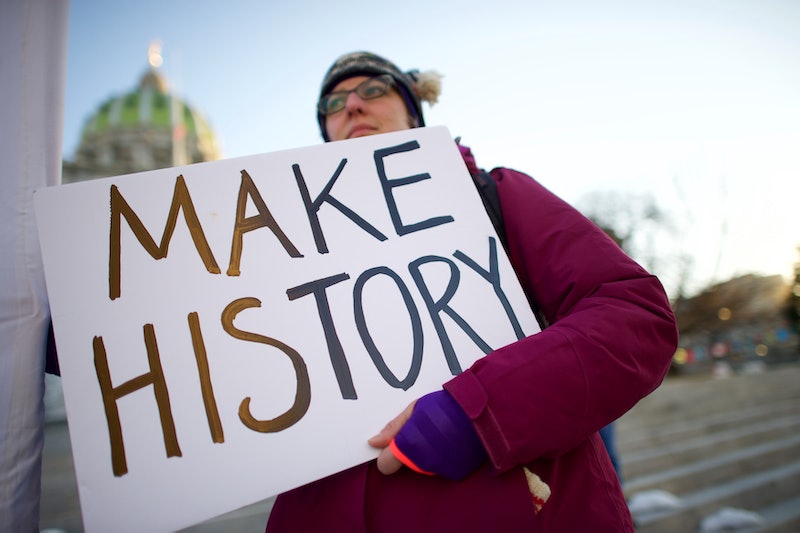 It comes as no surprise that public outcry against this very old and outdated institution only happens in situations like those of 2000 and 2016 — it is solely a function of presidential elections, and is therefore not thought about much before or after. But the system that was established as a safeguard against demagogues like Donald Trump now functions as an extension of our failing two-party system.

Monday might have given the Oval Office to Trump despite Hillary Clinton having won the popular vote, but there are ways to protest this failed institution long after this fateful day. Below are some tips on what you can do to protest the Electoral College in meaningful ways after its 2016 decision is finalized.

One of the positive side-effects of public inquiry into the Electoral College is the number of articles penned about its unsavory history. Although learning that the institution that formally elects our presidents was established to protect slave-holding states is uncomfortable, it's important when gearing up to protest its modern relevance.

Research Means Of Reform (Or Abolition)

Before taking a stance on any form of advocacy, it's critically important to have a theoretical solution. There are currently two main schools of thought regarding a change to the Electoral College — reforming it to reflect the popular vote or abolishing it completely via constitutional amendment. Whichever you decide, it's important to read up on the way your chosen option would function.

Enter the National Popular Vote Interstate Compact, a 10-year-old campaign that lobbies states to pass laws requiring them to award their Electoral College votes to whoever wins the popular vote. The Electoral College would still exist, but if more states join the compact, they will in effect tie their state's votes to the winner of the popular vote. Ten states and the District of Columbia have joined the NPVIC, resulting in a combined 165 electoral votes. The NPVIC would need another 105 votes to be fully established.

On the NPVIC website, you can find information about how to lobby your legislators and donate to the organization.

Lobby Your Congresspeople To Support A Constitutional Amendment

If you believe the Electoral College must be abolished wholesale, then a constitutional amendment to completely abolish the institution is in order. This would be a much longer and difficult process, as it would involve a majority in both houses of Congress to pass, and would take a much larger and more significant lobbying push to do so. That said, it would also be a much more permanent and less complicated solution in the long run than establishing the NPVIC.

One prudent means of lobbying congresspeople to support an amendment is to do so during their push for election or re-election in the 2018 midterms. If enough congresspeople or candidates know that our votes are contingent upon their support of a constitutional amendment, more of them would be likely to actually follow through once they're in office.

Following the election of Trump, a former Congressional staffer offered tips on the best ways to contact your representatives and senators. Hint: social media is not that useful.

The drama leading up to the 2016 Electoral College vote will surely go down in history, especially given that this election is the second time in this very short century that an American president has lost the popular vote and won the election. This pressing political issue, like so many others, shouldn't be revived every four years, but should be a matter of focus for activists in off years who want to avoid another situation like this.