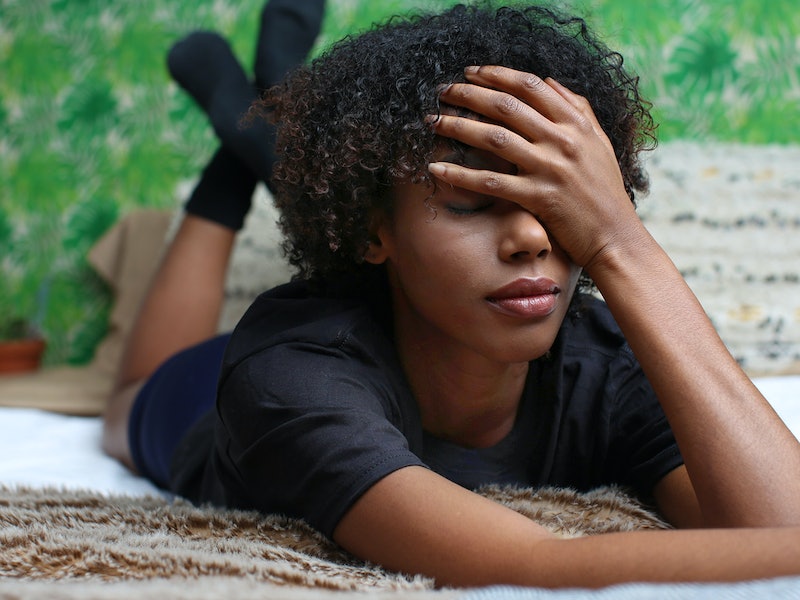 You may think that you know everything there is to know about depression, but odds are high that you don't — because even if you are fully educated about factors like genetic predisposition and medications, you probably don't know about the illness's surprising side effects, many of which impact our bodies rather than our minds. In fact, as Science Daily put it in March, we shouldn't just regard depression as a mental disorder because it "affects the whole organism." Frustrating as this fact is for sufferers, it's good to know — not only because it can help you take charge of your health, but because it supplies further proof that depression is not "just all in your head."

Unsurprisingly, many illnesses can lead sufferers to develop depression, because experiencing chronic pain and isolation (as well as some specific symptoms) often trigger mood disorders; sleep apnea, for instance, is likely to cause depression. But research has revealed that depression can lead sufferers to develop some separate health problems — though it is unclear whether depression appears to be the cause itself, or where the two disorders coexist with some kind of common feature or cause, like a faulty gene or oxidative stress. The important thing to remember about all of this is that depression is a real illness, not some feeling that you can "get over" — and it deserves real medical attention.

It's been revealed in a study published this week that depressed patients respond less to chemotherapy than non-depressed ones. And the reason why has been tracked to a specific protein in the blood, which occurs in seriously depressed cancer patients and seems linked to lower response rates.

The study, which only involved 186 patients and will therefore need a bit more work before it's confirmed as a wider phenomenon, found that newly diagnosed cancer patients with severe depression had lower levels of brain-derived neurotophic factor (BDNF) in their blood, and that made them less responsive to chemo and more prone to developing side effects. BDNF is one of the most important factors in the brain's plasticity and regeneration, and lower levels of it have been linked to depression before (along with Alzheimer's and schizophrenia). But this is the first decided link between "depression and poor outcomes," as the researchers put it, in people receiving chemo.

A November 2016 study conducted in Switzerland found that you might not be imagining it: depressive episodes may indeed be followed by higher incidences of tummy issues. This study was particularly focused on young people, with 6,483 teens surveyed for their health and mood. And the results were fascinating: if you had episodes of depression, they were more likely to be followed by episodes of stomach disorders and arthritis than if your mood was fine. (The study also found that anxiety has the same corresponding relationship with skin disorders, and epilepsy with eating disorders.) It's yet another indication that depression messes us up on more than just a neural level.

Cancer is, unsurprisingly, often depressing for the patient. But a 2012 study found that depression could in fact make the survival rate of particular cancer patients much worse: a combination of depression and certain biological indicators of aging, according to the study, meant that bladder cancer patients increased the risk of death threefold. The biological indicators themselves are called telomeres, which get shorter as the body ages and can be further shortened by lifestyle factors like smoking, obesity or bad diet.

But even without shortened telomeres in the equation, the researchers found that depression on its own increased the mortality rate of bladder cancer patients: those with depression had a median survival rate of nearly 5 years, while those without lived for a median of 16 and a half.

Depression isn't just bad for the heart on a metaphorical level; on a genetic level, at least, scientists have discovered that depression and heart troubles are closely interrelated. A study out of Adelaide, Australia in September discovered that one gene's expression in the brain and body seems to be highly associated with depression, and that the gene in question is actually typically related to cardiovascular and metabolic disorders, as well. There are a variety of gene expressions that we think might have something to do with depression, but this is a first; the gene in question is called PXMP2, and is related to the body's treatment of fatty acids (it's found in great quantities in mammary glands, for example). This points to what the researchers called "shared pathways between cardiovascular disorders and depression," though they've said there's more work to do to figure out how mood disorders and other conditions interrelate on a genetic level.

Depression Can Increase Likelihood Of Developing A Number Of Diseases

This is one of the bigger-picture studies: a review of 29 studies of depression and its affects on the body was released in September. It found that there's something significant about how depression works that we haven't yet really accounted for — it turns out that, according to the weight of evidence, depression increases what's called the body's oxidative stress. Oxidative stress is basically what you fight against when you're taking in antioxidants in your food; it's the “state in which oxidation exceeds the antioxidant systems in the body secondary to a loss of the balance between them," or when there are too many oxygen free radicals in the system. It's associated with everything from diabetes to cardiovascular diseases, so no wonder depressives suffer higher rates of illness if their bodies are under significant pressure.

This may actually be the study that brings all the other ones together: yep, depression is hurting your health, but the good news is that treatment for it can reduce the oxidative stress (which is what this study found) and the likelihood of knock-on diseases. So if you're struggling with depression — get yourself to a therapist or GP stat.

More like this
How To Fight For Reproductive Rights, Based On How Much Time You Have
By Courtney Young
Michigan’s Governor Is “Going To Fight Like Hell” To Protect Abortion Access
By Andrea Zelinski
I'm Going Off My Bipolar Meds to Try to Get Pregnant
By Anonymous, as told to Anna Goldfarb
Camila Cabello Shared Advice For Anxiety & Mental Health With Selena Gomez
By Alyssa Lapid
Get Even More From Bustle — Sign Up For The Newsletter