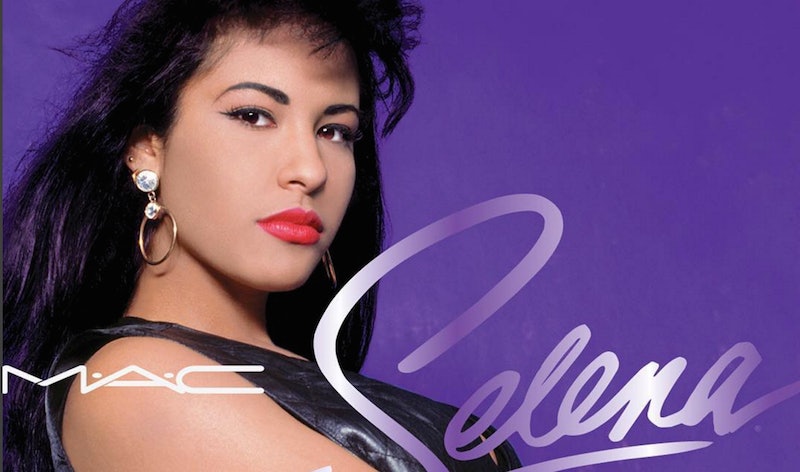 Here's yet another beauty release to look forward this holiday season — a restock of one of MAC's most popular capsule collections! So, when will Selena x MAC be restocked online? Well, it's actually sooner than you might think — back in October, MAC promised that they'd re-release the astronomically popular makeup line in January, but it turns out they're moving up their timeline by a few days at least, since the collection will officially be back on shelves in stores and online on Dec. 28 and 29.

It'll hit MAC's US and Canada online stores promptly at 12:01 a.m. EST on the 28th, so be sure to mark your calendars/set up plenty of reminder alarms on your phone — the first collection sold out ridiculously quickly, so you're going to want to have your credit card at the ready. Following the online release, it'll be available in stores starting on Dec. 29 — in MAC brick-and-mortar locations, as well as MAC retailers including Belk, Bloomingdale's, Dillard's, Hudson's Bay Company, Macy's, Nordstrom, and Saks Fifth Avenue. Suffice it to say, whether you're purchasing online or in person, you've certainly got lots of options.

Of course, there are some guidelines, mainly to safeguard against all the eBay re-selling that tends to run rampant over limited edition collections like Selena x MAC — online, you'll only be able to buy two of each product, and in stores, you'll be limited to three of each product.

Still, that's plenty — one for you, and one for a friend or two. Plus, since the collection is returning in its entirety (with the sole exclusion of Liquid Liner in Boot Black), you'll have lots of great items to choose from. And besides, the restrictions don't stop you from buying one (or two, or three) each of the entire collection, if that's what you choose. (Let's all pause for a second and consider the glory that would be owning the entire Selena x MAC collection twice over).

The restock comes a few days after Christmas, but given the fact that it was originally slated to happen in January, I think it's safe to say that Christmas came early this year. It's the perfect time to go out and spend your holiday bonus/cash from your generous relatives — and what better way to spend it than on Selena-inspired makeup?