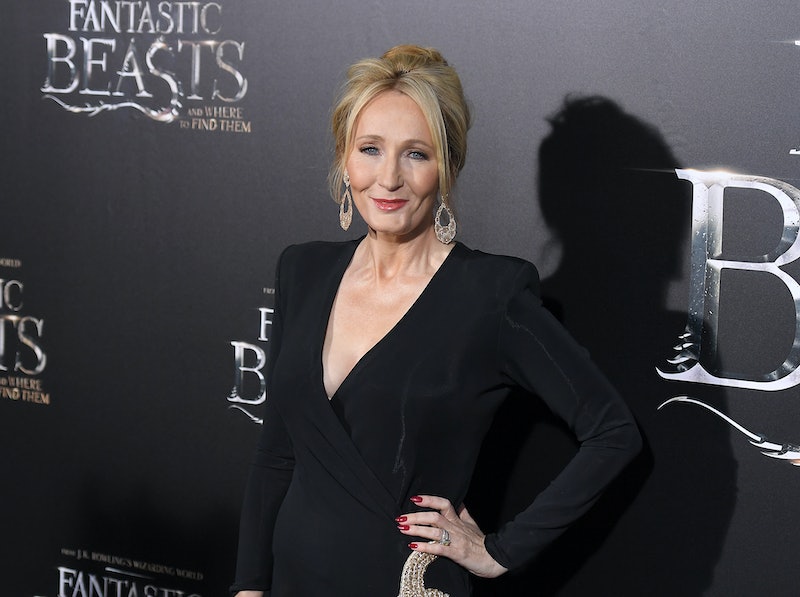 If you grew up with Harry Potter, chances are that you know the basic outline of J.K. Rowling's life story. She was a struggling single mother writing in coffee shops. Her manuscript was rejected, again and again. At long last, someone decided to give our favorite boy wizard a chance, and Rowling became hugely, mind-bogglingly successful. Pretty dang inspiring, no matter what you're trying to do with your own life. But if you're looking for a little extra boost of writing inspiration, here are some quotes straight from Rowling herself to get you started.

It can be hard, after all, to look at a juggernaut like Harry Potter when you're trying to finish your own scrappy little short story. It's just so big and successful. I mean, yes, I love Harry Potter just as fervently as any other '90s baby, but the franchise is so monstrously big, it's difficult to remember that it all came out of one person's head. It's helpful to hear what J.K. has to say about the simple, day-to-day reality of sitting down and writing. Like all of us, she started out doodling on napkins and writing character names in the margins of her notebooks. And her words can inspire even the most doubtful writer to plop down in front of a keyboard and give it a chance:

1. "Writing for me is a kind of compulsion, so I don’t think anyone could have made me do it, or prevented me from doing it."

2. "You have to resign yourself to wasting lots of trees before you write anything really good. That's just how it is. It's like learning an instrument. You've got to be prepared for hitting wrong notes occasionally, or quite a lot. That's just part of the learning process. And read a lot. Reading a lot really helps. Read anything you can get your hands on."

3. “I've no idea where ideas come from and I hope I never find out; it would spoil the excitement for me if it turned out I just have a funny little wrinkle on the surface of my brain which makes me think about invisible train platforms.”

4. “My favorite literary heroine is Jo March. It is hard to overstate what she meant to a small, plain girl called Jo, who had a hot temper and a burning ambition to be a writer.”

5. “I just write what I wanted to write. I write what amuses me. It’s totally for myself. I never in my wildest dreams expected this popularity.”

6. “I've been writing since I was six. It is a compulsion, so I can't really say where the desire came from; I've always had it. My breakthrough with the first book came through persistence, because a lot of publishers turned it down!”

7. “Sometimes the ideas just come to me. Other times I have to sweat and almost bleed to make ideas come. It's a mysterious process, but I hope I never find out exactly how it works. I like a mystery, as you may have noticed.”

8. “Whatever job I had, I was always writing like crazy. All I ever liked about offices was being able to type up stories on the computer when no one was looking. I was never paying much attention in meetings because I was usually scribbling bits of my latest stories in the margins of the pad or thinking up names for my characters. This is a problem when you're supposed to be taking minutes of the meeting.”

9. “I didn't write with a target audience in mind. What excited me was how much I would enjoy writing about Harry. I never thought about writing for children―children's books chose me. I think if it is a good book anyone will read it.”

10. “My youngest child asked me the other day, ‘Mummy, if you had to choose between us and writing, what would you choose?’ And I said, ‘Well I would choose you but I would be very, very grumpy.'”

12. “Be ruthless about protecting writing days, i.e., do not cave in to endless requests to have ‘essential’ and ‘long overdue’ meetings on those days. The funny thing is that, although writing has been my actual job for several years now, I still seem to have to fight for time in which to do it. Some people do not seem to grasp that I still have to sit down in peace and write the books, apparently believing that they pop up like mushrooms without my connivance. I must therefore guard the time allotted to writing as a Hungarian Horntail guards its firstborn egg.”

13. “I can write anywhere. I made up the names of the characters on a sick bag while I was on an airplane. I told this to a group of kids and a boy said, ‘Ah, no, that’s disgusting.’ And I said, ‘Well, I hadn’t used the sick bag.’”

14. "Write what you know: your own interests, feelings, beliefs, friends, family and even pets will be your raw materials when you start writing. Develop a fondness for solitude if you can, because writing is one of the loneliest professions in the world!"

15. “Unlike any other creature on this planet, humans can learn and understand, without having experienced. They can think themselves into other people’s places. We do not need magic to change the world, we carry all the power we need inside ourselves already: we have the power to imagine better."