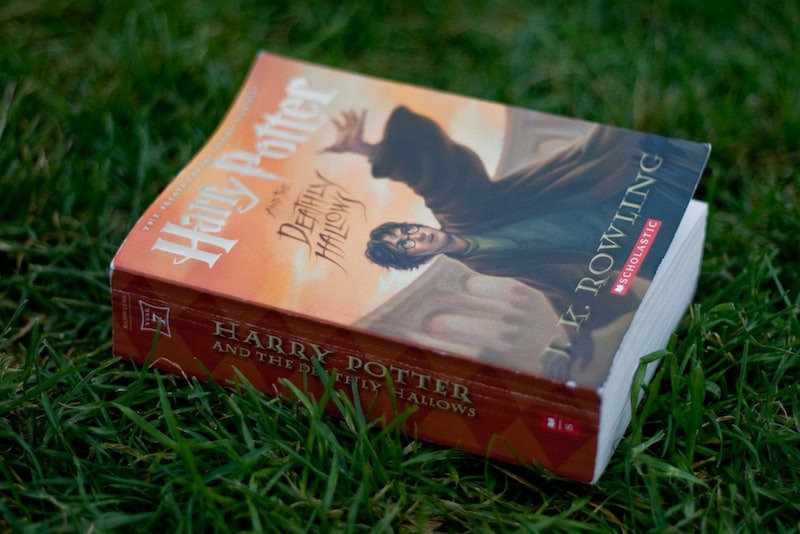 You've heard it before: the best stories are those inspired by real life. The same theory applies to characters, or at least it does in the case of the Harry Potter series. Over the years, J.K. Rowling has shared more than just seven books with her fans. Through interviews, social media posts, the Pottermore site, and more, the author has shared character backgrounds, additional HP-related stories, and even the answers to some of our biggest questions about the series, including its inspiration.

With a cast of characters as real, as complex, and as undeniably lovable (yes, that even applies to the ones that are loathsome) as the ones in the wonderful wizarding world of Harry Potter, fans of all ages have always been curious about them, their roots, and whether or not the Harry and the gang were based on real people.

The answer, in short, is... sort of. Some of the most iconic characters, including the members of Golden Trio themselves, and some of the more minor but equally unforgettable characters are, at least in part, inspired by real-life people. Professors from Hogwarts, Harry's friends and foes, and even muggles have all been influenced by people from Rowling's real life. Although Rowling has revealed connections between people from her past and present to characters in her bestselling series, it's safe to say that the magic and the wonder of each one was a product of Rowling's rich and imaginative writing, because, let's get real, is there anyone who has done it better?

From mean teachers to rambunctious neighbors, here are 9 real-life people who helped to inspire your favorite Harry Potter characters:

Harry and his real-life inspiration Ian Potter share a lot more than just a last name. Ian, who is now a damp-proofing technician, grew up four doors down from Rowling, and was just as mischievous as Harry when he was younger. Not to mention that Ian used to dress up like a wizard. I mean, did Rowling need much more inspiration than that?

The identity of Ron Weasley's real-life inspiration has not been fully revealed, but Rowling did admit that Harry's best friend is based off of her own and oldest friend, Sean. We can only imagine that, like Ron, Sean is lovable, goofy, and loyal, no matter what.

If you had to guess which character J. K. Rowling based off of herself, would you have guessed Hermione? Rowling has admitted that her younger self and Hermoine have a lot in common — both are obsessed with books, studious, and driven. I'm sure teenage Rowling was just as sassy, too.

Teachers shape their students' lives more than they know. Take John Nettleship for example. The head of science at Rowling's old school influenced one of Harry Potter's most loved (or hated, depending on who you talk to) characters. Although Rowling has said Snape is a combination of several real-life people, the similarities between Nettleship and Hogwarts' most feared teacher are pretty strong, and while Nettleship was taken aback by the revelation, he has since come to terms with his unintentional stardom.

Remember how terrifying Hagrid seemed to Harry when he knocked down the door? His huge beard and enormous stature is enough to scare the pants off anyone, but who can be scared of someone as sweet and caring as Hagrid — that is, once you get to know him. As it turns out, Hagrid's character was based off of a Hell's Angel that Rowling met in the West Country, or that is the story according to Robbie Coltrane, the actor who plays Hogwart's groundskeeper. The biker, whose appearance first alarmed the author, turned out to be sweet and harmless, just like Hagrid.

Though she never gave a name, Rowling did admit that Dolores Umbridge, the character she likes the least, is based off of a teacher she once had. Like Umbridge, Rowling's unlikable teacher was seemed to dislike Rowling as much as Rowling disliked her. Not to mention that she had an affinity for girlish accessories.

Not all grandmothers are sweet and affectionate. J.K. Rowling's maternal grandmother, Frieda, was more like Vernon's sister, Aunt Marge, and preferred her dogs to most people. Poor Rowling!

Could you imagine that there is a person out there worse then Gilderoy Lockhart? According to Rowling, Lockhart's "living model was worse," though the author has never given their name. Like the famous fibbing wizard, Lockhart's real-life inspiration loved to lie and tell stories, only his or hers were much more outrageous.

There is only one real-life person to have ever gone to Hogwarts: Natalie MacDonald. A huge Harry Potter fan, 9-year-old Natalie was sick with leukemia when a family friend sent Rowling a letter expressing Natalie's love of the books. Rowling not only responded to the letter, but shared secrets and plot twists with Natalie. Although Natalie passed away from her illness, she will live on forever in Harry Potter in the Goblet of Fire, in which she was sorted into Gryffindor.