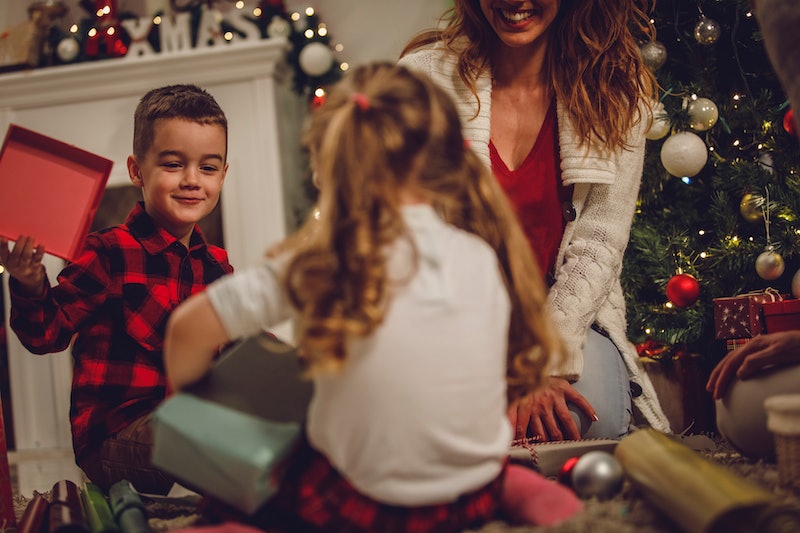 The holidays provide an awesome opportunity for friends and families to come together and show their love and appreciation for one another. But, like anything, they can also perpetuate some problematic social norms. Gender norms show up during the holidays in the same ways they show up everywhere else — and in a few specific ways unique to the season.

From gendered toys to expectations that women prepare the meals, the holidays are some of the most regressive occasions when it comes to gender roles. In an article for Ozy, Sean Braswell claims that Thanksgiving wages a "war on women," since it's considered the "time for the ladies to don the aprons and the guys to hit the couch," and the same could be said for Christmas, Hannukah, and New Year's.

Fortunately, there's a lot we can do to combat sexism during the holidays. While having conversations with our families about social justice may be uncomfortable, we can at most get our relatives to think differently and at least make a valiant effort. We can also avoid contributing the the problems ourselves. Even if we have more traditional families, we don't have to subscribe to their traditions as adults.

Here are a few ways gender norms rear their heads during the holidays — and how to combat them.

Expecting Women To Do The Work

From setting up the Christmas tree to cooking the latkes, it's often assumed that the family matriarchs will do the work necessary to entertain and accommodate the family. This isn't fair, especially since it makes what should be a celebratory occasion a stressful one. An easy way to prevent this is to volunteer to help out around the house.

Since food is a big part of the winter holidays, body-shaming and diet talk can show up at family dinner tables and holiday parties. To combat the conventions of eating beyond the point of fullness and making up for it as a new year's resolution, listen to your body, make a more body-positive resolution, and focus on your loved ones rather than the food.

While some children prefer dolls or action figures, we often project our own ideas about gender onto them with our gifts. If you're charged with getting a gift for a child, ask them what they want or get them something gender-neutral rather than giving gifts based on assumptions.

Even past childhood, it's common for men to receive tools and grilling equipment while women get jewelry and home goods. Once again, you can prevent this by asking your loved ones what they want or getting them something unconventional, since they've probably gotten all the stereotypical stuff already anyway.

Many women dread visiting home for the holidays because they know they'll be bombarded with questions like "are you dating anyone?" and "when are you having kids?" or comments on their looks. Instead of asking these questions, support the women and girls in your life by asking them about their work and their passions.

More like this
Sandra Bullock, Girlboss Extraordinaire
By Matt Harkins & Viviana Olen
81 Epic Truth Or Drink Questions To Play 'Say It Or Shot It' With
By Bustle UK
Jennifer Lopez Found The Perfect Ben Affleck Throwback Video For Mother’s Day
By Stephanie Topacio Long
Here’s What Sarah Jessica Parker’s Canned Cosmo *Actually* Tastes Like
By Emma Garza
Get Even More From Bustle — Sign Up For The Newsletter