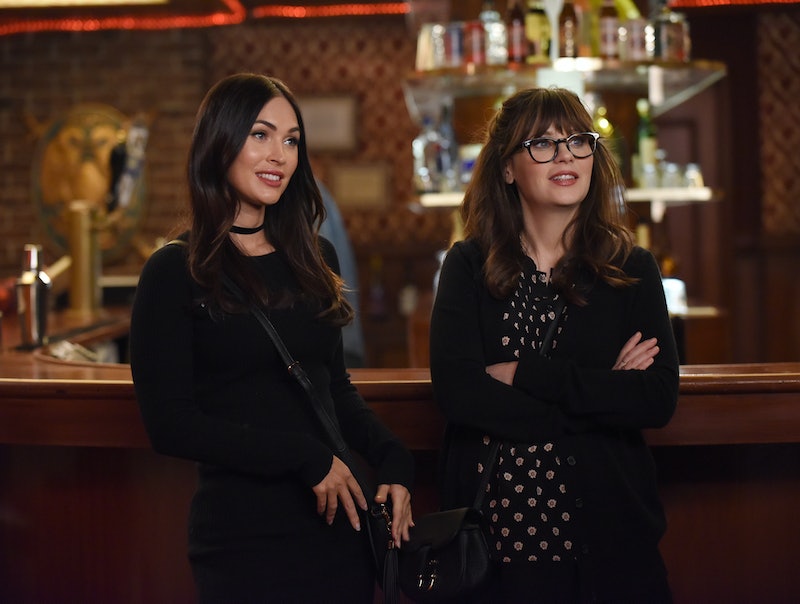 You're going to need some Jessica Day-level optimism to get through the next few weeks, because New Girl is on hiatus for the holidays. It's always hard when our favorite shows take a break around this time of year, and many of us find ourselves wringing our hands, waiting for the new year to come so that the usual TV schedule can return to our lives. Luckily, though premieres across all networks vary throughout the month (and some won't come until after January), New Girl Season 5 comes back very, very soon.

New Girl will return on Tuesday, Jan. 3 at a new time: 8 p.m. To say I'm excited is an understatement. More Jess! More Schmidt! More Cece and Nick and Winston and even Reagan (Megan Fox), who admittedly has grown on me. I'm even excited to see more of Jess's new boyfriend, Robby, because it's about time Jess had a really nice relationship that didn't end in angst. I also can't wait to see more of Cece and Schmidt, and how they juggle being married and "grown-up" while still hanging out at the loft all the time. Though we still have a bit of time before the New Girl gang comes back into our lives, I already have a list of what I want Season 5 to include when it continues.

I already said I want Jess to be happy in 2017 and since her career is already on the rise and she has a great group of friends, all that's really left is a fulfilling relationship. It's amusing to see her relationship mishaps, but she deserves some stability, and I hope she finds her happy ending, with Robby or whoever will make her truly happy.

We already know that Reagan is here to stay (at least for a while), and since she's moving into the loft, Jess will have to fully get over Nick — if she hasn't already. Now that they're going to be roommates, I want to see these two really become good friends. Cece's moving out soon, so Jess will another friend in the loft.

I know, I know... what's New Girl without Jessica Day? But how awesome would it be to have an episode focusing just on Schmidt and Cece as they adjust to married life and settle into their new home?

Who remembers the infamous camping trip of Thanksgiving past? Sure, it didn't end that great, but it did bring the group closer together. I vote for another big trip with everyone (including Reagan and Robby).

I love Winston, but he's never had an especially strong storyline of his own, and often seems to be the comic relief of the show instead. Yes, he's in a relationship with Aly and has Ferguson, but I'd really love to see Winston come into his own and evolve as a character more.

I know we have to wait until Jan. 3 to find out what New Girl has in store for us, but I think it's safe to say I can't wait to see the gang return.

More like this
'Unforgotten's Brand New Character Joins At A Pivotal Moment For S5
By Bustle UK
Jodie Whittaker Isn't Giving Up Her Role As Doctor Who *Just* Yet
By Sabah Hussain
Netflix Just Revealed When 'Never Have I Ever' Seasons 3 Will Premiere
By Gretchen Smail and Alyssa Lapid
Will The Pentaverate Get A Season 2?
By Kadin Burnett
Get Even More From Bustle — Sign Up For The Newsletter