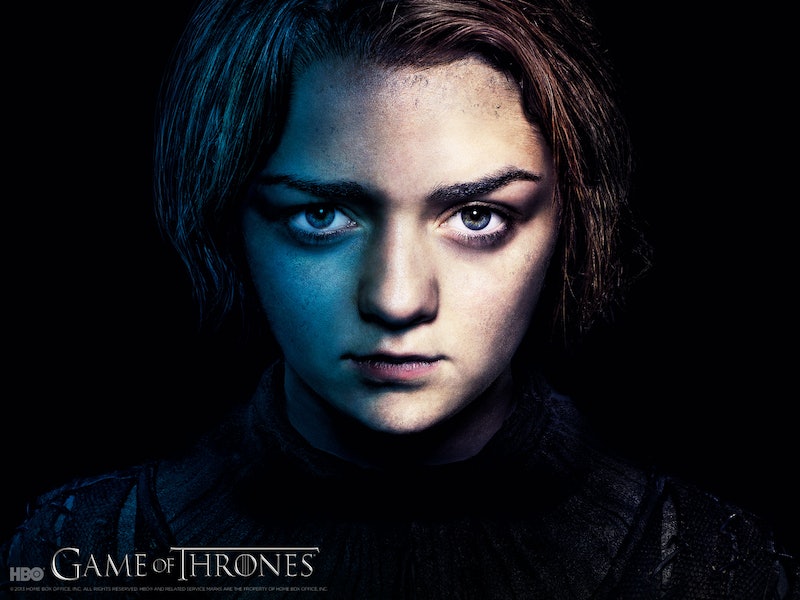 In case you’ve been living under a very heavy rock for the past month or so, there is a lot of buzz surrounding the return of a little series by the name of Game of Thrones. The HBO epic drama based on George R.R. Martin’s book series A Song of Ice and Fire is kiiiiiiiiiiind of a huge deal. So much so that when a math teacher in Belgium was fed up with the behavior of his students, he threatened to spoil the series for the classroom full of fans. After having read the entire book series, the teacher vowed to write the name of the next character who dies on the board in order to spoil the show for his misbehaving pupils. Now those are some serious King Joffrey moves right there. Props, teach. And now we're here to provide a little of our own classroom arsenal with some book-based Season 4 "spoilers" for Ms. Arya Stark.

Die-hard fans of Martin's work know that there are puh-lenty of differences between the HBO series and the books. And when the Internet nearly imploded after the "Red Wedding," everyone who read the books was like, "DUH, DUMMIES." So before Season 4 gives any of our readers more gray hairs or stomach ulcers, we wanted to give you a little heads-up about one of your favorite characters — if you are champing at the bit like we are. Warning: HUGE SPOILERS. NOTHING BUT SPOILERS AHEAD.

When we last saw Arya in the HBO series, she witness the mega-brutal "Red Wedding" and was knocked unconscious by her captor and protector Sandor Clegana, a.k.a. The Hound. His methods are a bit violent, but he actually did it so they could get the hell out of Dodge. Arya is back on the run. According to the books, looking ahead, here's what's going on with our No. 1 Tough Girl.

Game of Thrones make a few glaring omissions when it comes to Arya. For starters they reaaaaaaaaaaallllly ignore the relationship she has with her Direwolf Nymeria. Through her dreams, Arya is able to see the future. In the books, for example, Arya has a dream with Nymeria in which she drags the body of her mother* out of a river, which foreshadows her murder in the "Red Wedding." Game of Thrones barely touches on this special power which Arya holds.

Arya is also much MUCH stabbier in the book series. We tend to only see Arya's sword-wielding prowess in training. However, in the books, she uses her skills with gruesome results.

*Catelyn Stark totally comes back from the dead in the books, by the way, everyone.

In the Season 3 finale, Arya awakes from her blow to the head at witnesses her brother Robb's dead body being paraded around. Later, she overhears a man boasting about how he stitched the head of the Direworlf Grey Wind onto her brother's decapitated body. So, she naturally takes one of Hound's knives and stabs the guy. She and Hound kill a whole group of men, and when the two of them are left standing, Arya says, " valar morghulis," which we know as the Season 4 tagline "All Men Must Die." Wholesome!

As Arya and Hound continue toward a town called Saltpans, Hound grows weaker and weaker. When he falls from his horse, rather than giving him a mercy kill, she leaves him to suffer and die slowly. (Damn, girl!) When she finally reaches the town, she sells her horse in order to gain passage on a ship called Titan's Daughter which is heading to Braavos. On the ship, she takes the name Salty. Her fierce demeanor strikes fear into the hearts of many sea-dazed men. Because SHE'S ARYA F-IN STARK.

This is where things get really juicy. Arya joins The House of Black and White and is initiated into the Guild of the Faceless Men (Which is a religious society of assassins, by the by). During her training with the very dark and eery brigade of murderers (has a nice ring to it, no?), she takes on the persona of a young street urchin. She masks herself in the shadows of the town in order to learn everyone's secrets and to truly master the art of lying.

Her first kill is a deserter from the Night's Watch named Dareon. The next morning, she drinks milk that makes her blind. When she regains her sight, she is given her first true assassination assignment is an old man who sells insurance to ships. She tries to find out why she must kill him, but her trainer tells her to not try and judge the man and to just do as she is told. She slips a coin coated in poison into the bag of a captain who is bartering with her target and the old man does in fact die days later. This earns her an apprenticeship with Izembaro, a mummer and member of the Faceless Men.

Not only does Arya take the face of an urchin, she now has a new name and identity. Mercedene or "Mercy" is her new name under the tutelage of Izembaro. When Harys Swyft arrives in Braavos, Izembaro and the fellow mummers put on a play that depicts Tyrion Lannister's role as Joffrey's right hand man. In the play, Arya is one of the maids who is raped by Tyrion. Before the play begins, Arya seduces one of Swyft's guards into her bedroom... where she then murders him and dumps his body into a canal right before stepping on stage. Cold. And this is where we leave Arya in the forthcoming book The Winds of Winter which is previewed on Martin's website .

Need to do a little catching up before Sunday's big premiere? HBO has thankfully done the work for you: