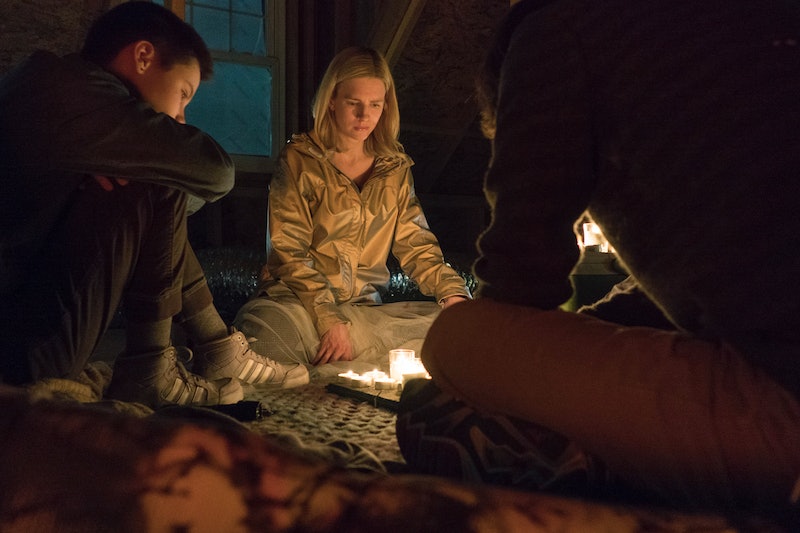 While many people watch Netflix to forget the stress of their everyday lives and relax, there is no way to relax while watching The OA. Netflix's dense science fiction program demands full attention, especially as the series goes to progressively weirder and weirder territory. Spoilers for all eight episode of The OA ahead. What starts as a mystery about a formerly blind girl who reappears after going missing for seven years soon turns into a saga of attempting multidimensional travel through dance sequences or "movements" and a mad scientist who might be an angel hunter. There's a lot going on here, and no sign of when (or if) The OA will return for Season 2 to provide answers. In the meanwhile, fans have taken to the internet to pontificate some The OA theories that will change how you look at the show.

Everything that happens in The OA boils down to one question — is Prarie Johnson telling the truth? She spins a fantastical tale for her devoted listeners, one in which she is the OA, or the Original Angel. As she weaves her tale throughout the season, people constantly doubt her. The matter of who is telling the truth and who is lying has also been questioned by viewers, and that's lead to some fantastic theories.

Prairie Is Telling The Truth & The FBI Knows

One of the highest-profile actors, Rogue One star Riz Ahmed, in The OA is only on the show for a few scenes, but they could be a major key to the story. Later in the season, French discovers a collection of books under Prairie's bed that roughly cover the breadth of the story that she was telling them, making it seem like she is a liar. But why was there an FBI agent snooping around her house prior to French finding the books? Reddit user whatsthisforanyway believes the books were a plant:

"Throughout the whole season she gets closer to the FBI guy that's 'helping her' by listening to her story. When in fact he's working against her, with the FBI. Hence why he was at the family's house when they were at the hotel and why he planted those books for someone to find and discredit her."

It's an out-there theory, but this is also an incredibly out-there show where something like that is entirely possible.

Prairie Is In Another Dimension At The End

The end of the series shows Prairie in a mysterious white space after being taken away in an ambulance. She was shot after her group of friends thwart a school shooter by performing the five movements that supposedly helps people travel between dimensions, and after getting struck by a stray bullet, she finds herself in a new, otherworldly location and utters the first season's final word: "Homer?" Did Prairie finally manage to track down her fellow prisoner in some kind of afterlife? Did her injury, along with the dance, trigger the near death experience that will give Prairie everything she is looking for? We won't know for sure unless the series is renewed for Season 2, but it seems likely.

French & Homer Are Different Versions Of The Same Person

When French is sneaking around Prairie's home in the finale, for a moment he looks at himself in the mirror and sees Homer. It could just be his mind playing tricks on him, but how would his mind know exactly what Homer looks like? The show has already talked about multiple dimensions, so is it possible that when French was looking in the mirror he was seeing a multi-dimensional reflection of himself? This would explain why French and Prairie are so drawn to each other and why he is so willing to go along with her out-there ideas.

It appears to be a small plot hole, but it could be a major key to the reality of the show. In the final episode, when the shooting occurs, Steve is present in the school cafeteria. However, Steve had been sent to (and evaded) a reform school, so what is he doing back in school like nothing happened? Is he just hanging out? Or is Steve in another dimension? It seems far-fetched, but don't forget that the show established that a side-effect of trans-dimensional travel is amnesia. If they've practiced their routine so many times, perhaps the characters don't even remember going to multiple different dimensions. Or, it was just a plot hole.

Prairie Is Lying To Protect Herself

Memory is an odd thing. People rely on memory in all their decision-making, and yet it can be tricked so easily — even by one's own mind. In Episode 7, it's revealed that not every believes Prairie was in some kind of science prison where she and others learned how to transcend space and time. Others think she was simply kidnapped and tortured for years — and what if they're right? When Prairie tells her mother that she is the Original Angel and the scars were a self-inflicted method of remembering the particular movements that could help her traverse dimensions, her mother replies by smacking to the face. Perhaps Prairie's story as the OA is an illusion she's built for herself to try and repress a different traumatic experience, and that the others know that for years she was being hurt with much less hope. Perhaps Prairie's story is littered with half-truths.In a year full of mysterious, mind-bending science fiction shows like Stranger Things and Westworld, The OA closes out 2016 with TV's most complex mystery yet. There are no clear answers to the story of Prairie Johnson, aka The OA, but with so many clues to pick apart, fans will surely be occupied until the series' (hopeful) return.