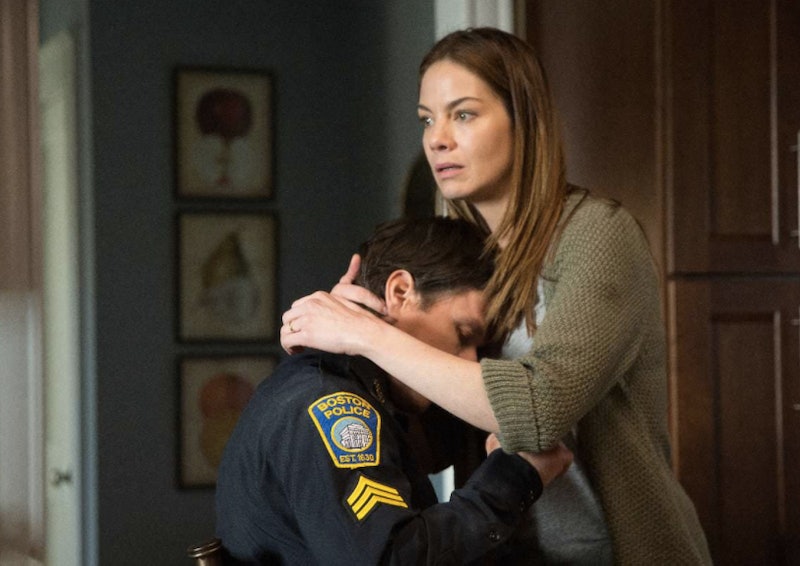 In unimaginable times of tragedy, people find a way to band together and let love prevail. That doesn't necessarily mean the spotlight is granted to all who help communities overcome darkness. This notion is depicted in the upcoming film Patriots Day , an intense retelling of the 2013 Boston Marathon bombings. The film stars Mark Wahlberg as Boston Police Sergeant Tommy Saunders, a fictional character created as a hybrid of several policemen and their actions during the bombings. J.K. Simmons is alongside him as Watertown Police Sergeant Jeffrey Pugliese, a real man involved in the events. There's no denying both characters (and their real-life counterparts) committed acts of heroic greatness. But the movie has a interesting way of shining light on unrecognized heroes — namely their wives and families — whose names may not be mentioned on the news. Cast members Simmons and Michelle Monaghan (who plays Saunders' wife Carol), praise their characters as they put themselves and their families in their horrifying shoes.

Simmons' character is introduced to the audience as he lies in bed with his wife Conny (also inspired by Pugliese's real wife), leaving her behind to go to work as he would any other day. Monaghan's character depicts the reality of being married to someone in the force, as she's left hopeless and unsure if her husband will return safe if at all. Both characters and their lives humanize such tragic, larger-than-life circumstances, and reveal how selfless unrecognized heroes are, even if they're not in the action, drawing weapons.

"Conny, in this case, the spouse, the family members of these guys, let’s face it, put their lives on the line every day. Even in a sleepy little town like Watertown," says Simmons. While promoting the film, which premieres in select theaters on December 21st (and nationwide January 13th), the actor sits across from me, attempting to imagine himself in Pugliese's situation. He explains that when the bombers made their way to Watertown, MA, Pugliese emerged into the incredibly dangerous threshold, firing his weapon for the first time since starting his job in 1980. But as Simmons points out, you never know. And this uncertainty is a sacrifice Conny, Pugliese's two children, and all loved ones of those in such professions continue to make every day.

"For the spouses and the kids and parents of guys who are doing this, I mean, I could only imagine," says Simmons, who has a wife and two teenaged kids. "I get nervous when my son, who’s 18, drives both of [our kids] to school. I still get a little nervous about him taking the mini van down Ventura Boulevard," the actor says.

Monaghan's character Carol represents the same sort of humanity in a raw and real way. She visits her husband (Wahlberg) at the finish line before the attacks begin, giving him a kiss goodbye as she normally would. When the terror ensues and she witnesses the bombings, her husband demands she goes home to be safe as he emerges into the fight, leaving her in utter despair. "I think Carol really represents probably the majority of people when something like this happens," says Monaghan. "Most people, hopefully, aren’t directly impacted in that way."

Even though people like Monaghan's character may not be directly effected, that doesn't lessen the emotional impact on them. "You still feel that sense of vulnerability and sense of fear and helplessness," says the actor. "I sometimes think that their families and loved ones that are left behind make just as much as a sacrifice in wondering if those folks are ever going to make it home. They go through their own mental breakdown."

Monaghan, who's married with two children like her co-star Simmons, attempts wrapping her head around that sacrifice, applying inspiration from her own family. "Any of us can go through something traumatic and devastating, as [a] partner, you do anything to put yourself in their shoes to take away their pain," she explains. "I do that with my kids every single day. It’s a very intimate and beautiful experience."

And while neither actor can even fathom a life in law enforcement and the great deal of courage it takes, it's clear they're in complete awe of their characters and those they're inspired by. "These guys are just such remarkable human beings to me. It’s just a job for [them]," says Simmons. "And by the way, these are the underpaid, under-appreciated professions that serve humanity." As unfortunate as that fact is, it makes these heroes that much more admirable.

"These were just regular people doing their job or just normal, everyday citizens going about their business," says Monaghan. "It makes it painful to watch because you really see so many innocent victims who were traumatized that day." When watching Patriots Day, audiences will develop an appreciation for all heroes involved in the Boston Marathon bombings and any tragedy — whether they're in the line of fire or not.

More like this
'Gentleman Jack’s Cast & Crew Are Keen On Season 3, Too
By Frances Stewart
Everything To Know About Marvel’s 'Thor: Love And Thunder'
By Grace Wehniainen
The 'Hocus Pocus' Sequel Finally Has A Release Date & It Makes Total Sense
By Shannon Barbour and Radhika Menon
What Does Doctor Strange’s Third Eye Mean?
By Arya Roshanian
Get Even More From Bustle — Sign Up For The Newsletter