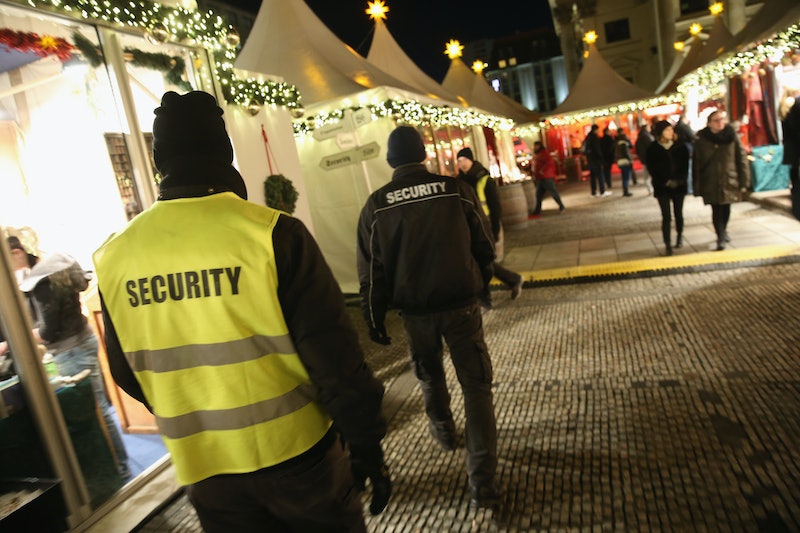 City police said Monday that a truck ran through a Christmas market in Berlin. They called it a "severe incident," and photos show overturned stalls and a strong emergency response. Initial reports point to at least nine dead and as many as 50 injured. The crash occurred at a market in front of Kaiser Wilhelm Memorial Church, which is just blocks from the Berlin zoo in the western part of the city, which is popular for shopping, according to the Associated Press. Update: On Monday evening, Berlin police raised the death toll to 12.

The truck's driver has been apprehended after initially appearing to have fled the scene. A co-driver in the truck may also be dead, according to Germany's N24 TV. What remains unknown is whether the incident was an accident or a deliberate attack — it is suspected to be intentional, police initially said. Reuters reported that German media are pointing to an attack, given the preliminary evidence and reports from police. One witness concurred. Emma Rushton sent her account to The Telegraph via Twitter:

From my opinion, it was going at 40mph, there was no road nearby and no signs it was slowing down. It did not feel like an accident. There was no way it could have come off like an accident, it was through the middle of the market. The story where mulled wine was being served was crushed. I saw people bleeding, lying in the pavement.

With the manhunt for the driver finished, the police are also focusing on clearing the area, containing what they fear is a possible gas leak provoked by the crash, and sharing information on the victims with their families. The State Department's travel Twitter suggested that Americans in Berlin contact their families to let them know they are OK. There's no word yet on the nationality of any of the victims. Facebook has activated its "Safety Check" feature.

A livestream from the area is ongoing, and a large number of ambulances remain on the scene. There was also a Facebook Live video recorded by a journalist from the Berliner Morgenpost, one of the city's newspapers. He seemed to be at the market immediately following the crash. Sirens sound as the reporter walks around. There is a clear view of the truck and the overturned stalls that lie in its wake.

Just weeks ago, the State Department issued warnings about the possibility of an ISIS attack at a Christmas market in Europe. The statement read:

The Department of State alerts US citizens to the heightened risk of terrorist attacks throughout Europe, particularly during the holiday season. US citizens should exercise caution at holiday festivals, events, and outdoor markets.

The Germans might have also been aware of a heightened risk. Welt reported that German intelligence have been on alert about a possible Christmas market attack — specifically in Berlin.

Just what these agencies knew, and when, surely be contentious in the days to come as the police continue to investigate.