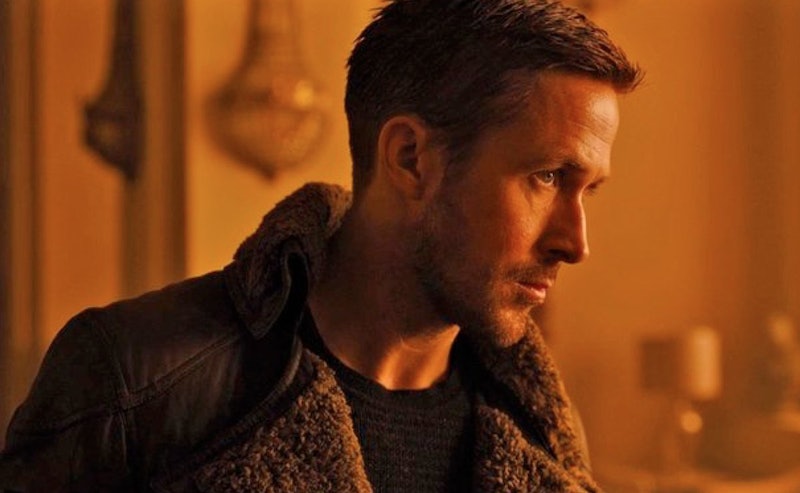 Although remakes will always be a thing in Hollywood, for better or worse, a new trend has started to emerge over the past few years. Instead of reviving a dormant franchise with an updated re-tread of the original, it is resuscitated with a sequel that acknowledges the years — or sometimes decades — that have passed in the interim. Next year's hotly-anticipated Blade Runner sequel, produced by Alcon Entertainment, follows in the footsteps of films like Mad Max: Fury Road, Jurassic World, Creed, and Star Wars: The Force Awakens by bringing fans of the 1982 original a new story involving Harrison Ford's replicant hunter Rick Deckard. And now the first Blade Runner 2049 teaser is here to give those fans their fist glimpse at the sequel 35 years in the making.

With the exception of Fury Road, most of these belated sequels aren't directed by the original filmmaker, and 2049 is no exception; while Ridley Scott (whose other forays into sci-fi include Alien and The Martian) won't be behind the camera this time around, he remains as an executive producer, and has left his franchise in capable hands. In fact, 2049 unites two of the biggest Oscar players this year: star Ryan Gosling (currently on track for a Best Actor nod for the musical La La Land) and director Denis Villeneuve (a dark horse Best Director contender for his sci-fi film Arrival).

The teaser opens with a glimpse at the rainy, smoggy streets of future Los Angeles, that look so faithfully reproduced they could be reproduced stock footage from the 1982 film. (In fact, the footage is underscored by reproduced stock audio from the original, a piece of dialogue in which Deckard intones on the "benefits" and "hazards" of replicants.) The orange-tinged desert may be a new sight — as well as Gosling's handsome mug — but the jacket he's wearing is eerily reminiscent of the one Harrison Ford sported throughout the original, suggesting that the trench coat is actually a uniform of the blade runner… or Gosling's character is a major Deckard fanboy.

And it's not just the sets and costumes and voiceovers that bring to mind the 1982 film. Despite the fact that, like Scott, original composer Vangelis did not return to work on the sequel, the music manages to perfectly evoke the man's classic score. (The music this time around is written by Icelandic composer Jóhann Jóhannson, who has previously collaborated with Villeneuve on three of his past films: Arrival, Sicario, and Prisoners.)

But perhaps the most revealing part of the teaser comes when we finally see Ford as Deckard. The lack of de-aging CGI that's becoming more prevalent these days in films like Rogue One and Captain America: Civil War should put to rest one long-simmering fan theory about the original Blade Runner; namely, the idea that Deckard is a replicant. Since replicants are designed with a four-year lifespan, the idea of a much older Deckard still existing 30 years after the events of the original film would be impossible if he were one of the machines he spent his career hunting.

While this could mean Deckard is simply a normal human being, there are still a couple of tantalizing possibilities: that the Deckard in 2049 is the man the replicant Deckard in the original Blade Runner was modeled after, or that Deckard is somehow a special kind of replicant designed to live longer, like the original film's Rachael. We'll have to wait until the sequel premieres to learn the truth either way… if it even has a definitive answer to the question waiting for us.

Here's the the official synopsis for the sequel: "30 years after the events of the first film, a new blade runner, LAPD Officer K, unearths a long-buried secret that has the potential to plunge what’s left of society into chaos. K's discovery leads him on a quest to find Rick Deckard, a former LAPD blade runner who has been missing for 30 years."

Find out whether or not androids really do dream of electric sheep when Blade Runner 2049 opens on Oct. 6, 2017.