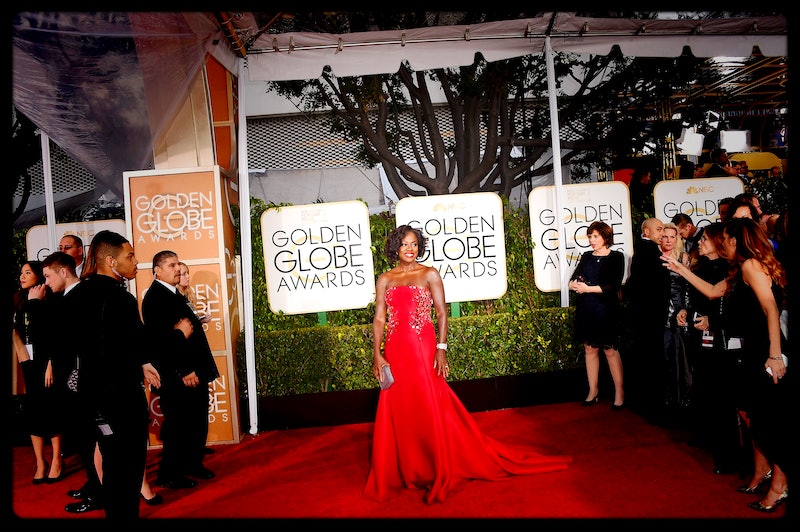 You won't even need to have a Twitter account to join in and watch the fun. As long as you're in the United States, fans will be able to stream pre-show coverage, which begins 6 p.m. ET on Jan. 8. That's right, all the hottest looks, interviews with celebrities, and dazzling smiles are right at your fingertips or whatever device you've got that can pull up Twitter. All you have to do for the official scoop straight from the Beverly Hilton in Los Angeles is head to goldenglobes.twitter.com, the Twitter Moments section, or the Golden Globes Twitter account. It's actually blowing my mind how easy it will be to watch the anticipation-heavy part of the Golden Globes. How great will it be to be in the comfort of, well, anywhere, watching the excitement brew for the actual awards show?

As far as award show coverage, this innovative idea is super interactive. According to The Hollywood Reporter, the pre-show will feature nominee interviews and talks with presenters and other guests — but the interactive part is the source of many of these questions. Hosts of the red carpet, who have yet to be announced, will be taking questions for these exclusive interviews from Twitter users.

HFPA President Lorenzo Soria said in a statement to The Hollywood Reporter, “The Hollywood Foreign Press Association is always searching for innovative ways and original tools to reach our audience wherever it is as Hollywood comes together on one night to celebrate the best in motion pictures and television – and Twitter is the recognized partner to help us expand our audience."

This two-hour long Twitter extravaganza will be produced in part by Dick Clark Productions, which also produces the awards show.

With the adorable and hilarious Jimmy Fallon as host, a hands-on pre-show, and the usual glitz and glamour of the Golden Globes, it seems the 74th Annual Golden Globes might be the best awards ceremony yet.

More like this
Fans Don't Think Kim Kardashian Actually Ate Anything In Her Beyond Meat Ad
By Jake Viswanath
Kylie Jenner Roasts Kendall For Her Cucumber Cutting Skills On TikTok
By Jake Viswanath
These Adorable Kourtney & Travis Moments Led Them To The Altar In Italy
By Bustle Editors
Yes, Billboard Queen Angelyne Really Ran For Governor Of California
By Brad Witter
Get Even More From Bustle — Sign Up For The Newsletter