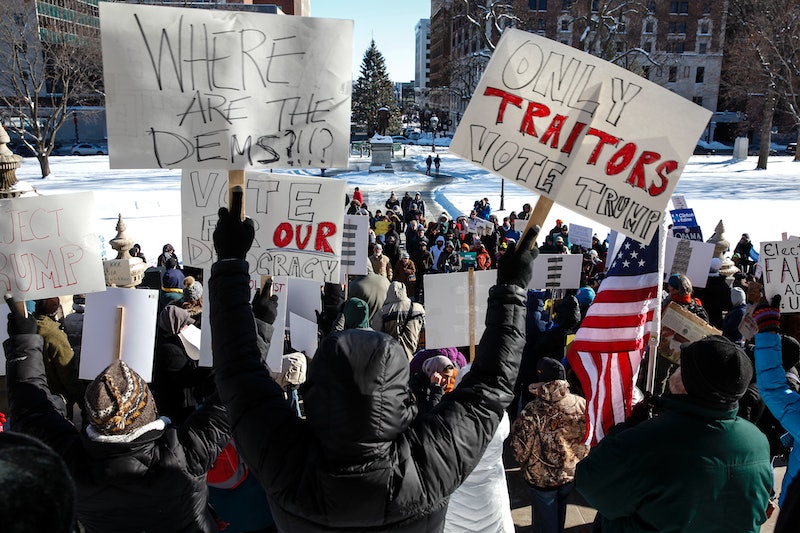 On Monday, as the Electoral College was gathering around the country to cast the official votes that will send Donald Trump to the White House, stats guru Nate Silver published a piece coming out against "faithless electors." In it, the FiveThirtyEight founder noted that faithless electors would not have any effect on Trump's victory and would present "a Constitutional crisis along the way." He continued on to give the sage, inarguable advice that what Democrats really need to do is start winning elections, but breezes past a pressing question: aren't we already having a Constitutional crisis?

With a final forecast giving Democrat Hillary Clinton a 71.4 percent chance of winning the presidential election, Silver's FiveThirtyEight model was actually one of the most bullish on the eventual winner, the Republican nominee Trump, while still putting his odds of winning fairly low. The shock that most people felt in the early hours of Nov. 9 when it became clear that not only was the election getting away from Clinton, but had in fact gotten up and left, was due in large part to the confidence with which number-crunchers (like Silver) had predicted her success. In the weeks that followed, when it became clear that Clinton would lose the presidency with not just a modest, but a record-setting victory in the Electoral College (earning more votes than any white male presidential candidate ever), the feeling among Clinton supporters that they had been cheated was palpable, and understandable.

This resentment was most likely best represented by the runaway success of Green Party candidate Jill Stein's recount effort, which raised over $7 million in an extremely short span of time, more than twice what the third-party candidate raised for her own presidential effort. The push to support the Hamilton Electors — who take Alexander Hamilton's opinions to heart that the Electoral College is supposed to safeguard against demagoguery — is just another expression of that feeling of resentment.

By late afternoon Monday, Trump had earned enough official Electoral College votes to secure his presidency, but I don't know if this means we've averted a Constitutional crisis. To me, the Electoral College is like that noise in your car that you know means you should probably go to the mechanic, but you're not entirely sure you can afford to fix whatever it is that's going wrong. Protesters, recounts, lawsuits, and threats of faithlessness in the electors are all signs that something is not right in the functioning of our democracy.

What's depressing is that perhaps, in coming this close to a real crisis and dodging it, most people will be able to tell themselves that everything is all right, and that we can make it to the next exit without the car blowing up. The reason the faithless electors were important was not because they were going to change the outcome of the election, but because they had the power to expose the Electoral College for the problematic institution that I believe it is — to both parties. With Trump's victory official, the most dangerous thing we can do is wait four years to address the ticking time bomb that is the Electoral College.