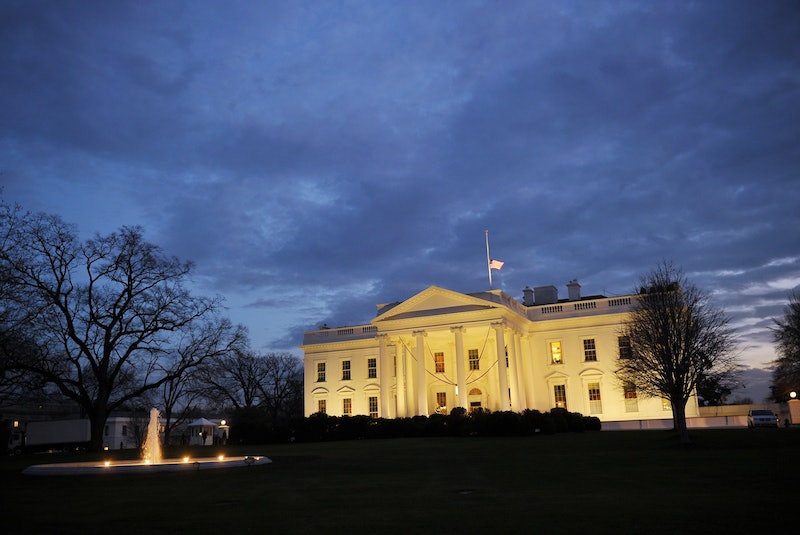 On Monday, President-elect Donald Trump officially earned the electoral votes that he needed to solidify his position as the incoming POTUS. Despite talk of faithless electors, petitions for a vote recount, and other protests, the Electoral College voted on Monday much the way that it was expected to after November's surprising election. Now, the opportunity to reverse Trump's victory may seem bleak, but there's still time to petition your representative against the Electoral College vote before January's official vote count.

Even before all states' electors had voted, it became clear that Trump would reach the number of votes he needed — 270 — to secure an official victory. According to the Associated Press, Trump had received 304 electoral votes with Hawaii left to vote later in the evening. It would seem from Monday's results, that the talk of faithless electors, or those electors who choose not to vote with their state's majority, might have been just that — talk.

Prior to Monday, many Americans had held out hope that faithless electors would change the outcome of the November election. Local reports from across the country described the flood of messages that electors were receiving, encouraging them to vote one way or another, as if the state's vote back in November didn't already dictate the electoral vote. Although some electors did reportedly turn faithless on Monday, most seemed to adhere to their representative duties.

As the Electoral College voted state-by-state on Monday, it became clear that Trump would win the title of president-elect once and for all. But, as it turns out, there may still be time to keep him from the title of president. That's because the Electoral College's votes officially won't be counted until Jan. 6. At that time, the Senate, with Vice President Joe Biden at its helm, will certify the votes of electors prior to Inauguration Day, on Jan. 20. More often than not, the Senate's electoral vote count occurs as little more than a formality, but this year, the divisiveness of November's election could make the vote count an important opportunity for dissatisfied Americans.

To effectively petition your elected representatives ahead of the vote count, focus first on your state's senators. Contact information is available online via the Senate's website. You can write, email, or call your senator, although the latter two methods may be most efficient in the short time between Monday's vote and early January's vote count. You can also find information for your representative via the House of Representatives' website. If you do reach out, be sure to keep your message brief and informed. Communicate your position against Trump, explaining why you feel that way in clear, plain language. Then, ask that your senator block the confirmation of the electoral college's vote.

To be fair, it's unlikely that Trump will be blocked from the presidency. At this point, the results of the November election and the early results of Monday's Electoral College vote have both fallen in his favor, despite widespread activism against him. Nonetheless, it's important to exercise your right of petition — and the activist spirit can only help to make society more participatory.