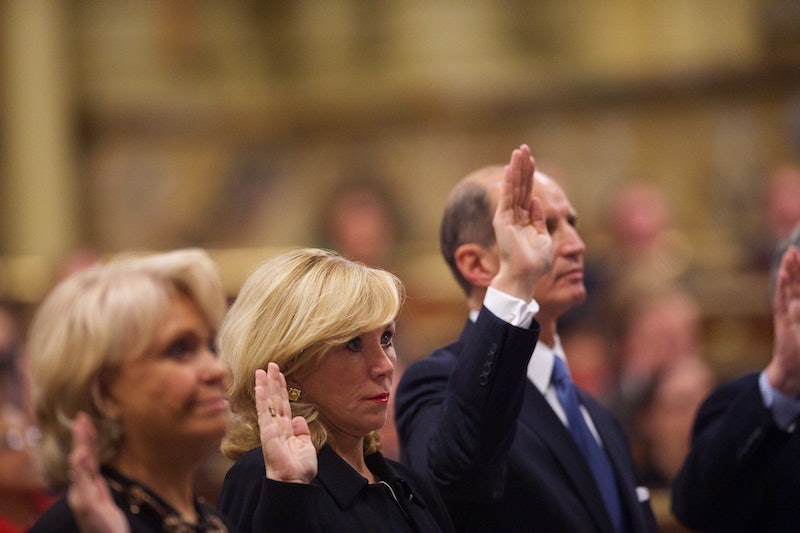 If you believe that history repeats itself, then don't expect to see Congress reject the Electoral College's vote in January. Although many Americans remain dissatisfied with the prospect of a Donald Trump presidency, the chips appear to continually fall in Trump's favor. On Monday, the Electoral College voted to confirm Trump's win back in November, and shortly after the new year begins, Congress is expected to confirm Trump's victory once again.

Electors across the country gathered in their states' capitals on Monday to cast their votes for the president and vice president. They are typically required to vote according to the results of their state's elections in November, but talk of faithless electors — or those electors who refuse to vote for their state's winner — gave some protestors hope heading into Monday's vote. Ultimately, though, that talk was not realized, with Trump securing his electoral victory.

Now, there seems to be just one more technicality standing between Trump and the White House. On Jan. 6, Congress will meet to confirm the Electoral College's vote. At that time, the electoral votes cast on Monday will become final. Barring a historic move by Congress, Trump's impending presidency will also become final at that time.

During Congress's review of the electoral votes, senators and representatives can object to one or more votes. Objections usually have to do with faithless electors, with members of Congress seeking to eliminate those faithless votes from the overall count. In order for an objection to be recorded, it must be agreed upon by at least one member of the Senate and at least one member of the House of Representatives. Although objections have been recorded in at least two previous elections, those complaints have never changed the presidential victory, according to congressional archives.

In order to change the outcome of the election, there must be more than a simple, agreed-upon objection. After objections are recorded, Congress breaks for a short time to ponder the objections and their validity. Then, elected representatives vote on whether or not to uphold the objection. But that's just step one.

Under the 12th amendment, the House of Representatives would elect the next president. There's the rub: Even if Trump were to lose enough electoral votes during the congressional vote count process to fall below the 270-vote threshold, he would likely still be selected as president, given the Republican majority in the House of Representatives. In other words, it's going to take a lot more than an objection from two members of congress during the Jan. 6 vote count to stop Trump's ascent to the White House.

It's no wonder that such a reversal has occurred before during the electoral vote recount process. Petitioning members of Congress to not just block Trump's victory in the recount, but also to block his confirmation during a 12th amendment scenario might be the only hope left for dissatisfied citizens looking to prevent Trump's inauguration later in January.

More like this
Michigan’s Governor Is “Going To Fight Like Hell” To Protect Abortion Access
By Andrea Zelinski
How To Fight For Reproductive Rights, Based On How Much Time You Have
By Courtney Young
LGBT+ Men Fleeing Afghanistan Were Denied Asylum By The Home Office, New Findings Show
By Sam Ramsden
Twitter Is Buzzing Over New ‘Doctor Who’ Lead Ncuti Gatwa & His Historic Casting
By Stephanie Topacio Long
Get Even More From Bustle — Sign Up For The Newsletter