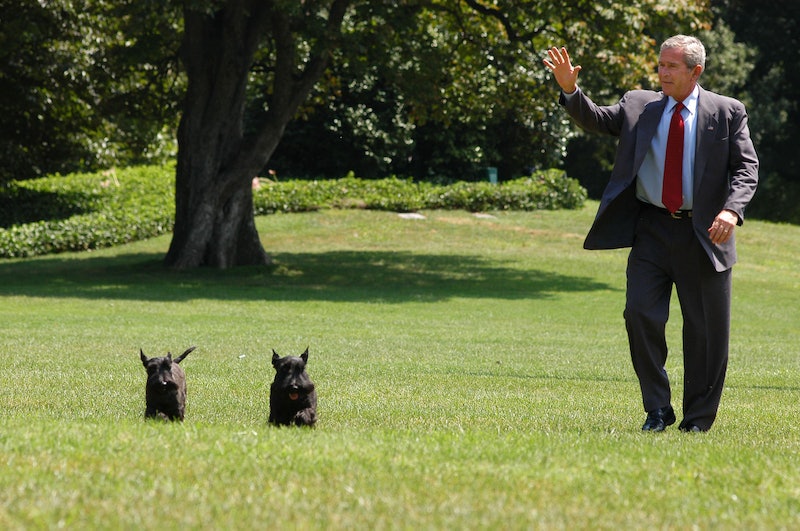 Turns out that Vladimir Putin is a professional troll. The newly single Russian president apparently dissed former President George W. Bush's Scottish terrier Barney on two separate occasions when Bush was in the White House. In other words, Putin is a skilled one-upper.

In a Today Show appearance on Friday, Bush, a budding artist who is unveiling a painting exhibit on Saturday, dished on Putin's mightier-than-thou behavior in an interview with his daughter, Jenna Bush Hager.

I introduced him to Putin. Putin kinda dissed him. Like, ‘You really call that a dog?’

Scottish terriers are dogs too, Putin. Just because you don't like tiny dogs doesn't mean they don't have feelings. (Disclaimer: I own small dogs.)

The jab was more than just your everyday head-of-state jokin' around, too. (Do heads of state joke around?). Putin brought up the gag again when Bush visited him in Russia. This time, he sent in his own hound to really bring the joke home. Bush said:

A year later your mom and I go to visit Vladimir at his Dacha outside of Moscow and he says ‘You’d like to meet my dog?’ Out bounds this huge hound, obviously much bigger than a Scottish terrier, and Putin looks at me and says: ‘Bigger, stronger, and faster than Barney.’

You'd think a guy this into his pets would be less inclined to euthanize strays in Sochi, but that's Vladimir for you. Inconsistent, frequently cruel, strikingly handsome, and totally down to play the mine's bigger than yours game.

Long story short, Bush is now working through his trauma by painting Putin.

I said, ‘Wow, anybody who thinks "my dog is bigger than your dog" is an interesting character.' And the painting kind of reflects that.