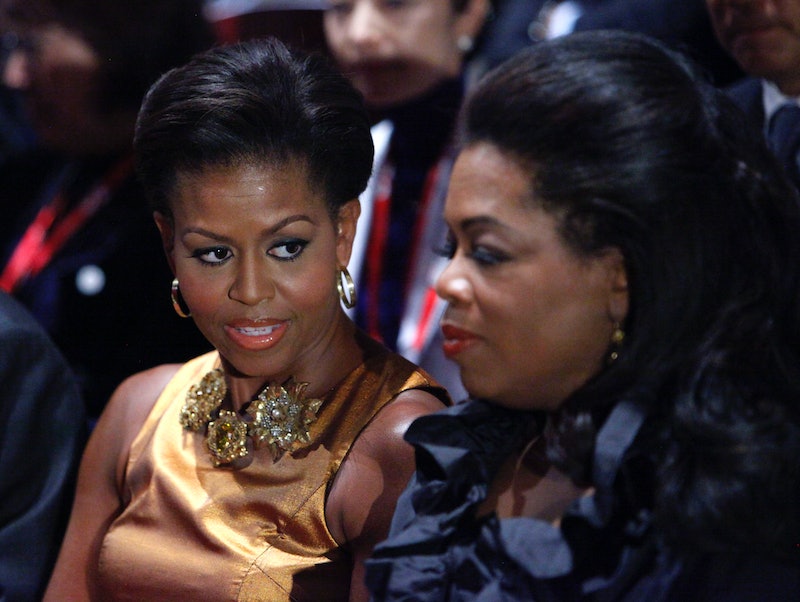 In what would be her last interview as first lady, Michelle Obama spoke with Oprah Winfrey last week from the White House, with the segment first airing as an Oprah Special on CBS on Monday. During the interview, the first lady imparted some of her valuable wisdom from the last eight years that she has spent on 1600 Pennsylvania Avenue. Although she'll soon vacate the White House, Obama's best quotes from the Oprah interview are one final reminder that she'll be missed greatly.

It wasn't the first time that Mrs. Obama had sat down with Winfrey. In fact, the first lady has given many interviews in Winfrey's company, including a recent conversation at the United States of Women Summit in June. During that event, the duo talked about the progress that women have made in recent years, as well as what remains to be done. That topic came up again in this week's interview, with Obama congratulating members of her team for the amazing work they have done in supporting her agenda throughout the administration.

At the same time, Obama couldn't resist throwing some shade at the incoming administration. She painted a stark contrast between the hope that Americans felt after her husband's election and the lack of hope she sees in the country today. But all in all, the first lady's conversation with Winfrey was both pointed and uplifting, a true reminder of the impression she has left on the American people.

Here are several of her most memorable quotes from the interview:

"Barack didn’t just talk about hope because he thought it was just a nice slogan to get votes. I mean, he and I and so many believe, I mean, what else do you have if you don’t have hope? What do you give your kids if you can’t give them hope?"

"We’re so afraid of each other. You know? Color. Wealth. These things that don’t matter still play too much of a role in how we see one another, and it’s sad because the thing that least defines us as people is the color of our skin."

"I wish we could have done something about gun violence. You know, we have spent so much time mourning with so many families."

On Her Advice To Women

"Live out loud, and understand that what’s in your brain is really useful. Do not hide it. Don’t dumb it down. Don’t apologize for it. Just put it on the table and let people deal with it."

On Why People Want Her To Run

"You know, the bad stuff I just don’t hold onto ... My mother always taught me, girl, you better keep it moving. You know? You better brush it off."

On Her Husband's Legacy

"You know, it’s like the toddler that bumps his head on the table, and they look up at you to figure out whether it hurts. And if you’re like, 'Oh my God,' they’re crying. But if they’re like, 'You know what, babe, it’s okay. It’s okay.' And I feel that way about the nation. I feel that Barack has been that for the nation in ways that people will come to appreciate ... Having a grown up in the White House who can say to you in times of crisis and turmoil, 'Hey, it’s gonna be okay.'"

She has about a month left in the White House — and, no, she doesn't plan to return as president someday. But like her husband, Mrs. Obama will leave a lasting legacy behind her, a legacy of female empowerment, undying optimism, and so much more.

More like this
10 Times Diana & Meghan Spoke Similarly On The Royal Family
By Sophie McEvoy
How To Support Gun Control Reform Right Now
By Morgan Brinlee and Carolyn Steber
25 Manifestation Quotes From Lady Gaga, Oprah, & More
By Megan McCarty
The Church Of Scotland Votes To Allow Same-Sex Marriages
By Sam Ramsden
Get Even More From Bustle — Sign Up For The Newsletter