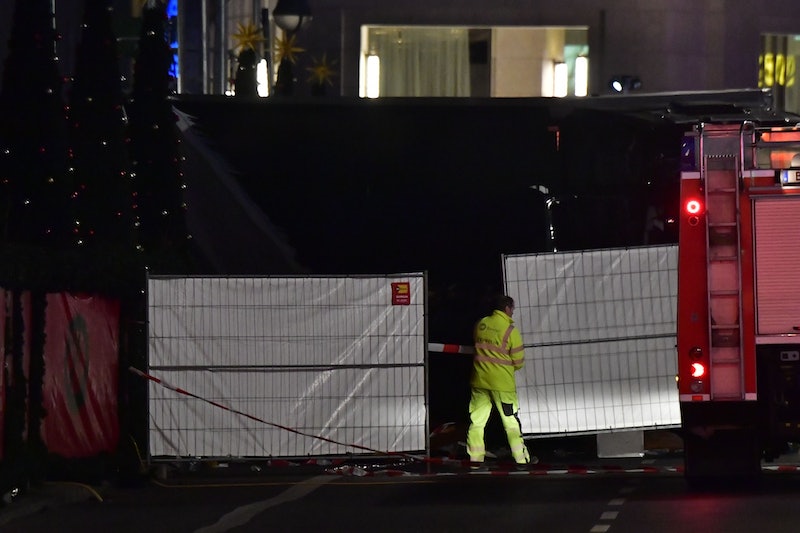 Early Tuesday morning local time in Germany, Berlin police assumed the Christmas market accident was intentional. Investigations into what law enforcement is now presuming to be an attack are continuing. Berlin police released the official statement via Twitter. The translation says:

"Our investigators assume that the truck has been intentionally controlled [directed] into the crowd at the Christmas market on the #Breitscheidplatz."

The tragic incident happened Monday evening when a truck plowed into a crowd at a Christmas market in the capital's center. Though a suspect had been identified early on, German officials refrained from calling the incident a "terrorist attack," The Guardian reported. Germany’s interior minister Thomas de Maizière initially told Berlin's ARD television:

"We are interrogating a suspect. We don’t know anything yet about the background but we won’t rest until this has been totally clarified ... I don't want to use the word 'attack' yet at the moment, although a lot speaks for it. There is a psychological effect in the whole country of the choice of words here, and we want to be very, very cautious and operate close to the actual investigation results, not with speculation."

A suspect was found less than two miles from the market, while a Polish man was found dead inside the vehicle. However, police confirmed the man inside of the vehicle was not the person driving. Ultimately, what's has now been confirmed as an attack claimed at least 12 lives and injured dozens of others.

German authorities were right to exercise caution in labelling the attack prematurely, given how Islamophobia has led many to erroneously associate terrorism with Muslim people. Angela Merkel's call for a burqa ban on Dec. 6 echoes that growing xenophobia, as does Donald Trump's mention of a Muslim registry during his campaign. In fact, the United States' president-elect was quick on Monday to blame ISIS for the Christmas market attack, calling the incident a “horrifying terror attack." And though ISIS did claim responsibility for the tragedy later that same day, the validity behind the militant group's claims have not been confirmed by German authorities.

As the investigations continue, the international community is standing in solidarity with the dozens of victims of the incident, supporting their loved ones through the horrific ordeal. And in the upcoming days, it's possible Berlin police will find a motive behind the attack that's now officially being investigated as a presumably intentional act.