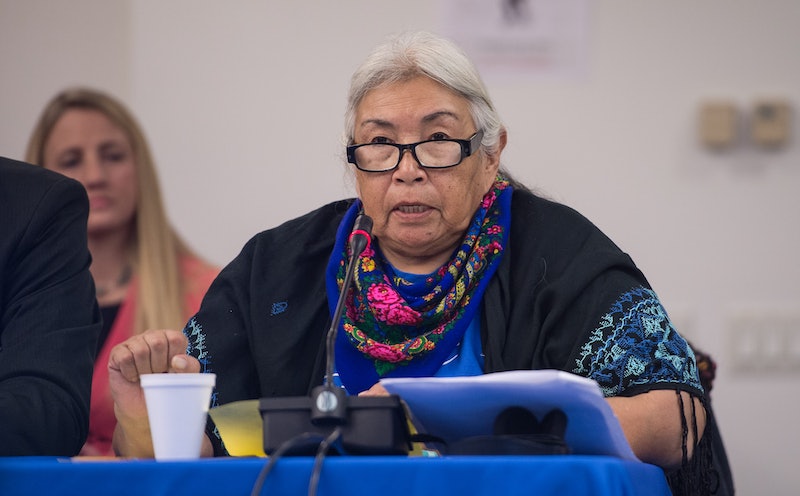 In the month leading up to Monday's Electoral College vote, there was a large amount of pressure on the Republican electors to deny Donald Trump the 270 votes needed to win the presidency. They were bombarded by a huge number of emails, some asking them to vote for the popular vote winner, Hillary Clinton, and others just pleading that they consider anyone else — even a Republican — who surely wouldn't be as bad as Trump. In the end, a mere two defected from Trump, whereas five Dems jumped ship from Clinton. So who is Faith Spotted Eagle? She received one Electoral College vote in Washington State.

There were four total faithless Democratic electors from Washington (three voted for Colin Powell). Another in Hawaii voted for Bernie Sanders. Republicans saw two from Texas — one who voted for John Kasich and the other who voted for Ron Paul. Of the bunch, Spotted Eagle's name drew the most attention, particularly from commentators on Twitter. She is a Native American elder and activist from South Dakota who has been highly involved in the No DAPL protests against the Dakota Access Pipeline, as well as the fight against the Keystone XL pipeline before that. For now, both protests seem to have resulted in victory. Earlier this month, the Army Corps of Engineers said it would explore other DAPL routes. Spotted Eagle expressed her excitement to The Daily Mail: "The easement has been denied. We have all come to this gathering being hosted by Mother Earth. I love you all," she said.

There are a number of times Spotted Eagle has spoken on such issues. She began her activism in the 1990s, when she created the Braveheart Society, which advocates for environmental justice and healing sexual assault survivors. She explained to Indian Country Media Network the importance of her work:

The only way to get out of this assault on Mother Earth is through prayer, healing and unification among races and various populations, public outcry and the assertion of both our treaty rights and our reserved rights, even in unceded territories. We are occupied peoples but maintain our tie to the land and that makes us sovereign with the earth and all living things.

The immediate response on Twitter to her win was offensive at best. Several users, and even one Seattle news station, seemed not to understand that Faith Spotted Eagle is her real name. KOMO News initially put her name in quotation marks, and others thought the elector was just voting for a "funny" or "memorable" name. Obviously, that's not the case.

While voting for someone other than Clinton may be contentious, there's no doubt that Faith Spotted Eagle is a great leader. Perhaps someday the United States will be ready to elect a Native American president — not just one vote as a show of support in the Electoral College.