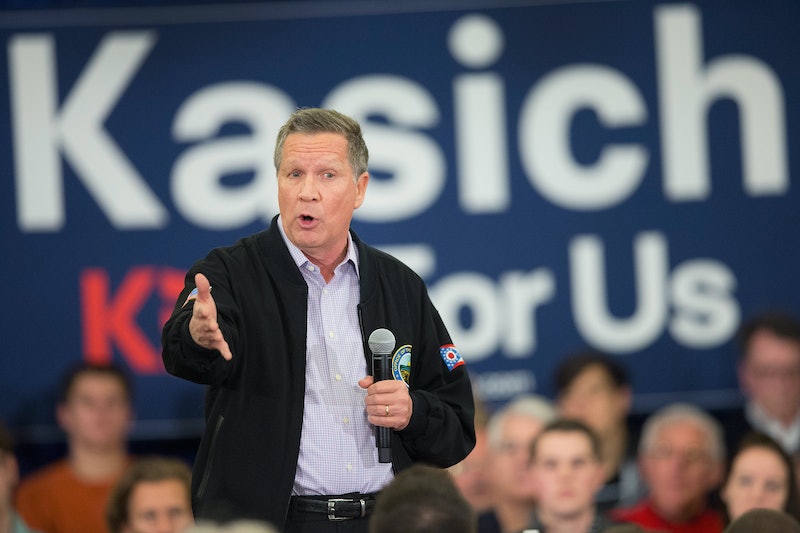 Although the Governor of Ohio was one of the most popular alternatives toted by anti-Donald-Trump Republicans, John Kasich received just one Electoral College vote on Monday. While electors' votes are secret, Christopher Suprun of Texas, who recently captured the public's attention by becoming the first Republican elector to declare he'd be voting against Trump, published an editorial for The Hill revealing that Kasich would get his vote.

"Never in American history has a president-elect presented more conflict of interest questions and foreign entanglements than Donald Trump," he wrote. "Surely, electors have a constitutional duty if, after the popular vote but before the electoral vote, there emerges credible evidence that they are electing someone who is constitutionally ineligible to serve as President."

Suprun first mentioned Kasich's name in the New York Times op-ed in which he announced his intention to be faithless. "I believe electors should unify behind a Republican alternative, an honorable and qualified man or woman such as Gov. John Kasich of Ohio," he said.

The day following Suprun's article, Kasich posted a statement on Twitter asking electors not to send their votes his way. "I am not a candidate for president and ask that electors not vote for me when they gather later this month," he wrote. "Our country had an election and Donald Trump won. The country is divided and there are certainly raw emotions on both sides stemming from the election. But this approach, as well meaning as it is, will only serve to further divide our nation, when unity is what we need."

Suprun was in favor of leaving the final decision of electing the next United States president to the House of Representatives. The mostly-Democrat "Hamilton Electors" spent weeks working toward the same goal, though with a different result in mind. Whereas Suprun hoped enough electors would turn away from Trump to cause his electoral count to sink below the required 270 so that the Republican-controlled House would get the opportunity vote for a more conventional candidate, the Hamilton Electors believed their chances of persuading four Republican House members (the number of defections needed for a Clinton Victory) to vote Democrat was greater than convincing 37 conservative electors to go blue.

Since sending it to the House would have given the Republicans 29 votes versus the Democratic Party's 21, Suprun's preferred course of action would actually not have been so outlandish. It would have required widespread Republican cooperation, however — first to get electors on board, and then to get House members on the same page.

Overall, there were seven faithless electors in 2016 — five Democrats and two Republicans. Both Republican defectiors hailed from Texas, including Suprun's vote for Kasich and one ballot for Ron Paul.