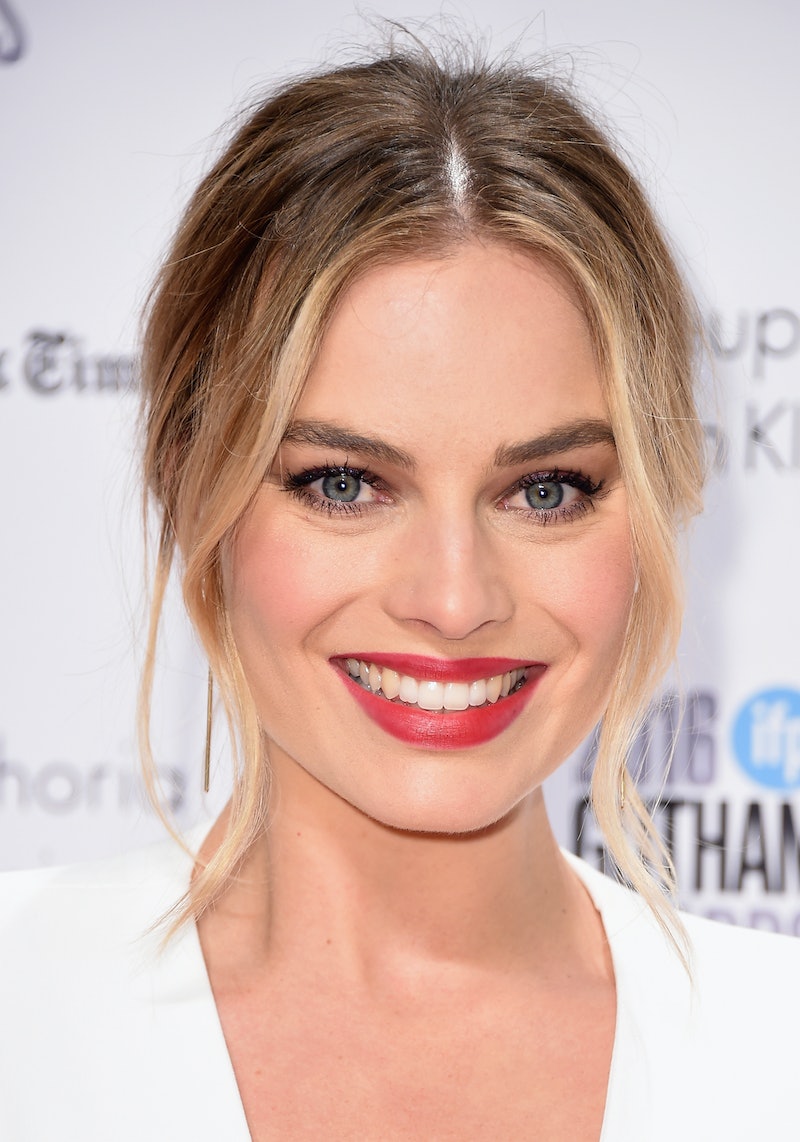 There are some celebrities who are content to let rumors and gossip surround them and never confirm nor deny their validity. A certain level of zen and experience in the industry is most likely required to reach that point. But, then there are others who take a more, well, direct approach, and that's just fine, too. Case in point, rather than let the marriage rumors run rampant, Margot Robbie posted a picture of her ring on Instagram and, seemingly, went and confirmed the news herself. (At the time of reports that Robbie had married, Bustle reached out to her rep, but did not receive a response.)

Without saying anything at all, the actor said just about everything. The picture shows Robbie and who appears to be with her reported new husband, Tom Ackerley, smooching out of focus. But, the real kicker is the object that is in focus. The Suicide Squad actor holds out her arm and sticks up her ring finger that has a very beautiful and very specific-looking ring around it. Basically, Robbie seems to have admitted to the world that, yes , she is married. But the picture honestly seems like it means a lot more than just that.

While the photo may not be captioned, the very deliberate way Robbie is sticking up her ring finger is enough to determine what she would have written if she weren't so kind. Because, I don't know about you, but the only finger I've ever gestured like that with is my middle one.

The message that she's sending is quite clear and sassy and it proves she's not afraid to tell it like it is. The Australian may be sorta, kinda asking people to mind their own business in a round-about way. Or, at the very least, telling those gossiping to wait for the confirmation to come directly from the source. After all, Robbie may be low-key about her personal life, but it's not like she's super secretive or anything.

She even told Vogue in March 2016 about Ackerley:

"...We were friends for so long. I was always in love with him, but I thought, 'Oh, he would never love me back. Don’t make it weird, Margot. Don’t be stupid and tell him that you like him.' And then it happened, and I was like, 'Of course we’re together. This makes so much sense, the way nothing has ever made sense before.'"

See? It's very likely that Robbie would have revealed her marriage in her own time. But, it is what it is and it's apparent that although the actor may be slightly put off by the rumors, she's too damn happy to care that the news was spoiled by someone other than herself.

More like this
The 1st Photo Of Priyanka & Nick's' Baby Comes After 100 Days In The Hospital
By Jake Viswanath and Hugh McIntyre
Is Megan Fox Pregnant? MGK Gave A Shout-Out To Their “Unborn Child” Onstage
By Hugh McIntyre
Rebekah Vardy & Coleen Rooney’s Trial Has Officially Begun
By Bustle UK
Harry Styles Opened Up About Olivia Wilde With A Rare Comment About "Trust"
By Sophie McEvoy
Get Even More From Bustle — Sign Up For The Newsletter