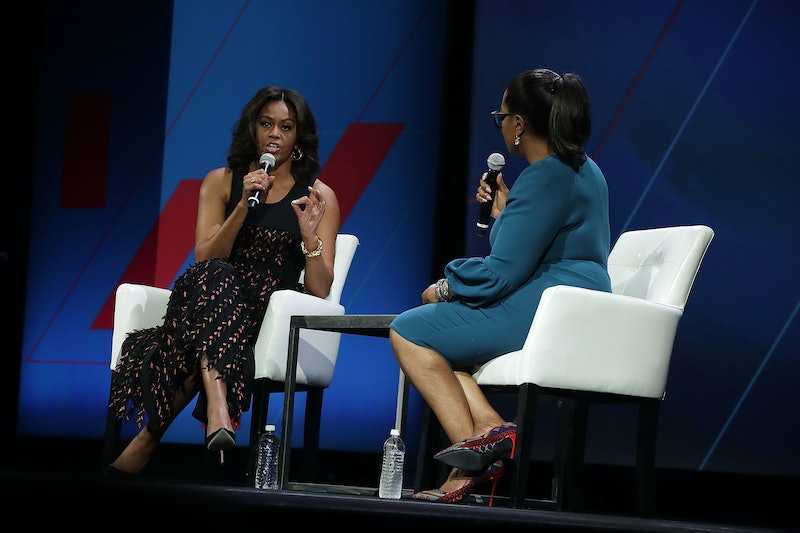 The Obamas are leaving the White House. They're throwing their last Christmas parties, packing up, and yes, giving their final interviews. In one of the first lady's final conversations with journalists in the White House, Michelle Obama sat down with Oprah Winfrey to talk about the difficulties of serving, her hope for the future, and why she won't be running for office anytime soon. The interview was candid, serious, and a fitting farewell for such a beloved public figure, and you should watch the whole thing. But there is one line from Michelle's interview with Oprah that you'll definitely relate to.

Think back to Nov. 8 and your election party, when you and your friends were gathered around the TV to ring in the election of the first woman president. Michelle Obama was right there with you. "This past election was challenging for me as a citizen to watch and experience. It was painful," she told Oprah, putting her experience in language that explains the difficulty the majority of the nation's voters felt when Clinton, the popular vote winner, was taken down by Trump's Electoral College victory, carried by Rust Belt states of Michigan, Ohio, Pennsylvania, and Wisconsin.

Obama also shared what it was like to wake up to the news, as she had gone to sleep not knowing who the winner was. "I got up and I looked at my iPhone,” Obama told Winfrey. “And I saw it." She went on to explain that it wasn't a total surprise. "Well, pretty much, you know, you kind of saw the tea leaves,” Obama said. “I kind of felt like how things were going by the time I went to bed." She went on to explain that she had sort of mentally prepared herself for the news even before she knew what happened.

While the news itself was challenging, she explained to Winfrey that she has told Melania Trump that she will be a resource even after the Trumps move into the White House:

My offer to Melania was, you really don’t know what you don’t know until you’re here, so the door is open, as I’ve told her and as Laura Bush told me and other first ladies told me. We will do whatever they need to help them succeed.

The Bushes offered the same thing to the Obamas, Michelle said. But that was in contrast to the way that many other GOP leaders treated them, she said. Obama told Winfrey that she and the president are trying to be supportive of the "transition" because "words matter" and that their personal views don't hold a candle to the "health of the nation" — even though that wasn't always the case in 2009.

She went on to paint a picture of how difficult the President had it upon taking office:

Michelle and the family may continue to go high into the New Year, but it must be extremely frustrating that their preferred candidate, Clinton, won't be in the White House to safeguard all of Obama's hard-fought wins. Now they will attempt walking a fine line between respectful and assertive. That will not be easy.

Watch Obama's full interview with Oprah Wednesday night when it re-airs on OWN at 9 p.m. ET.