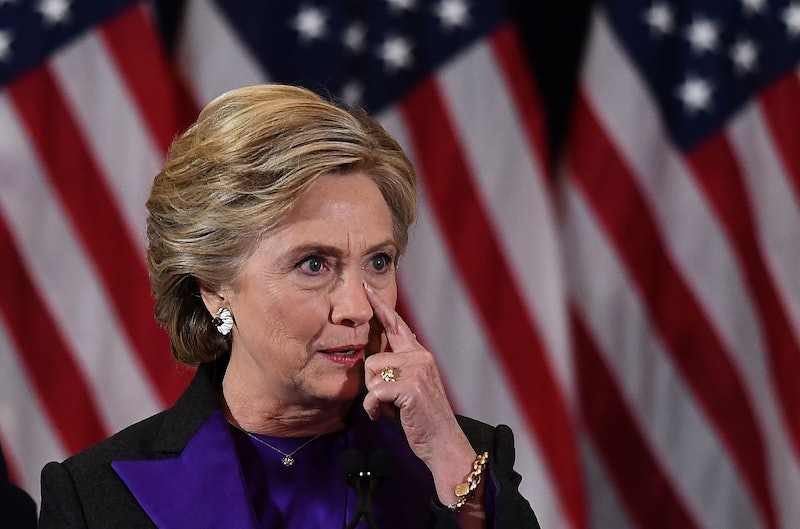 After weeks of speculation and build-up, the Electoral College vote ended up surprising everyone, and not in a way that was kind toward Democratic presidential nominee Hillary Clinton. That's because even though she won a decisive majority of the popular vote ― a legitimacy-granting cherry on top of her state-by-state map, where she fell three battleground states short ― she actually suffered more defections by faithless electors than Donald Trump did.

In total, Clinton received a full five electoral votes fewer than what her victories would've suggested she should have, headlined by four defections in the state of Washington, and one in the state of Hawaii. Three other Democratic electors (in Maine, Minnesota, and Colorado) attempted to abandon her, but were subsequently replaced.

By contrast, a mere two electors broke from Trump, despite the pressure applied by the so-called "Hamilton electors," and those eleventh-hour, obviously ineffective, and somewhat deeply embarrassing Martin Sheen videos. In other words, after so many people wondered whether Trump's massive and unresolved conflicts of interest could cost him votes, especially with an opponent who soundly thumped him in the popular vote, the outcome was much the same as the general election was. Republican unity around Trump, in other words, seemed to be stronger than Democratic unity around Clinton.

This was surprising given the assumption that more GOP electors might be wary of Trump, although there had been rumblings about a couple of electors refusing to back Clinton even before the election. And frankly, if you're a political progressive or a Clinton supporter, it has to feel like deja vu of the most ridiculous and infuriating kind ― while it's hardly news these days, weeks after Election Day, the fact that some people are so much more worried about or hostile towards Clinton than they are Trump is hard to stomach.

To be fair, three of the votes Clinton lost in Washington seemed to be part of that "Hamilton elector" scheme, in which a trio of Democrats cast ballots for former Secretary of State Colin Powell rather than Clinton, in the hopes of luring dozens of Republican electors to do the same. That didn't work, needless to say, and even if it had it wouldn't have changed the outcome ― if Trump had sunk below 270 votes, but Clinton wasn't the beneficiary of all of the defections, it merely would've meant the election would've gone to the GOP-controlled House, which would've picked Trump.

That's the main reason why the plan was essentially bunk from the very start. If you were pinning your hopes on congressional Republicans usurping the man their party's base just elected, suffice to say you were going to be disappointed. A movement that unabashedly urged Trump-wary Republican electors to break for Clinton, while it plainly would not have worked either, would have at least been more practically honest, as it was the only true route to defeating Trump, and more democratically credible, too.

While Clinton's popular vote lead should give her fair claim to the office, none of the people who siphoned away votes from her ― not Powell, nor Vermont senator Bernie Sanders, nor Native-American activist Faith Spotted Eagle (as great as it was for her to get some national recognition) ― have any such legitimacy argument behind them.

Losing five electors to defection is a record in American presidential elections. And so, the sad upshot: in the first instance of a major political party nominating a woman as its presidential candidate, she won the popular vote handily, lost the Electoral College by less than 80,000 votes across three states. And when it came time for her to receive the credit she did earn, through that very same arcane system that cost her the presidency, a handful of electors decided to shake out some salt on the wound and drag some sandpaper over it.