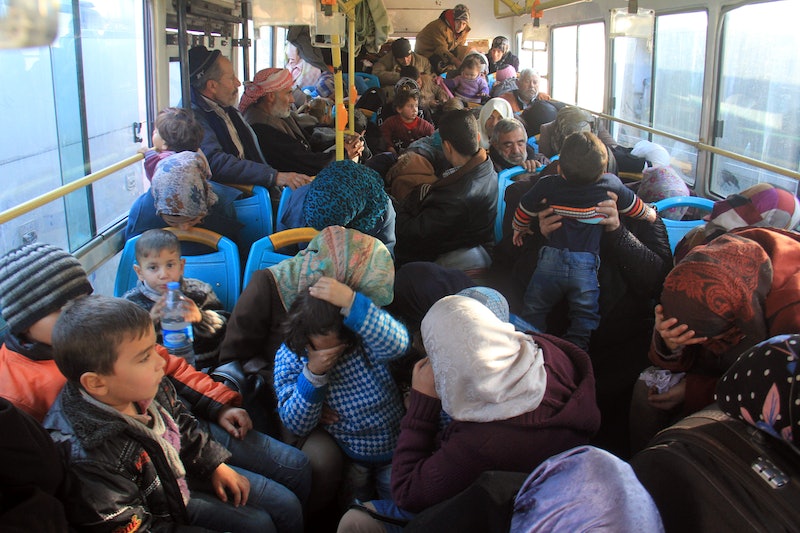 In September, Fatemah al-Abed, a woman trapped in the war-torn Syrian city of Aleppo with her three children and husband, created a Twitter account to share the experiences and thoughts of her seven-year-old daughter, Bana. The tweets were shared tens of thousands of times, and Bana soon became the face of Syrian suffering. On Dec. 19, those following her journey were relieved to learn that Bana finally escaped Aleppo with her family. After months of sharing horrors she faced on a daily basis — including the constant presence of nearby bombs, almost dying after her family's home was bombed, discovering the body of her friend, the destruction of her school and murder of her classmates — Bana reached safety. But as soon as they made it out, the girl's mother reminded the world that it was not yet time for celebration.

"I can't & we can't all be happy until all the remaining people who want to leave are evacuated from East Aleppo," Fatemah tweeted. During an interview with a reporter, she continued to push the message. "Me and Bana want to tell all the world how much kids and all people in East Aleppo, how much they are suffering from bombs and everything because there is no life there."

According to the IHH Humanitarian Relief Foundation, approximately 10,000 people were evacuated between the night of Dec. 18 and the following day; Robert Mardini, Regional Director of the International Committee of the Red Cross, estimated that 25,000 people had been evacuated from East and Western Aleppo since Dec. 15.

The Associated Press reports that roughly 3,000 civilians and rebels remain in Aleppo and that 60 buses have been deployed to transport those still there to safety. While this seems encouraging, it's critical to remember that Aleppo is only one of the regions in Syria where civilians need help.

Humanitarian organizations shared images of the newly-escaped refugees, many of them children. "We're happy to share that the 47 orphans who pleaded for their evacuation from E. #Aleppo last week were safely evacuated to #Idlib," shared the Syrian American Medical Society. The IHH posted the photo of a small boy smiling at a dessert in his hand with the comment, "A little child who evacuated from #Aleppo yesterday seemed very happy with his cake and new clothes."

While these recent updates are positive and definitely worthy of celebration, it's important to continue helping until no one else is living Bana al-Abed's previous reality.