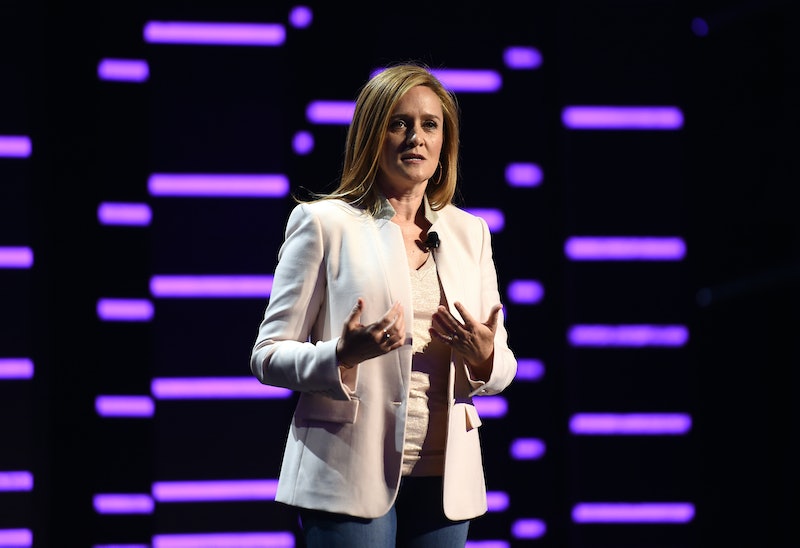 After the election, there's been a lot of different feelings floating around. Despair, worry, nervousness, fear, and panic are just a few things that many Democrats (and even never-Trump Republicans) have been digesting the last month or so. As many on the left look for answers and solutions and formulate plans to look forward, there's been one surprising voice coming from the right joining in. Glenn Beck, the conservative radio host, has gone on an apology tour of sorts, and his latest stop was pretty unexpected. On Monday's episode of Full Frontal, Beck met with Samantha Bee to talk about Trump and the fear he's stoked in America.

Beck is known for his doomsday attitude toward politics, and this fear heightened in 2008 when now-President Barack Obama emerged as a serious presidential contender. He spent a lot of time and energy attempting to discredit Obama and his background, and even called Obama a racist once. But now that his insistence that Obama's presidency was bad for America has been proven wrong, he's taken some time to reflect on why he should not have gone on the attack so directly and quickly and realizes that he is partly responsible for the hysteria that led to Trump's election.

And that reflection has miraculously led him to a conversation with Bee, who, while is very clearly a progressive Democrat, as demonstrated in the few minutes at the beginning of the segment doesn't pull punches when the left needs to be called out.

Bee and Beck come from two opposite sides, and they both realize that. But during the interview, they attempted to maintain cordial and recognized that fear-mongering is not necessarily a productive way to educate the public — while wearing festive Christmas sweaters. Beck asked the question that many of Bee's viewers were likely wondering: "Why would you have me on if you don't want to mock?" Bee's response:

I think that our future is going to require a broad coalition of non-partisan decency. It's not just individual people against Donald Trump. It's all of us against Trumpism. So I actually think it's important to reach into places where we wouldn't normally reach.

And Beck, with his newfound somewhat rational behavior, seemed to understand this and want the same thing. He said:

I agree. I said yes to you because I believe, when I watch you, I believe you actually don't want to do damage. As a guy who has done damage, I don't want to do anymore damage. I know what I did: I helped divide. I'm willing to take that. My message to you is please don't make the mistakes that I made. And I think all of us are doing it. We're doing it on Facebook, we're doing it on Twitter. We tear each other apart and we don't see the human on the other side.

Beck did issue a warning to Bee, saying that after watching her show, he sees some of his catastrophe rhetoric in her monologues, to which Bee responded that he's going to make her cry and she's having a Christmas crisis.

They ended the segment by holding hands and eating cake together, which, while certainly awkward, was a very unexpected act for two people who hold such different beliefs. Bee said at the beginning of the clip that her viewers are going to think she is trying to normalize Beck, and that's certainly one way to look at it. However, the partisan divide is out of control, and it is something that was harmful in this election. If working with someone from across the aisle (way, way across the aisle) toward a better future for the country and trying to prevent such a loose cannon from being elected president ever again is normalizing, it might not be the worst idea.