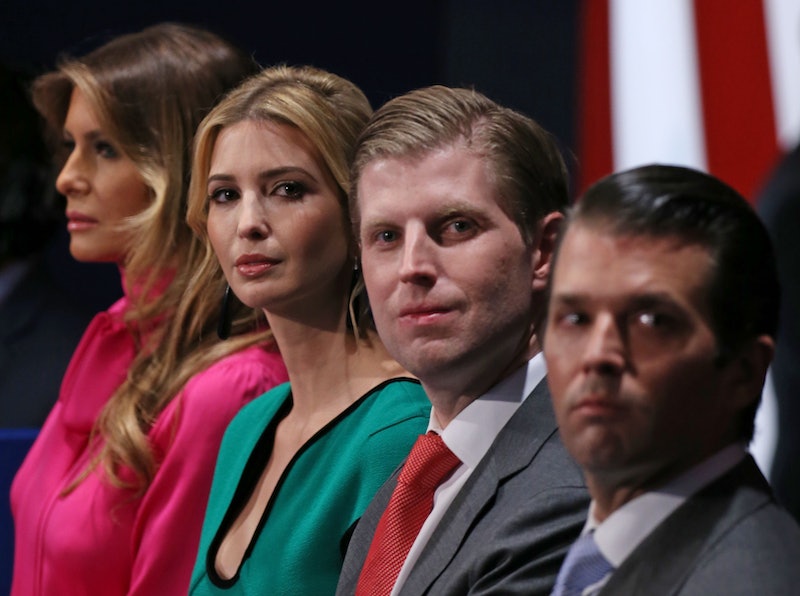 I got an email Monday afternoon with the subject line: "Big League Christmas Deal Inside." As you may have guessed by the adjective we've become used to this year, the email was from DonaldJTrump.com, whose listserv I signed up for while covering the campaign. It advertised objects like the much-ridiculed Trump Christmas ornament and MAGA hats that can be bought at Trump's still-operating campaign shop, part of the Make America Great Again Committee, a joint fundraising committee between Trump's 2016 campaign and the Republican National Committee.

Campaigns sell plenty of merchandise during the election as a means of raising funds, and it's not completely out of the ordinary for a victorious one to keep fundraising even after the voting is over. But the Trump campaign/transition, despite spending so much time back during the primaries insisting the self-professed billionaire didn't need to fundraise and would, therefore, be independent, has taken a particularly brazen tack on bringing in cash for his political operation, for those around him, and even for himself. The sale of Christmas gifts for a campaign committee, even if they seem more like marketing emails from department stores than the future leader of the free world, are pretty small-bore. However, there are growing concerns about what the Trump family may be selling that are a little more worrisome.

Ivanka Trump landed in hot, lightly caffeinated water last week when she tried to auction off a coffee meeting for charity. While it certainly may have been well-intentioned, The New York Times reported that it raised ethical concerns as a potential way to spend money for access to one of the president-elect's top advisors. Eric Trump denied anything unethical was occurring, saying it was "nothing more than an effort to raise a lot of money in an effort to help sick children." The coffee date was cancelled after people realized how awful it looked, but that hasn't stopped the Trump family from finding new ways to raise money in exchange for meeting with them.

According to reports by The Center For Public Integrity and TMZ (2016 makes strange bedfellows), Trump's sons Donald Jr. and Eric have founded a nonprofit organization in the past week, entitled the Opening Day Foundation, and are soliciting donations in exchange for access to the incoming president and his children. A million dollars earns an invitation to an exclusive 16-guest event with Trump, while $500,000 will get you a ticket to a 4-day hunting trip with his sons. Since Opening Day is a non-profit, not a political committee, they don't have to disclose donors.

The Foundation claims to be involved in conservation, and with the Trump brothers' well-documented enthusiasm for hunting, this could likely be the genuine intention. Transition team press secretary Hope Hicks emailed the following statement regarding the concerns about Opening Day:

The Opening Day event and details that have been reported are merely initial concepts that have not been approved or pursued by the Trump family. Donald Trump Jr. and Eric Trump are avid outdoorsmen and supporters of conservation efforts, which align with the goals of this event, however they are not involved in any capacity.

At the same time, considering Trump's tendency to appoint donors to his administration, as well as his sons' plan to run the Trump Organization as a separation of Trump from his businesses, I believe it it should be treated with extra scrutiny. Hillary Clinton was hit hard during the campaign for what seemed like possibly giving increased access to the State Department to donors to her family's foundation, and that was for a well-respected charity that did reveal its donors. We should be just as concerned about this kind of behavior from her opponent.

All these come as Trump continues to flout conflict of interest issues with his businesses, which ethics lawyers for both the Bush and Obama administrations suggest could violate the Constitution. Trump canceled the press conference scheduled for Dec. 15 to discuss the conflict of interest issue and has not rescheduled. ThinkProgress reported on Monday that Kuwait's embassy changed the location of an event to Trump's hotel after a source told the outlet the embassy was being pressured to do so by the Trump Organization. Ambassador of Kuwait, Salem al-Sabah, denied the change was due to any political pressure. a representative for the Trump Hotel in Washington D.C. declined to comment.

Throughout Trump's campaign, he argued that because he was so rich, he'd be free from the corrupting influence of money that other politicians faced. I am still waiting for him to actually prove that.