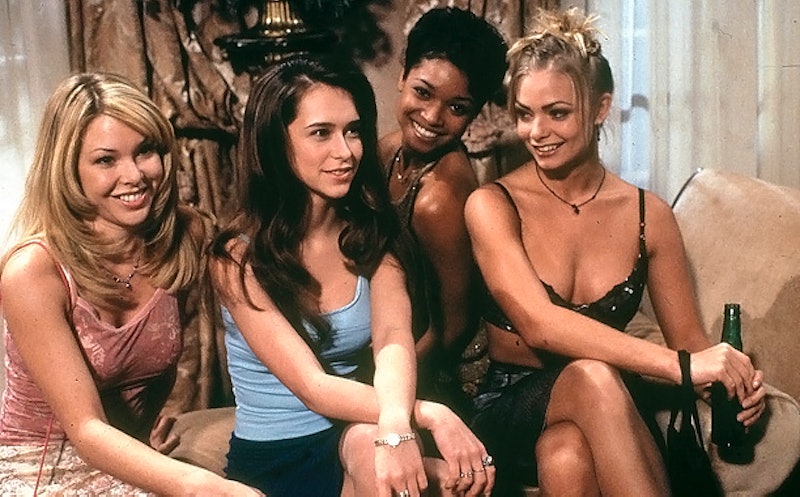 Nineties kids came in all shapes and sizes, and there were some very distinct types of '90s child you could be. Of course, everyone has their own distinct personality and tastes, but most of us still fit into clear categories in the '90s. These were based around our style, the music we liked, the culture we prescribed to, and how we socialized with the world around us. Most of these genres of '90s kid had their anchoring in a pop culture character, but they were also very real world personalities. Life imitated art and art imitated life: what came first, the chicken or the egg?

You could also be a mix of these types of '90s kids. For instance, some grunge kids were also super into the occult, so you'd listen to Nirvana while doing seances. And the wholesome gal was also probably giving off a girl next door vibe, and might also have been a teeny bopper, or a well read introvert. Obviously, no one is only one thing all the time, and personalities have a lot of different elements. If you lived through the '90s, you'll recognize a lot of these personality types as being very specific to the era. Here are eleven kinds of '90s kid you could be.

You were sweet and naive and wore a lot of headbands and cropped, fitted cardigans. You didn't mess around with boys, and you got good grades in school. You were popular and sweet and just generally a little angel, weren't you?

3. The Kid Next Door

You were pretty nondescript. You lived in the "friend zone" (not in the patriarchal sense of the word, more in the will-they-won't-they sense of Joey and Dawson, for instance), perpetually crushing on your bestie but never with enough guts to say anything. You were loyal, down to earth, and had a good sense of humor.

And then there was the '90s kid who tie dyed EVERYTHING. If that was you, you probably also had army fatigue combat pants, Dr. Martens, and blue hair mascara, and also burned a lot of incense.

The coolest kids in the '90s listened to grunge music, had dirty blonde (sometimes bleached in a messy way that is kind of in vogue now) hair, oversized grandpa cardigans and ripped jeans. If that was you, you hated "the man" and may or may not have uttered the sentence "Courtney did it" at one point.

The Craft spawned a very special generation of kids who were convinced they could get "Light as a feather, stiff as a board" to work, and who spared not a single moment in trying.

You were like a teen soap opera everywhere you went. Like Jessie Spanos on drugs. You didn't just watch Cruel Intentions, you lived it. Controversy followed you everywhere, and you were a pro at sneaking out of your bedroom window at night.

You had a snarky comment for everything, and loved Daria, modeling yourself and your best friendship after her and Jane. Dry and sarcastic, you were a real nihilist. If only '90s you could see the state of the world today...

In popular culture, your type was sold as a "freak" but by adult standards, you were super cool. Peer pressure couldn't touch you. You had hobbies and didn't mind being alone. What others saw as angst was just you being a little before your time, an old soul, fed up with the frivolousness of your classmates.

The '90s was a great time for trance and you were super into it. Maybe you were full hardcore, Ministry of Sound, or maybe more low key Groovejet kind of kid, but you knew how to bust out on the dance floor with glow sticks. Bjork was your style icon and you had a wardrobe full of white pants and neon crop tops.

You skipped in and out of cliques at your leisure, and flitted back and forth between whatever your new passion projected of the week was (regardless of whether they stuck or not). You didn't follow fashion trends — you set them. You came out of the womb confident, and although you were known for being a bit flighty, you loved hard when it counted most.

You crushed on one or both of Ethan Hawke or Julie Delpy. You considered yourself deep, and watched a lot of Kevin Smith films. You read books and would like to wax lyrical about literature. Nineties You had an existential soul, that was a little bit self-involved, but you read enough to back up your philosophical opinions with actual knowledge. Being around you was certainly challenging, but often in a good way.